Where does this association come from? Some psychologists (who probably had far too close a relationship with their mothers) would probably tell you because the colour red is associated with lips. You know, "blooming lips." Of the lady-sort... It's a biological response, is what I'm saying. Others would probably say the association derives from the Whore of Babylon, as mentioned in the Book of Revelation, being described as "a woman sit upon a scarlet coloured beast... arrayed in purple and scarlet colour, and decked with gold and precious stones."

Whatever the origin, the image of a beautiful woman dressed in red, leading us to our doom is a powerful cultural icon, one that we see occur over and over again in literature, and on screen. After the jump, take a look at nine such occurrences.

Carmen Sandiego, from Where In The World Is Carmen Sandiego
Across nearly all mediums, this red suited villainous has proven to be a tireless foe, taunting A.C.M.E. agents, and children, for decades. Indeed, what could be more malicious then using crime to teach children geography?

Scarlet Witch, from The Avengers
Possibly the most powerful character in the Marvel universe, Wanda Maximoff has the ability to rewrite the entirety of reality should she see fit. Unfortunately, her life has also been marked by tragedy, mental illness, depression and occasionally death. This makes the daughter of similarly red-suited mutant terrorist Magneto a dangerous member of the Avengers. 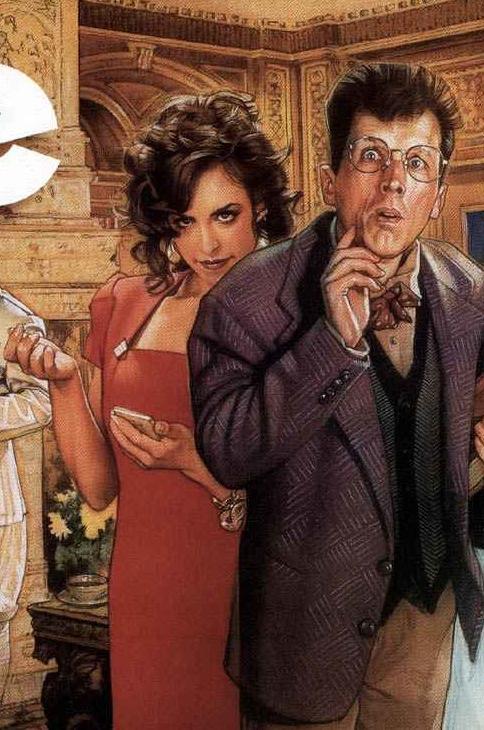 Often described as a seductress in the character descriptions, Scarlet fulfils the noir-trope of the femme fatale in the Cludo world. Played by Leslie Ann Warren in the 1985 movie, she was a high class madam that, bizarrely, wore blue.

Carice van Houten as Melisandre, in Game of Thrones

Described by Geroge R.R. Martin as "she wore red head to heel, a long loose gown of flowing silk as bright as fire, with dagged sleeves and deep slashes in the bodice that showed glimpses of a darker bloodred fabric beneath... Her hair was not the orange or strawberry color of common red-haired men, but a deep burnished copper that shone in the light of the torches... Many called her beautiful. She was not beautiful. She was red, and terrible, and red."

Next time you watch Casino Royale, watch the colours Vesper wears. Each colour is analogous to the role she is currently filling. She starts off in an authoritative purple (when she still holds sway over the money), moving to a depressed black (after the gun fight), to more Earth tones (when she falls in love with Bond), eventually having her nature revealed, and meeting her fate, in a fluttering red dress.

On the flip of that, and carrying none of the symbolism other then blatant seduction, is her appearance at the dance in last summer's abysmal Dark Shadows. Strutting into view, all eyes fall on the alabaster beauty in red.

Kelly LeBrock as Charlotte, in Woman in Red

A red dress and a swift breeze are all it takes to tear Gene Wilder's life apart in this 1984 film. Wilder plays a man who becomes obsessed with LeBrock's character after seeing her do a Marilyn on the street, and proceeds to hunt down the illusive woman in red.

Elizabeth Hurley as the Devil, in Bedazzled

What other colour would the Devil wear? And indeed, every costume Hurley wore in the 2000 film, from a cheerleader outfit, a bikini, to the above cat suit, was Hell-red. And Hurley, hot off the success of Austin Powers, did her very best to fill every wardrobe change.

Trica Helfer as Six, in Battlestar Galatica
Baltar's head Six wore the now famous, form fitting red dress that was guaranteed to bend the doctor's will to hers. Leaving aside the angel nonsense that later plagued her presence, Red Six was the perfect ambassador to the series: lean, sexy, and treacherous.

The cartoon that ushered an entire generation of boys (and some girls) into puberty. The dress alone defies most of the laws of physics, and several decency laws, but she who wears it, with her matching hair and lips, is the very definition of danger and allure, and the very best example of a woman in red.
Share on Facebook Share on Twitter Share on Google Plus