This time last year, HBO and the TIFF Bell Lightbox presented a unique exhibit to promote the premier of the second season of the Game of Thrones. It was a small exhibit, a collection of costumes and props from the first season, and promised a "sneak peak" at the new season. It was a very good exhibit, and immensely successful. Successful enough that HBO decided to do it again. This time though, they understood the wants of the increased audience. Launching this past week in Toronto, the revamped exhibit has twice as many articles on display, and will travel on to New York City, Sao Paulo, Amsterdam and Belfast. So, if you missed it in Canada, and can get yourself to one of these cities, do so. It makes for an enjoyable bit of evening.

After the jump, a break down of the exhibit, and my thoughts. 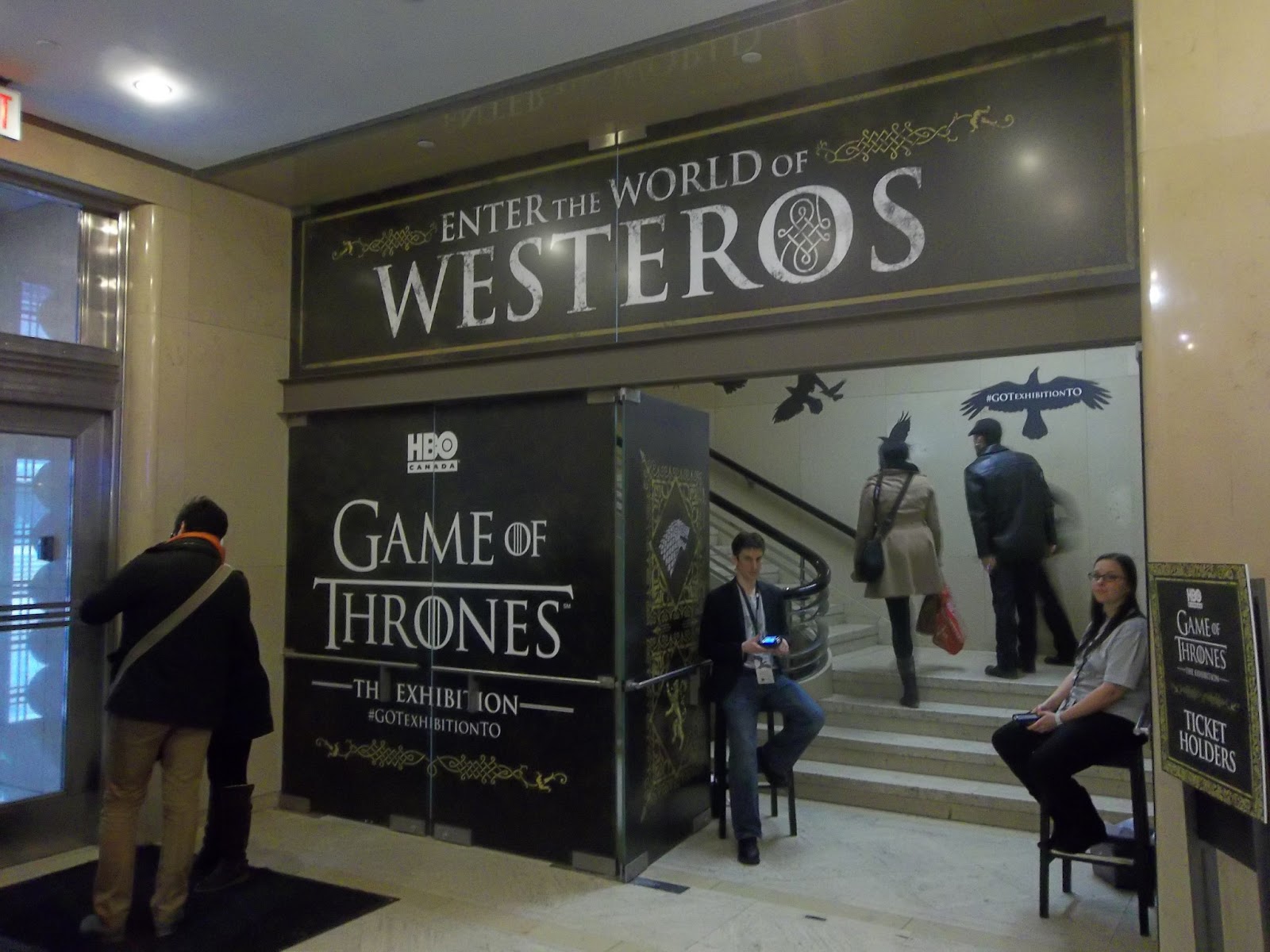 The location changed in this second year, and while I can speak with no authority as to why, I suspect it might have had something to do with space. As I noted after the amazing Designing 007 exhibit, the Lightbox in Toronto is a fantastic space that suffers from a tight restriction as to possible layout. So, this year, the Design Exchange, housed within the old Toronto Stock Exchange building, played host. Immediately, the change in venue was appreciated. The Lightbox had to place the Iron Throne in the lobby, which resulted in sever congestion at peak hours. The Design Exchange was able to house the entire exhibit on the second floor. This caused an entirely different sort of congestion.

What was nice was the Design Exchange allowed photography within the exhibit, which means I was able to document the entire exhibit without having to cull photos from HBO's publicity department. 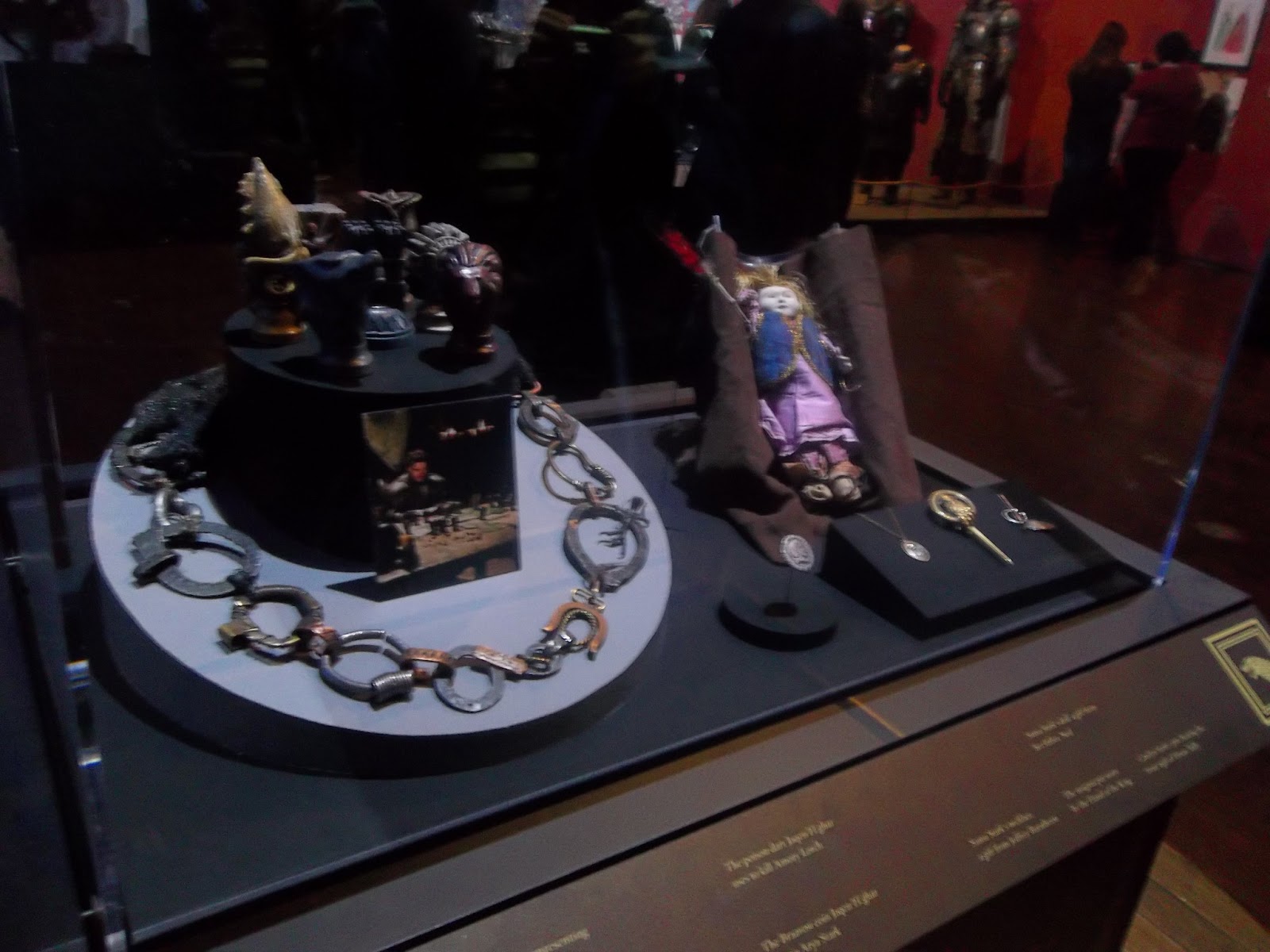 The exhibit was arranged by family, with the focus of the props (somewhat loosely) based on the characters best associated with them. The first family was, somewhat obviously, the Starks. Each section had a display case, and a costume display, along with supplemental video materials playing. The above image shows the first display case. To give an idea of the increase in viewable materials from last year to this, the only item above that was on display last year was the Hand of the King pin. New items include Rob's battle markers, Sansa's doll, various pieces of jewelry, and Maester Luwin's Maester's Chain, which I feel was my favourite non-weaponry item on display. 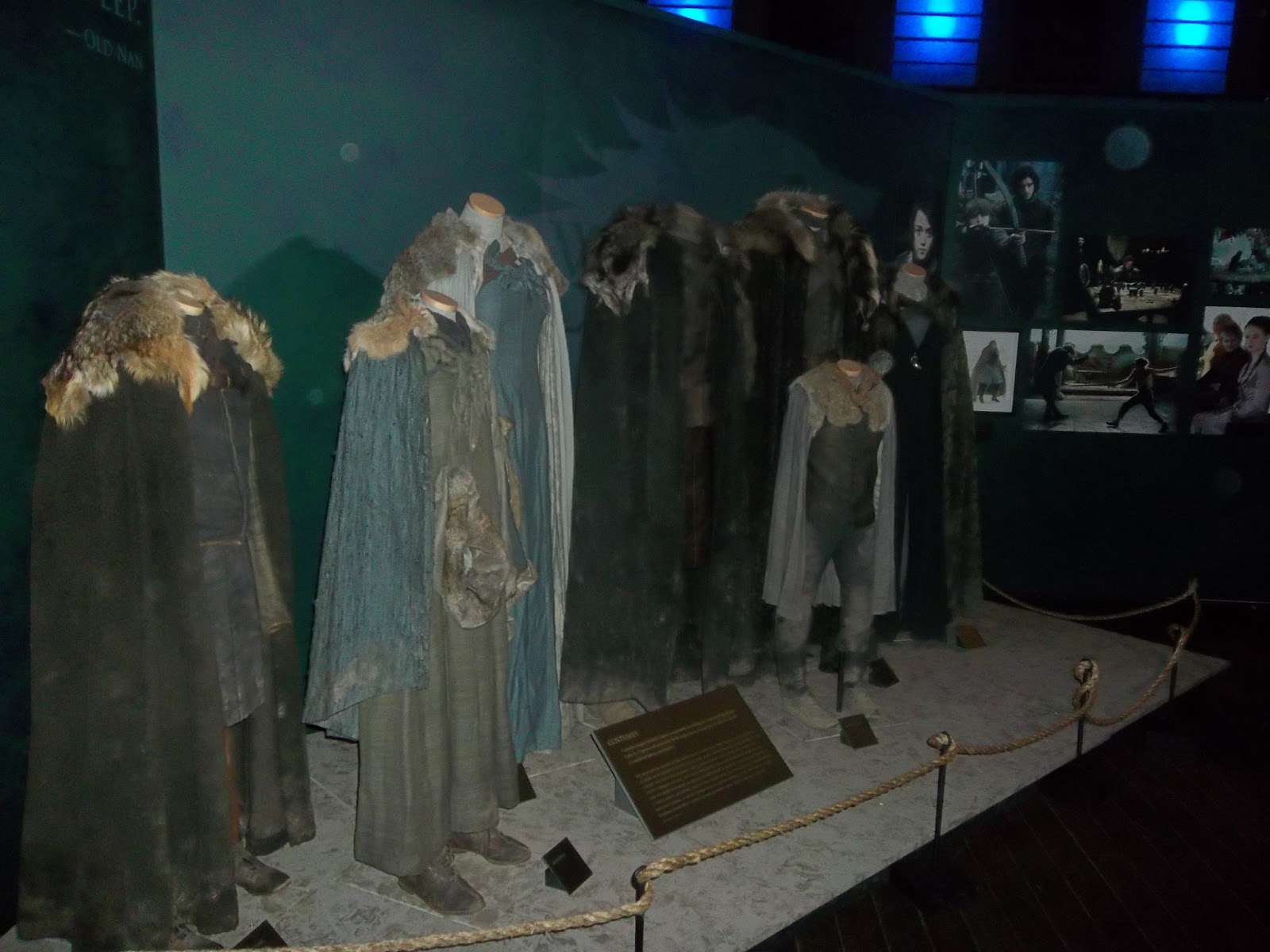 The Stark family's season one costumes, arranged as they were in the Royal Greeting scene way back in the early moments of season one. Credit to the costume department, these outfits look heavy. They look as though they would be warm to wear, which they may well be if they were filming on location. Later, the North of the Wall costumes exhibit the same impression, thought obviously as a part of function, considering they were filming in Iceland. 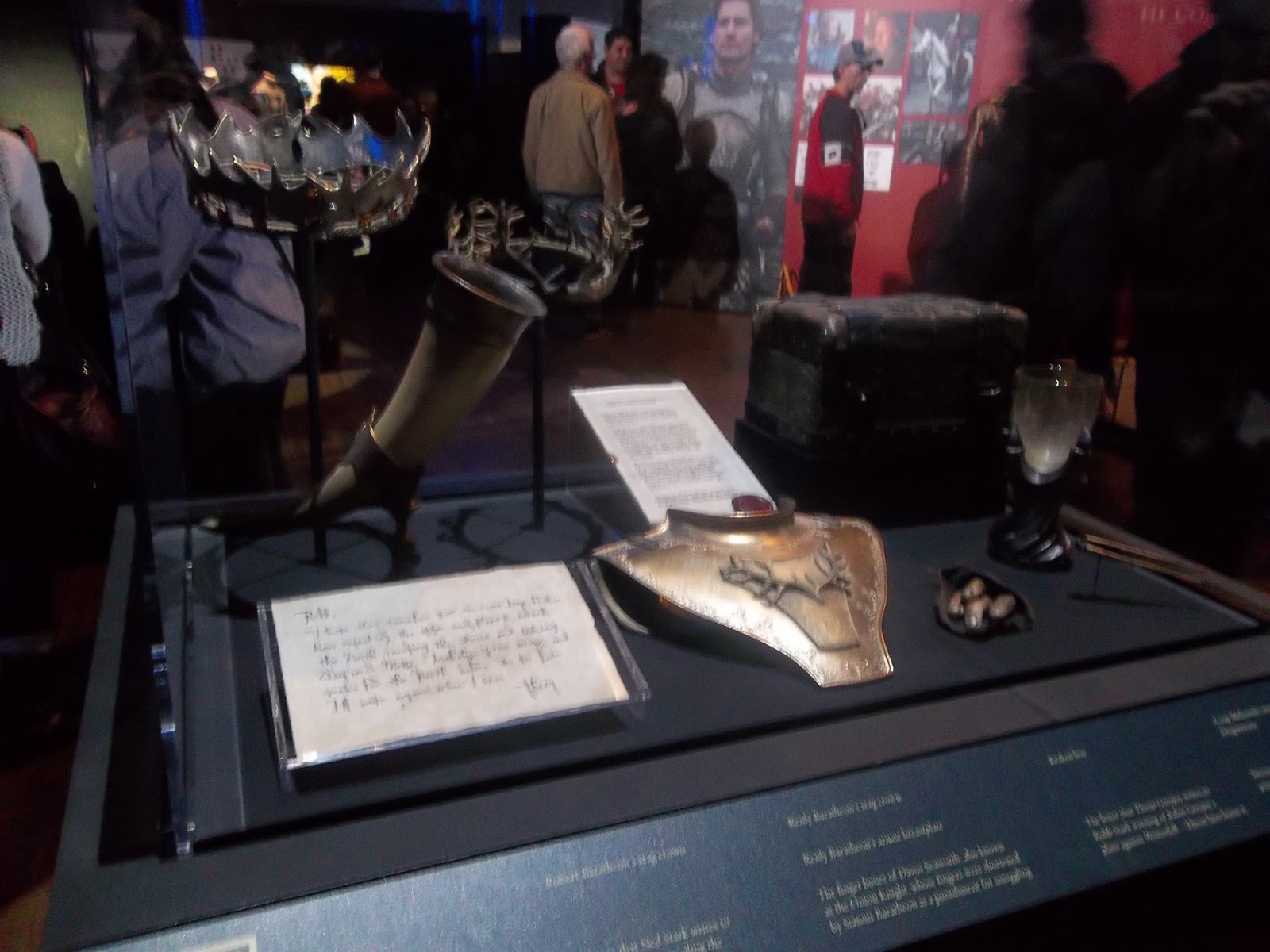 Last year the Baratheon's were largely the focus of the exhibit, considering that it was Renly and Stannis' battle for the crown that was the focus of the year. This year, the largely defunct family was given a intermediary display, showing off Robert's and Renly's crowns, Robert's drinking horn, Stannis' glass and a Baratheon breastplate. Also here were Ned's letter to Stannis after Robert's death, Theon's letter to Rob after his father's betrayal, and Davos' bag of fingers (which, despite use never seeing them, had finger ends in them). 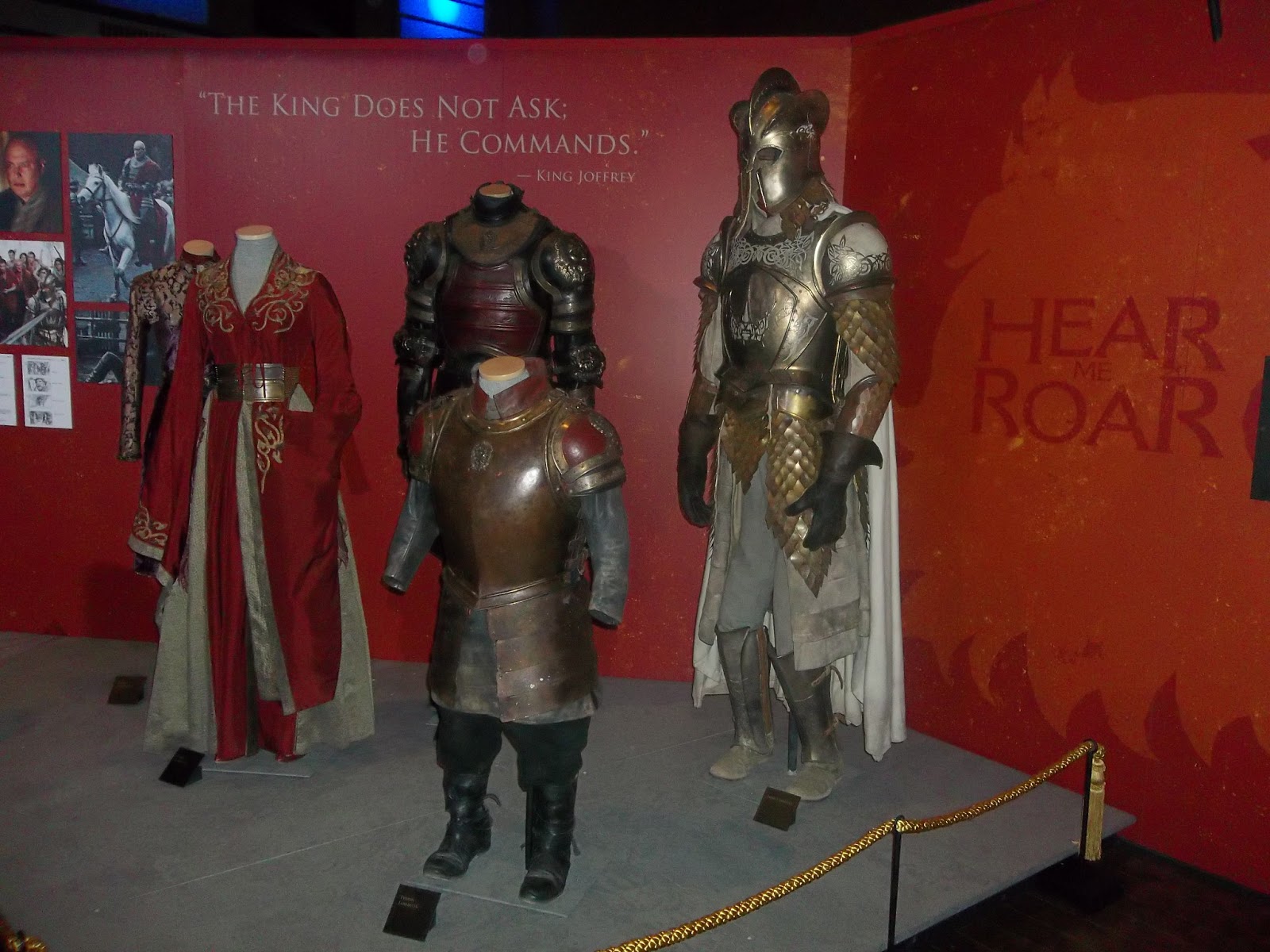 The Lannisters had the second area, featuring the armour of the Hound, the Mountain, and Tyrion, as well as Cersei's dress and another dress I didn't recognise (it is hidden behind Cersei in this photo). After reading the ID card, I had an unexpected laugh when I learned it was Joffery's robes. They were very effeminate, more so then Renly's purposefully feminised armour last year. The Mountain is... very large. I get that he's meant to be big, but even the Hound seemed reasonably sized. But the Mountain is simply big. 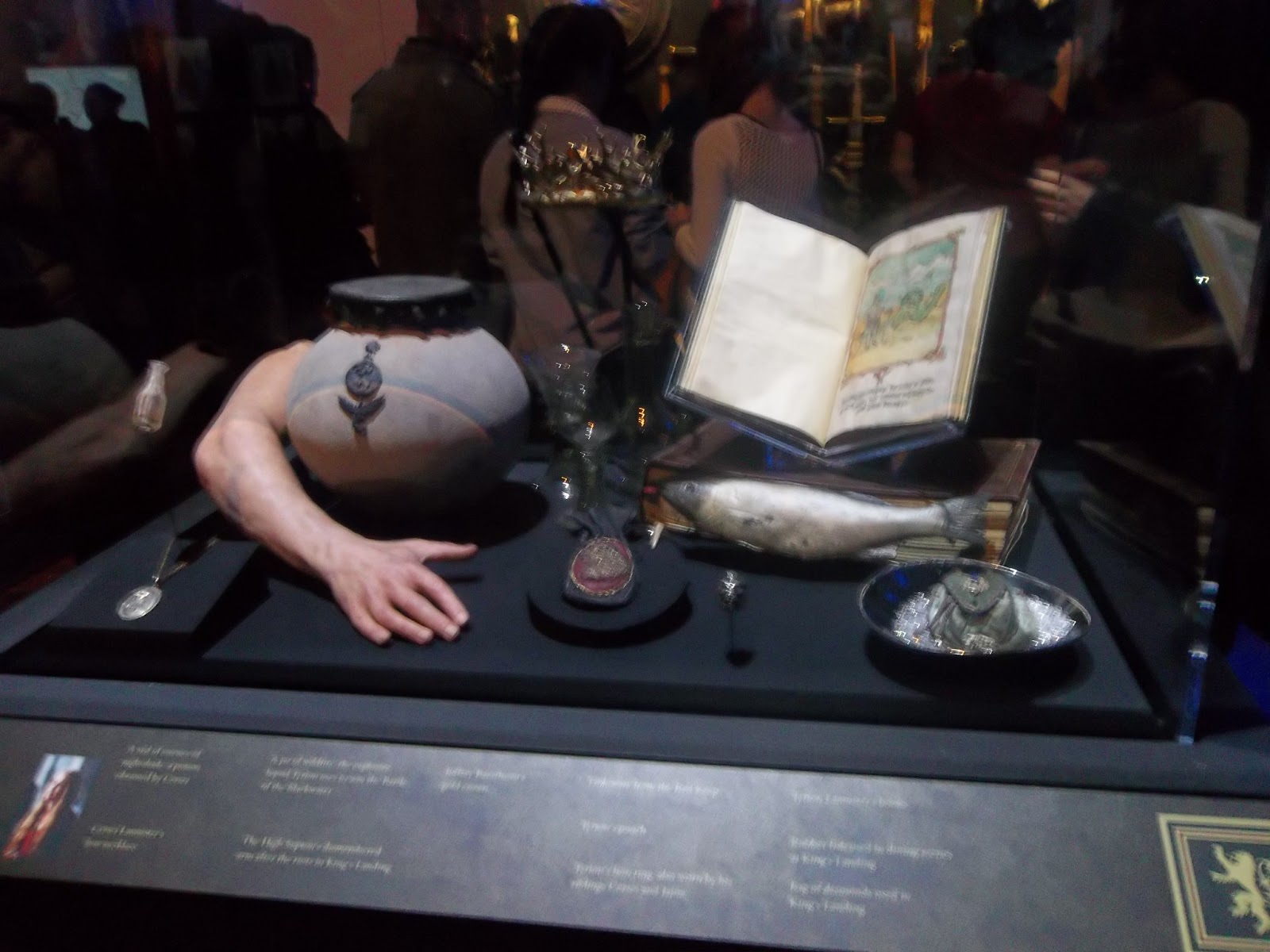 The Lannister display included Joffery's crown, a pile of Tyrion's books, a pot of Wildfire, and the dismembered arm of the High Septon, torn out during the riot. I should mention that at this point in the exhibit, all the presented materials were from the last two seasons. Last year, the draw was the ability to get a sneak peak at what was coming up, attempting to build the anticipation of the coming year off the (somewhat surprising) success of the first year. Now, the popularity and success of the show is well established, and doesn't require that much of a gimmick to get people through the doors. There was still a few season 3 items, but they were in the minority. 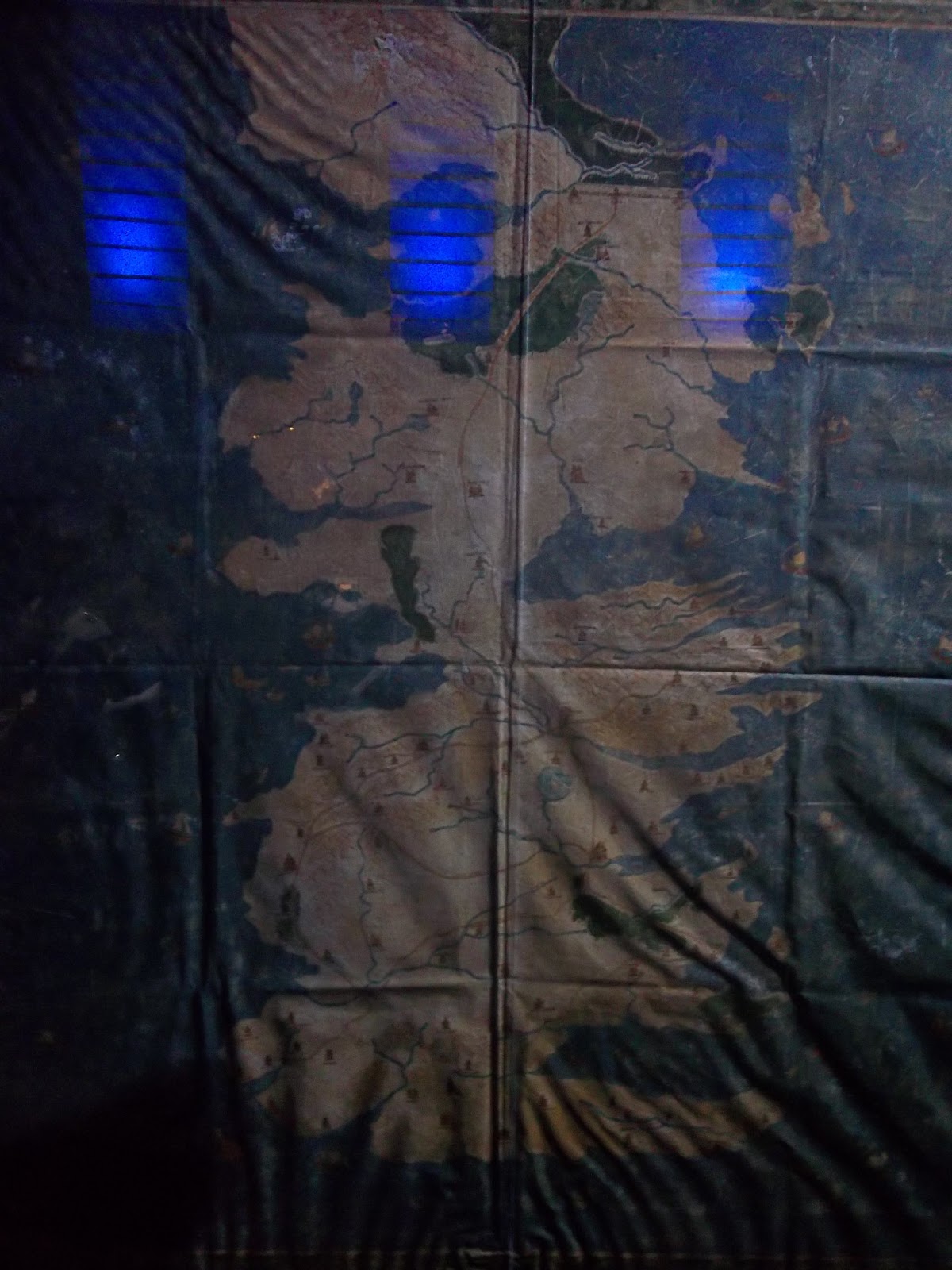 I should mention at this point that the entire exhibit was very dark. It was dark, and basked in an eerie black light (as is visible in this reflective display case). The Lightbox is an open white space, well lit and very clear. I thought that while the darkness added a slight atmosphere, I would have much rather seen things clearly rather then dankly.

This massive map was very impressive. Ten feet tall, it done as a tapestry, with hand inked locations, some of which were incorrectly placed, to add to the feel of a real, in-world creation, complete with incorrect information and scale. 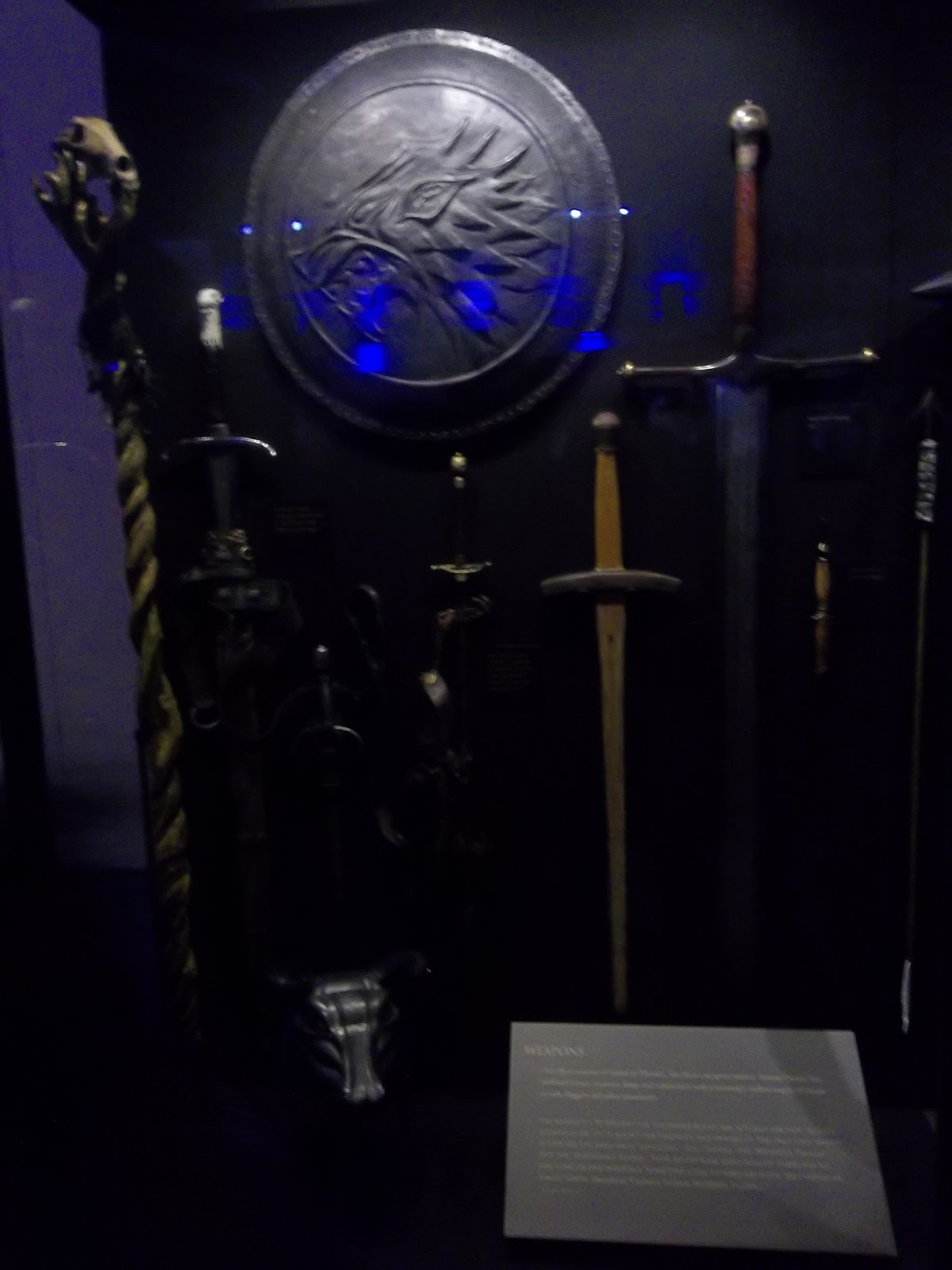 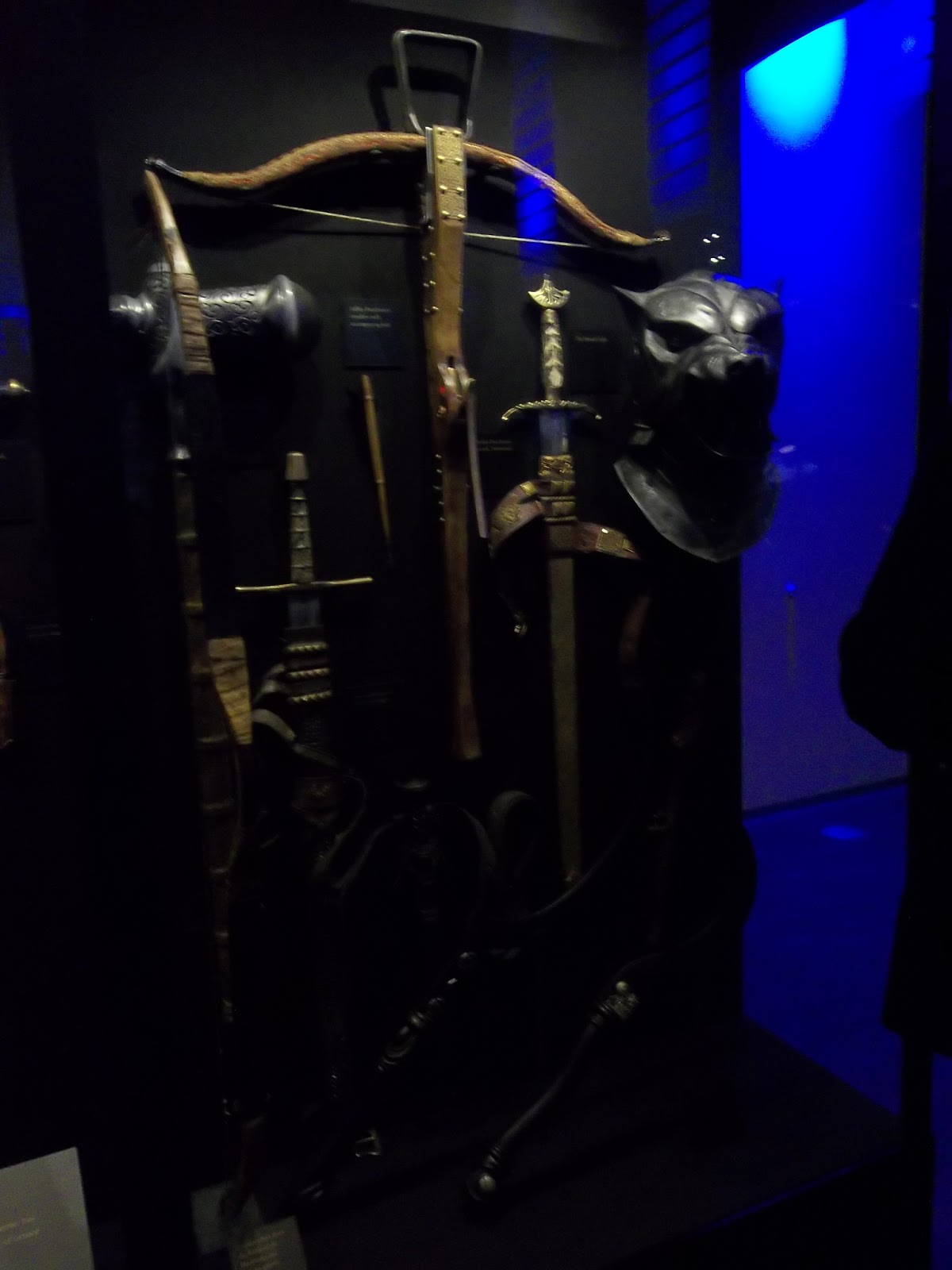 The dark was at it's worst in the weaponry cabinet, which contained pretty much every major weapon featured on the show to date. Ice, Longclaw and Hearteater were the Valyrian blades on display (which according to the additional materials, are the only weapons made of real steel, the rest made from aerospace aluminium). Gendry's bull helmet, and the Hound's helm were there, alongside various dangers, short swords (including Needle), arrows, and crossbow bolts. 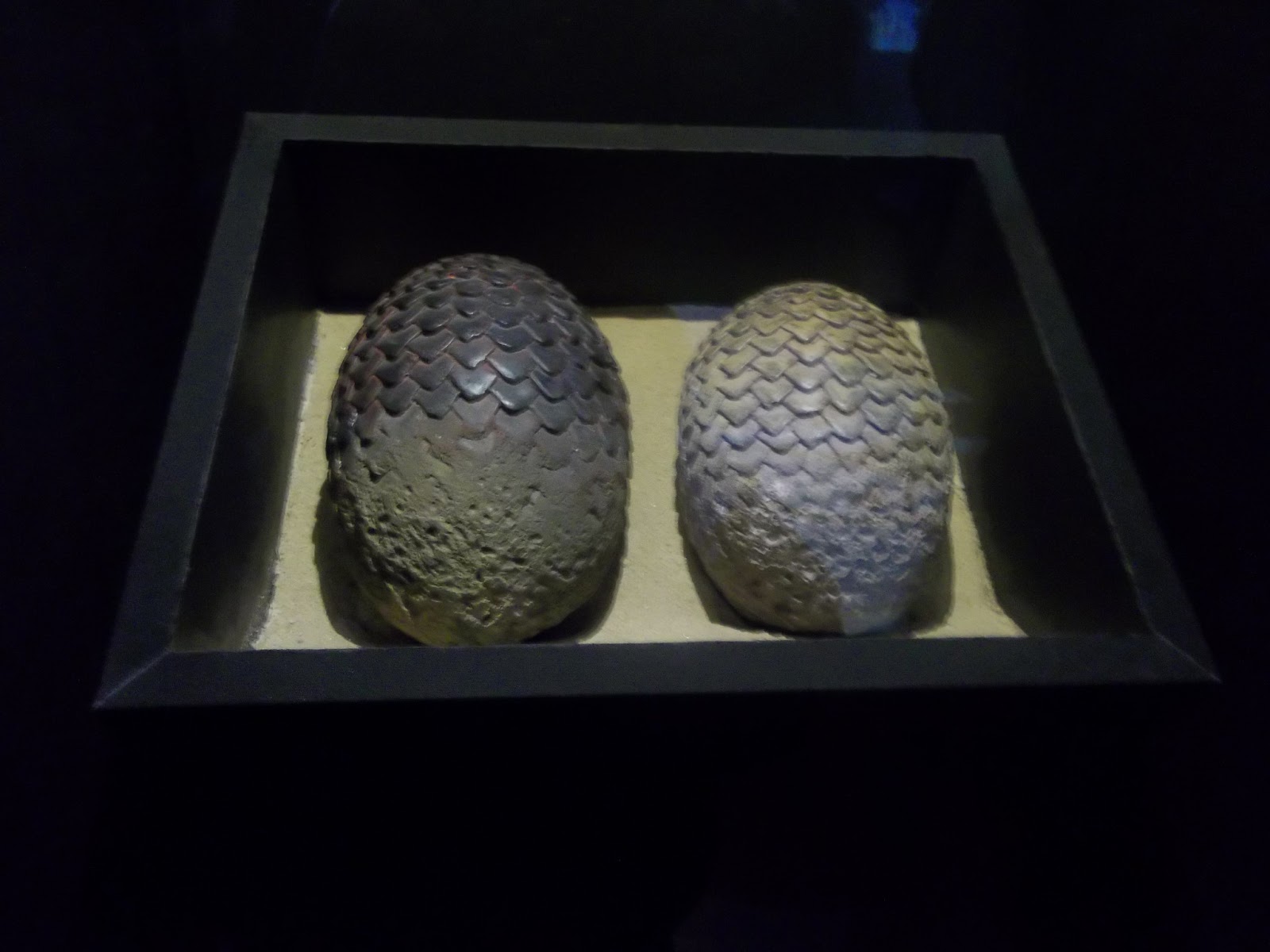 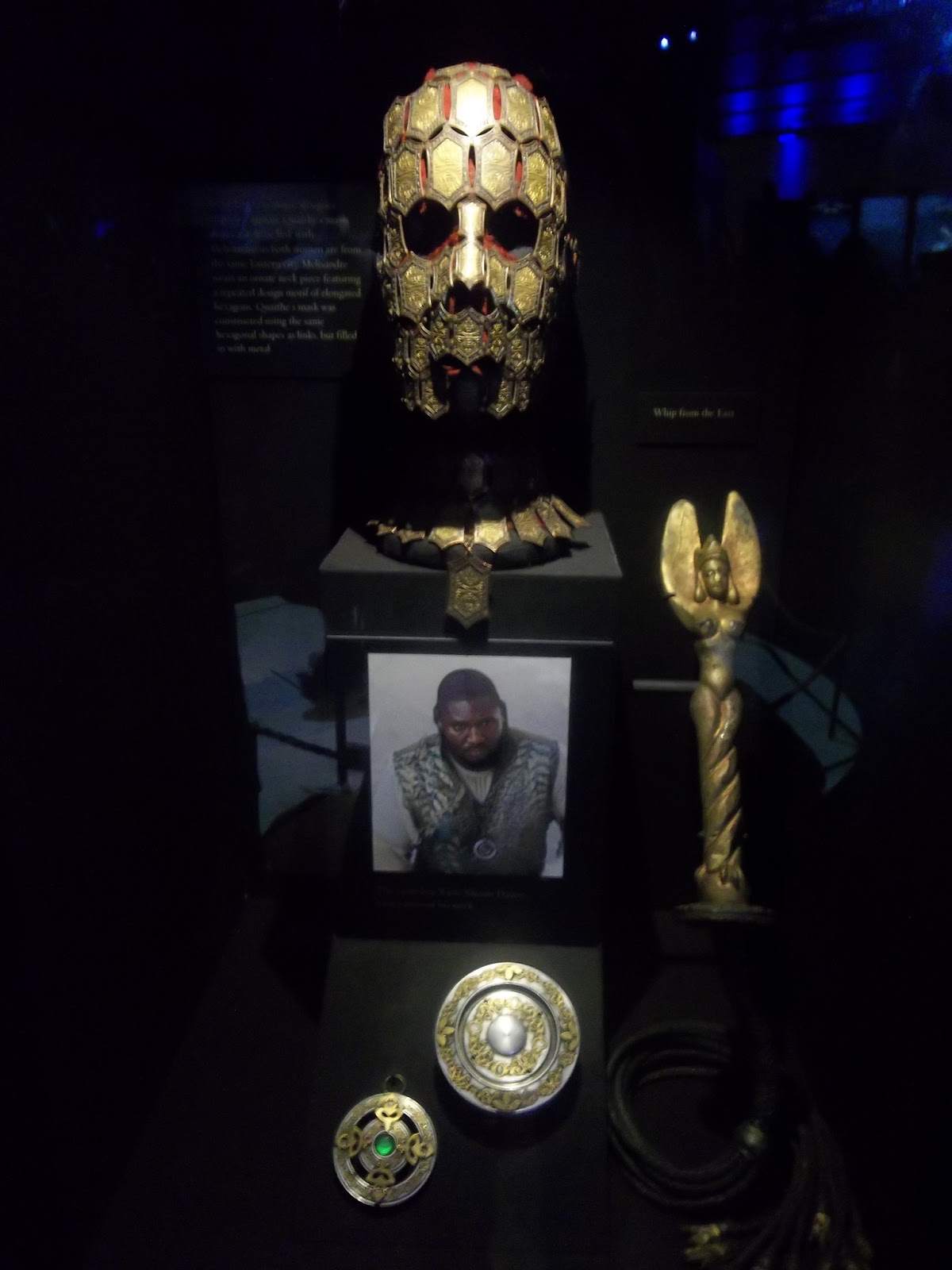 The Dany section was mostly focused on her dragons, the only items on display that were otherwise were Qarthian gold, including the key to the vault, and Quaithe's mask. Two of the original egg props were displayed, the third having been given to George R.R. Martin as a wedding present by the producers. 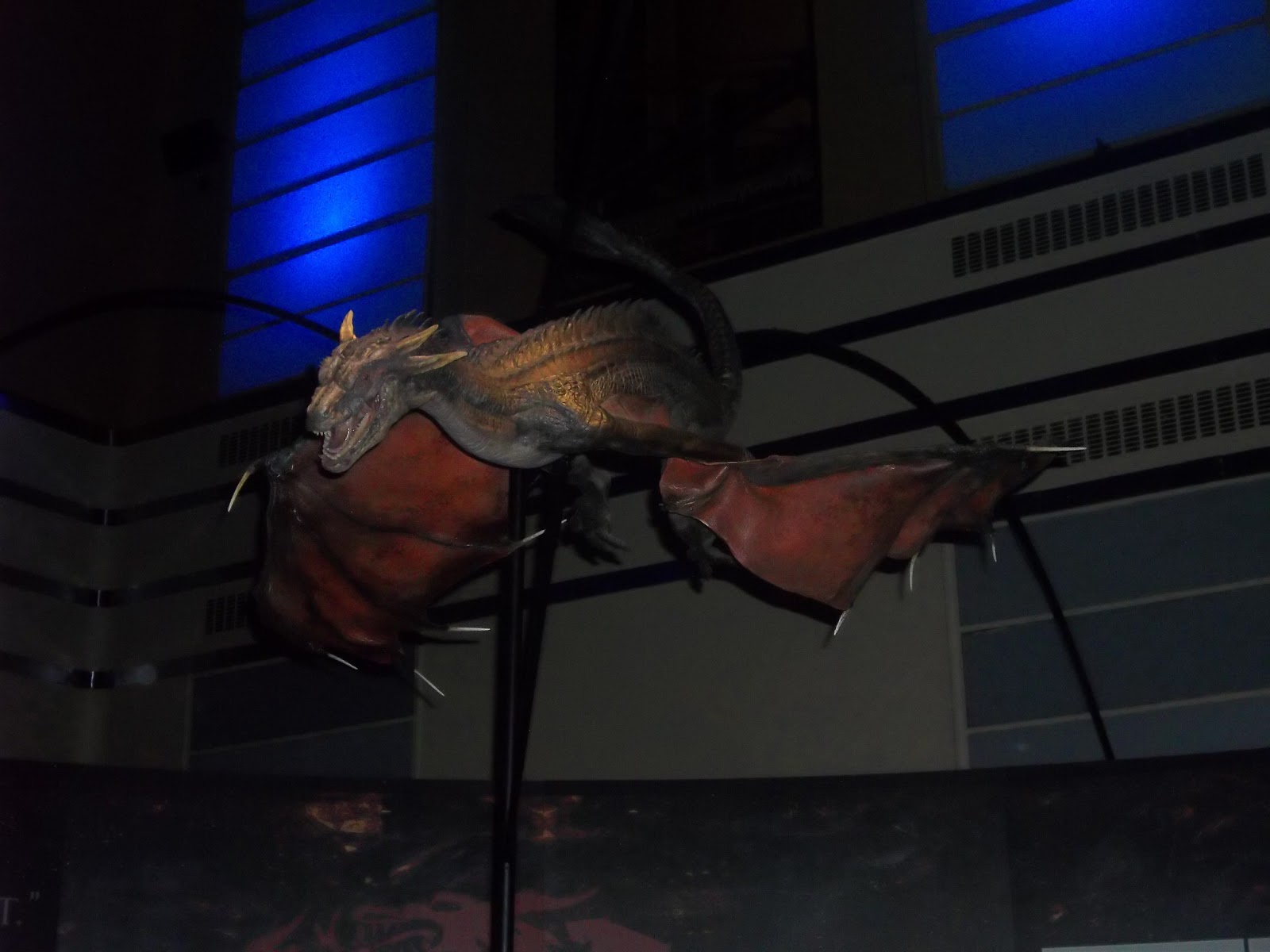 The primary focus was, as I said, on the dragons. The hand sized Drogon maquette from last year was shown, but the centrepiece was the third season glimpse at the animal, in flight, suspended from the ceiling. About the size of a dog, the detail on what is little more then a reference piece, was impeccable. 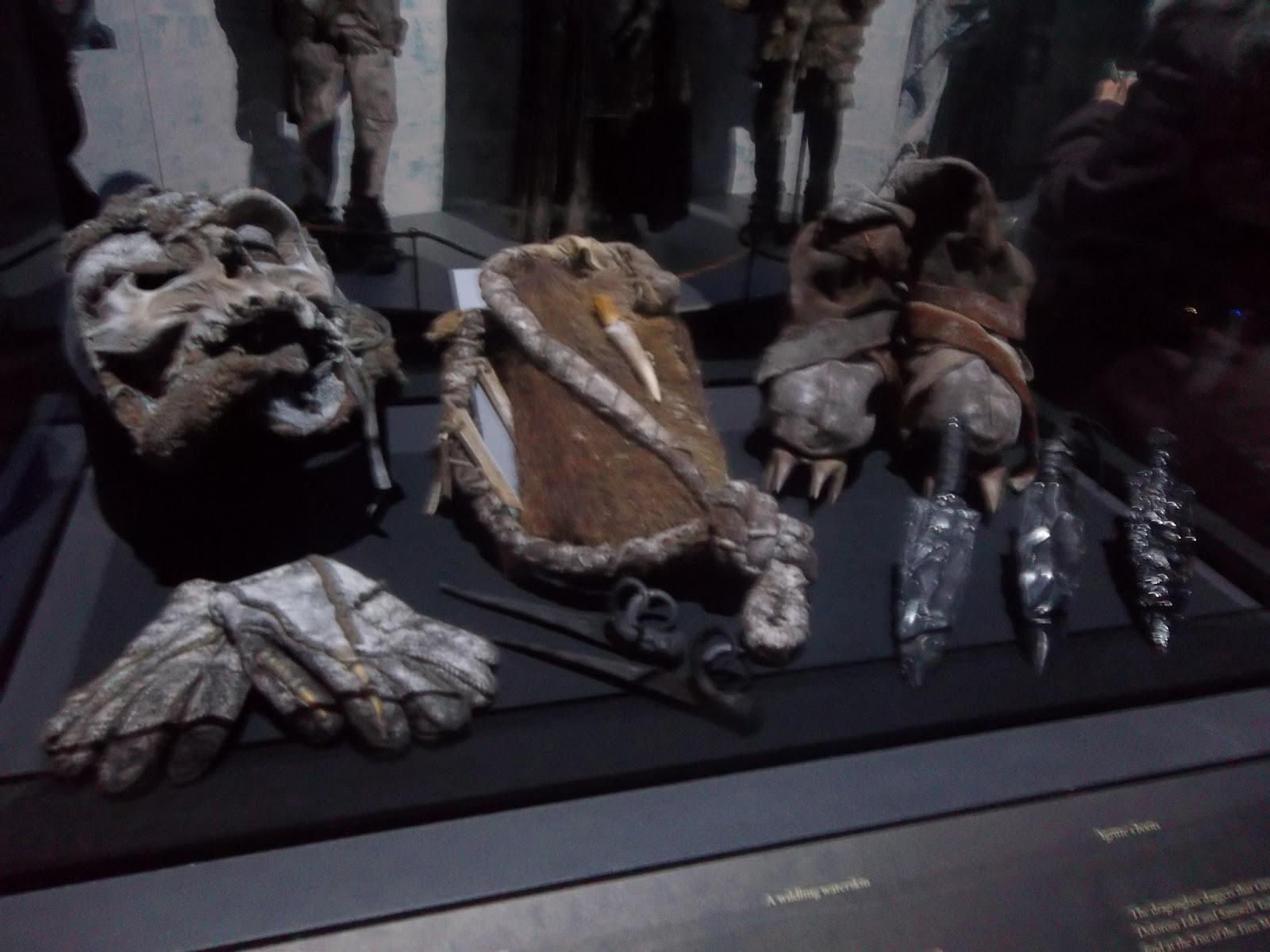 Rattleshirt's mask and various Wall climbing tools were the tightest collection of season three materials, and to be honest were the least interesting to me. It's mostly just a collection of leather covered in fur, lacking any of the intricate and refined detail of the gold and the books of the south. I'll also fully admit that the North-of-the-Wall stuff is my second least favourite storyline in the series, and will be thankful when they return to the Wall at some point this season. 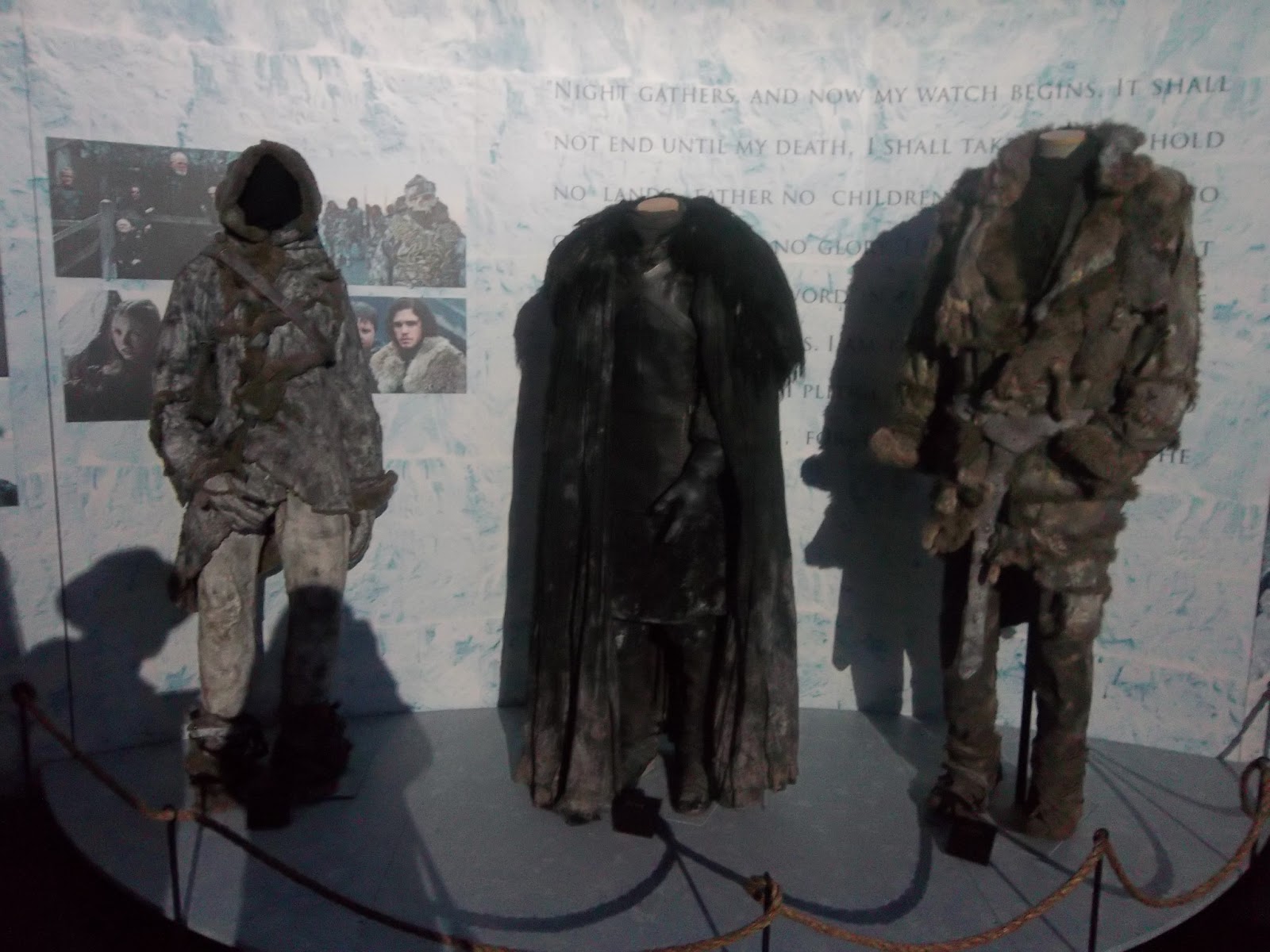 Ygritte, Jon's Black Brothers cloak, and Mance Rayder's collection of squirrel pelts were the last costumes on display. Rayder's costume looks like he made it himself on his way, by grabbing small mammals and tying them to his limbs. It is certainly unique among the other Northern costumes, and looks as far from Kingly as you can get. Joffery's dress had more royal pomp to it. Which is exactly the point. 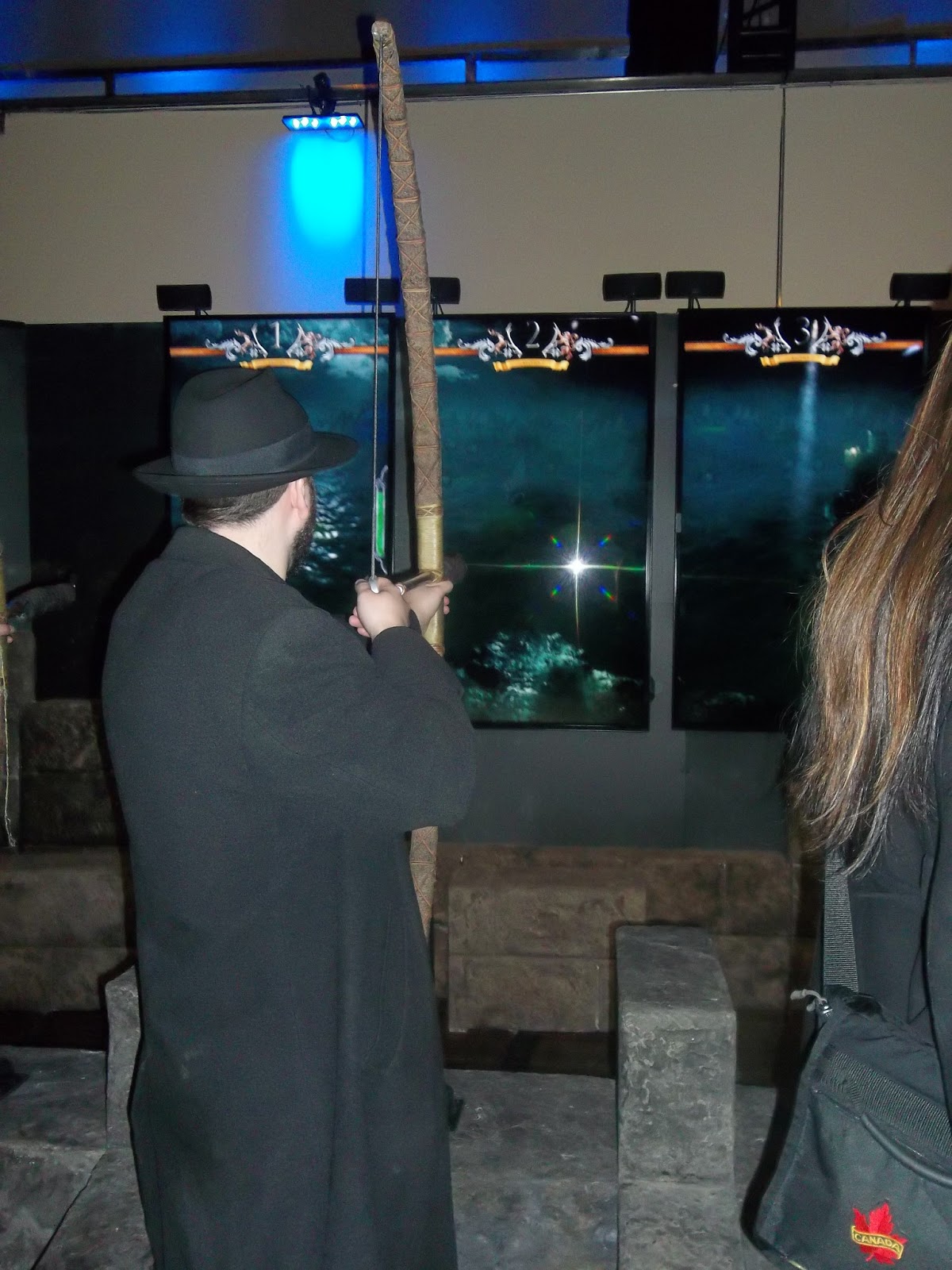 The exhibit ended in two interactive features. The last was the opportunity to sit and have your photo taken on the Iron Throne. Since this was available last time, and I already had done so, I bypassed this feature, thus saving myself at least half an hour of queueing. The penultimate feature though was new. An interactive game, allowing you to play the role of Bronn in the Battle of Blackwater. The player takes control of one of three bow and arrow interfaces, and are given three flaming arrows. A fleet of ships sitting in the bay sit in puddles of Wildfire, which the player must ignite. It is with no ego that I report all three of my arrows found their targets,destroying Stannis' fleet and awarding me the top score and the praise "The Iron Throne Is Yours" (my photographer, who thought the objective was to hit the ships claimed "You'd Make A Good Bannerman", while the third in our line up seemed to manage to miss the water entirely, earning "Even Cowards Can Serve The Wall") 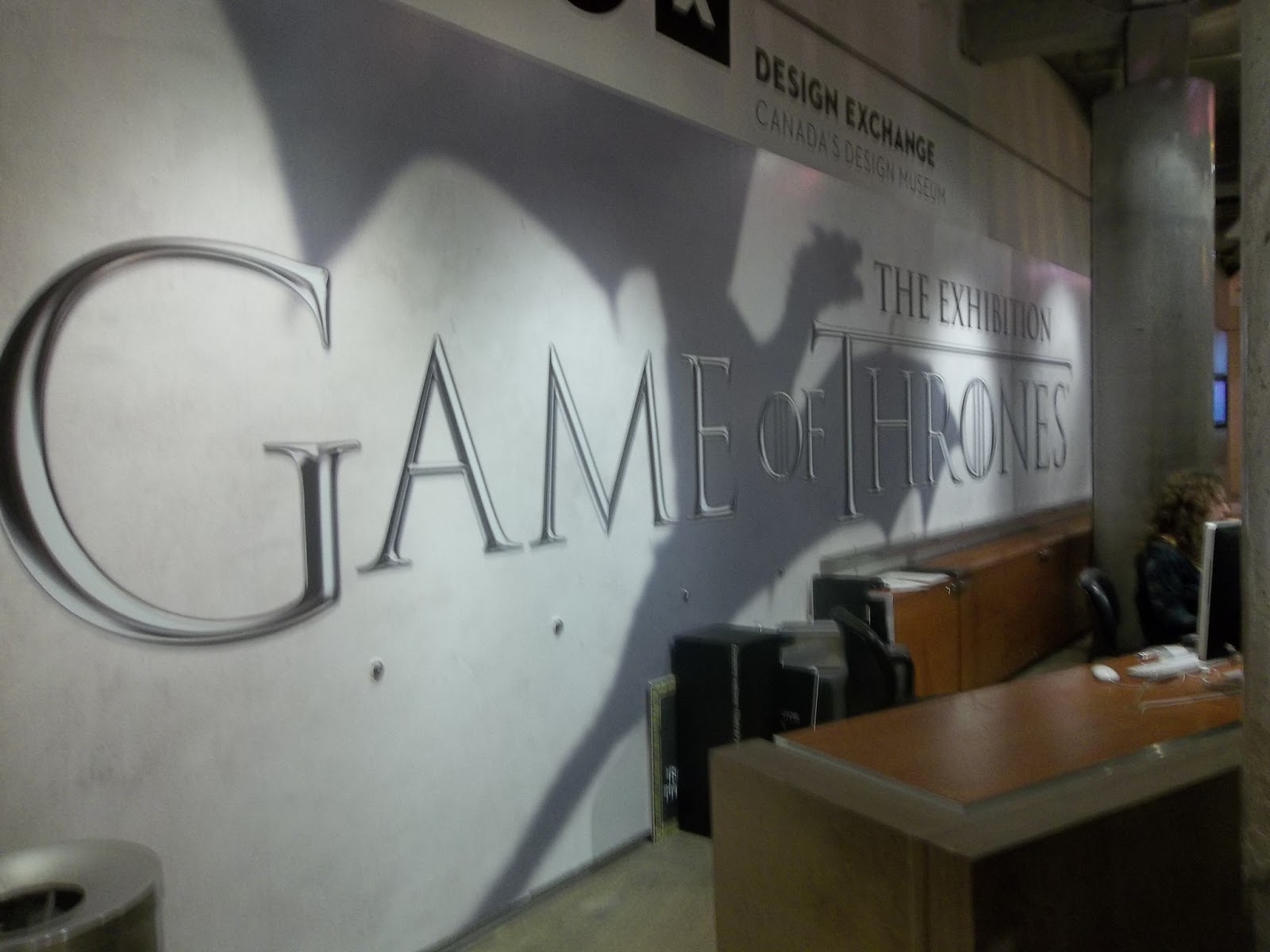 Yet again, HBO has put on a great show. For fans of the show, it is exciting and fascinating to get this close to any elements from that world. My hope is that HBO continues this trend, and that they continue to build on the exhibit each year, adding more and more props and costumes, taking it to more and more cities. So long as they remember to kick it off in Toronto.
Posted by MR. Clark at 10:30