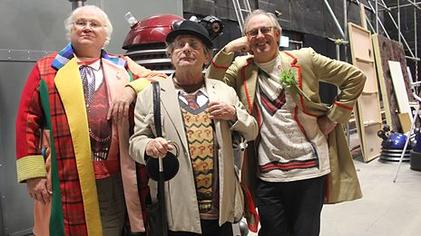 The Doctor Who 50th anniversary was a time of many surprises, but perhaps the most surprising was that the best of all the celebrations was Peter Davison's The Five(ish) Doctors Reboot. The comedic attack on the anniversary by the three elder Doctors (Davison, Baker the second, and McCoy) was the loving punch to the arm that the proper special needed. A bit of good natured being brought back down to Earth. Disappointingly, the special, which was released onto the internet to widespread acclaim, never received a release on DVD along with all the other anniversary material.

That appears to be changing. Colin Baker, speaking recently at a convention, announced that the Five(ish) film will accompany a Matt Smith themed DVD set that the BBC is currently putting together. Whether Baker's words hold any merit is yet to be seen, but I for one am hopeful that this turns out to be more than just a rumour. In a perfect world, the BBC would release Five(ish) along with Moffat's Curse of Fatal Death in a special double set, reserved for those celebrations of the long running series that place the tongue firmly in the cheek.

But that appears to be too much to ask.