If you've happened to glimpse at the actual content of this site whilst using it to discretely hide the Korean pornography you are viewing at a public library computer terminal, as I assume most of you are, then you are likely familiar with my fondness for the board game Clue. Well, more than a fondness, really. It's an affection. Well, perhaps more of an obsession. Fine, an insatiable desire. I've come to terms with that. I am similarly passionate about Joss Whedon's magnificent, and as far as I'm concerned, complete and not-needing-of-further-elaboration, series Firefly. So, when I heard the rumour that the two were coming together, my heart did a thing that my doctor said we should keep an eye on.

But I've been burned before with licensed versions of my beloved Cluedo. Deep, stinging burns that make me hesitant to invest my affections. Happily, Clue Firefly exceeds my expectations of what a licensed property can be. The work that has went into this essentially novelty item is that what some might have come to expect from Browncoats. And I assure you, it was Browncoats behind this game. The attention to detail, the obvious love that went into construction every aspect of this game, adapting the classic Clue formula just perfectly to fit the Firefly framework, is both staggering and comforting.

Or maybe USAopoly was just afraid what the combined forces of cheesed off Firefly fans might do to their offices if the product sucked. Which, I'm fine with. Fear is an excellent motivator, and whatever the reason, I got a hell of a game out of it, so I'm happy.

Hit the jump for the review 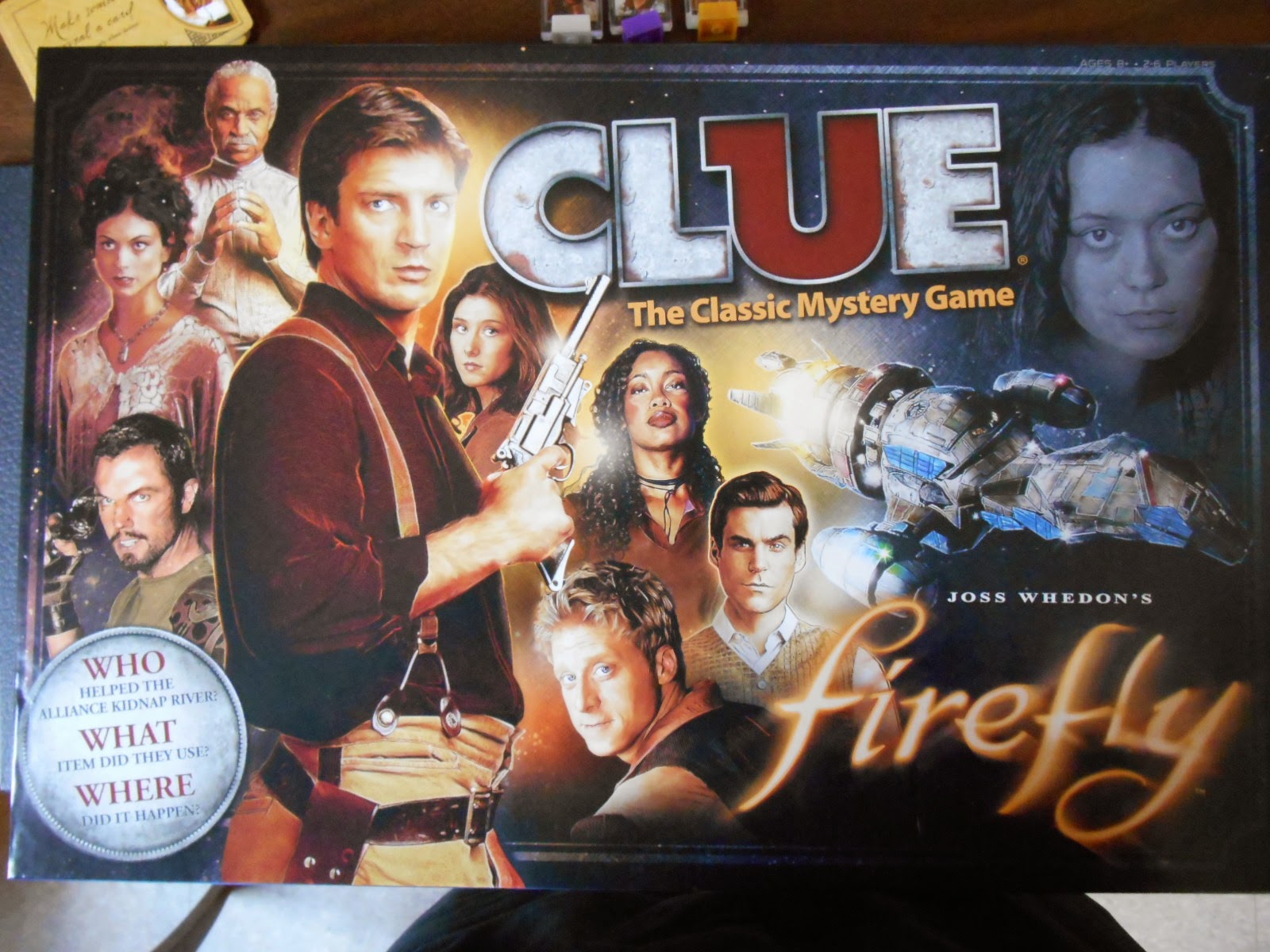 Before we do or say anything else, I need to mention the art work. It is fantastic. All based on well circulated promotional materials from the series, or screen shots from the show. Occasionally, on the cards, it hints a little too heavily of those screen grabs having just had a heavy filter applied to them in Photoshop. But on the whole, this game looks gorgeous.  And it starts with that box art, which would make anyone stop and take a look, if they glimpsed it on the shelf as they were walking by. It's complete without being crowded or complex. For fans of the series, it's reverential and enforces a gleeful nostalgic sensation. It helps that the depictions of the characters actually look like the actors who depicted them. The eyes aren't too far apart, the chins aren't a touch too wide. Hence the sensation that this artistic interpretation is artificially created, but I honestly don't care if it was. The fact that they might have went to the trouble of making it look like art work instead of just copy and pasting old stills onto the box wins them bonus points. 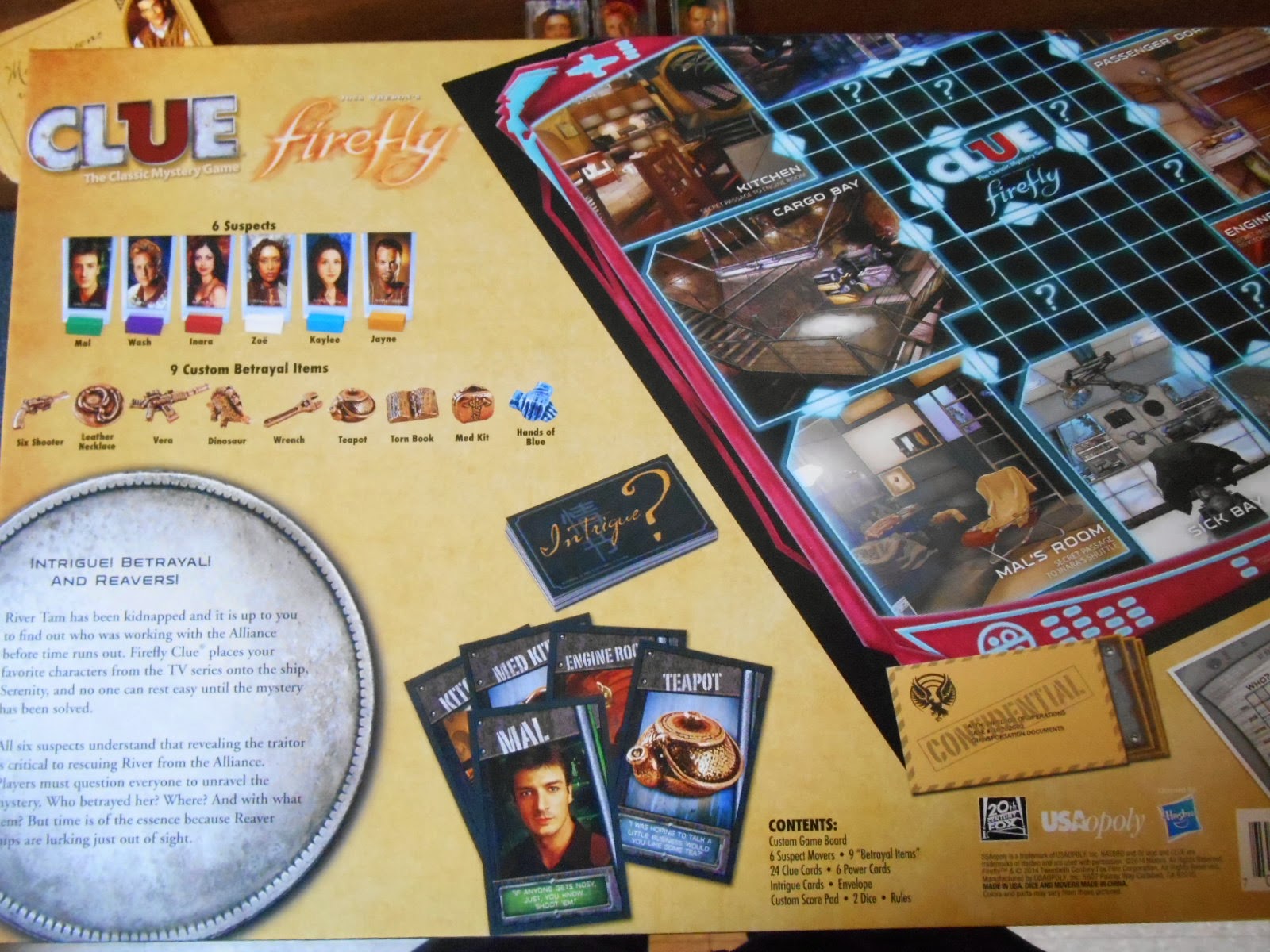 The game follows the classic Clue structure, of a character having committed a crime in a location with a weapon (part of the reason why Clue is so adaptable is the latitude this format allows). In this case, The Alliance has captured River Tam because one of Serenity's crew has betrayed the rest of the,, and you have to figure out who, in which room on-board the ship, and with what item of iconic status from the series. Part of the success of a licence's adaptation to the Clue format is how much force is necessary to make it fit within the Who-What-Where scenario, and Firefly fits seamlessly because this literal scenario was an ongoing theme on the show (in the game's case though, the answer won't always be Jayne). 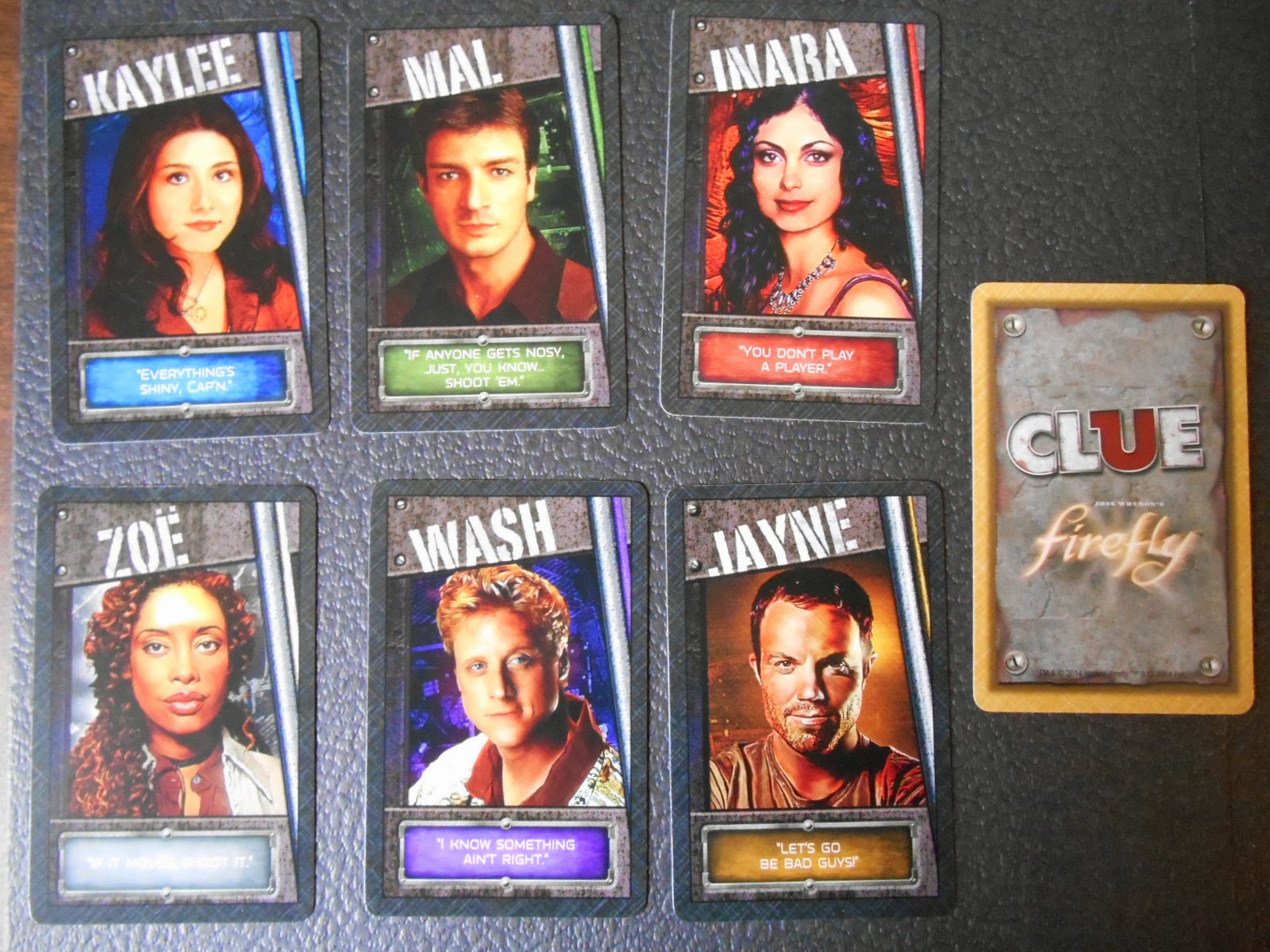 The suspects are Mal, Zoe, Wash, Inara, Kaylee and Jayne. And again, you have to assume that the reason neither Book or Simon are suspects are because those two character above any of the others would never have considered selling River out. True, it's equally unlikely that Kaylee might, but they needed six suspects and Simon and Book would make far less sense in the context of the material. You have to admire the manufacturer for adhering to series consistency within the canon of a board game. 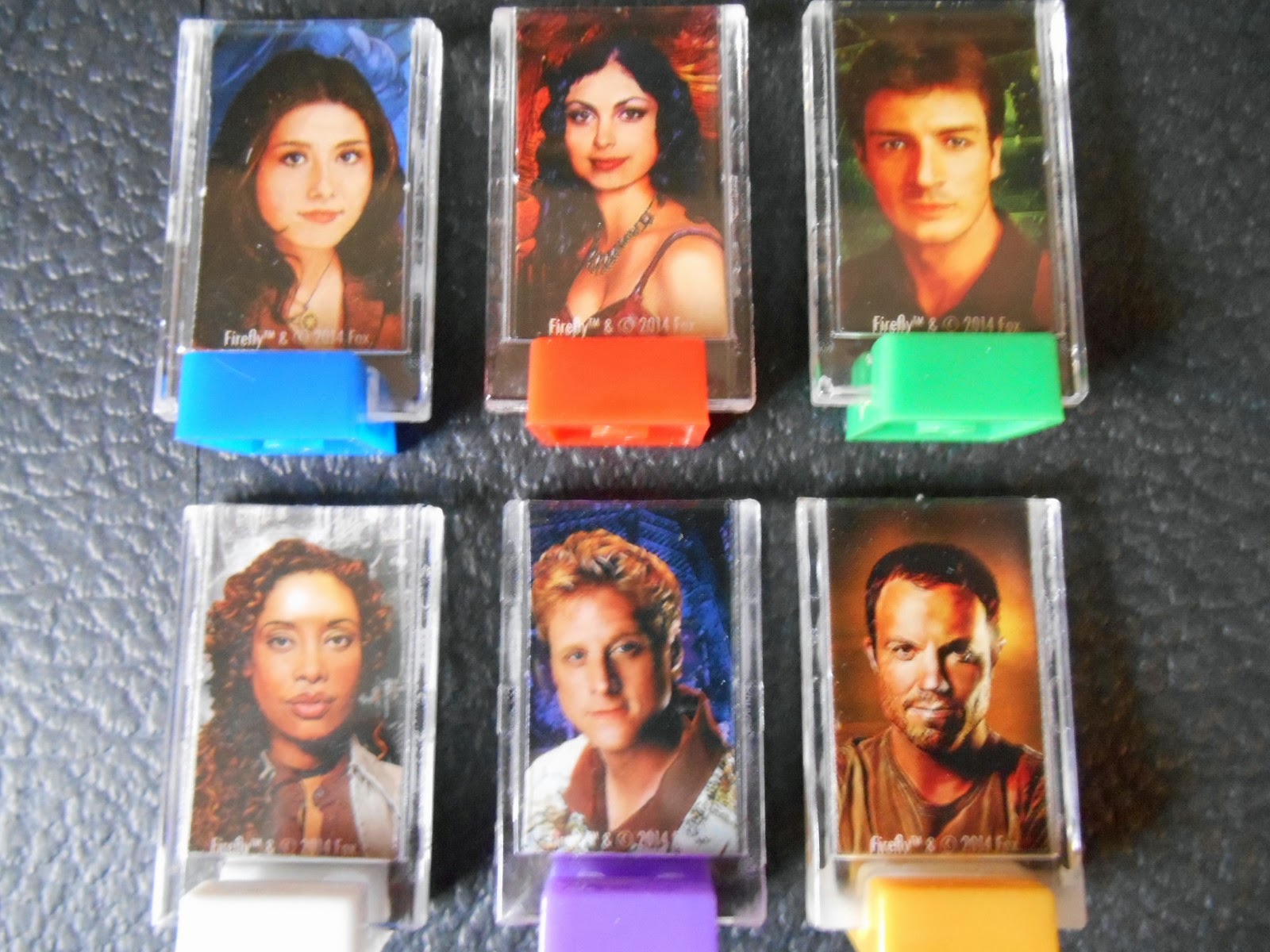 The game pieces are cardboard punch-outs in clear plastic holders with colour bases, though in the sharpest deviation from the original format, these colours are almost completely meaningless, thanks to a change in the game board (and I'll get to that). These are my preferred type of pieces for licensed games, if only because part of the reason you buy a licensed game is to see your favoured characters as part of the play. Anonymous coloured pieces don't have the same feel, so I'm very glad to see faces looking back up at me form the board. 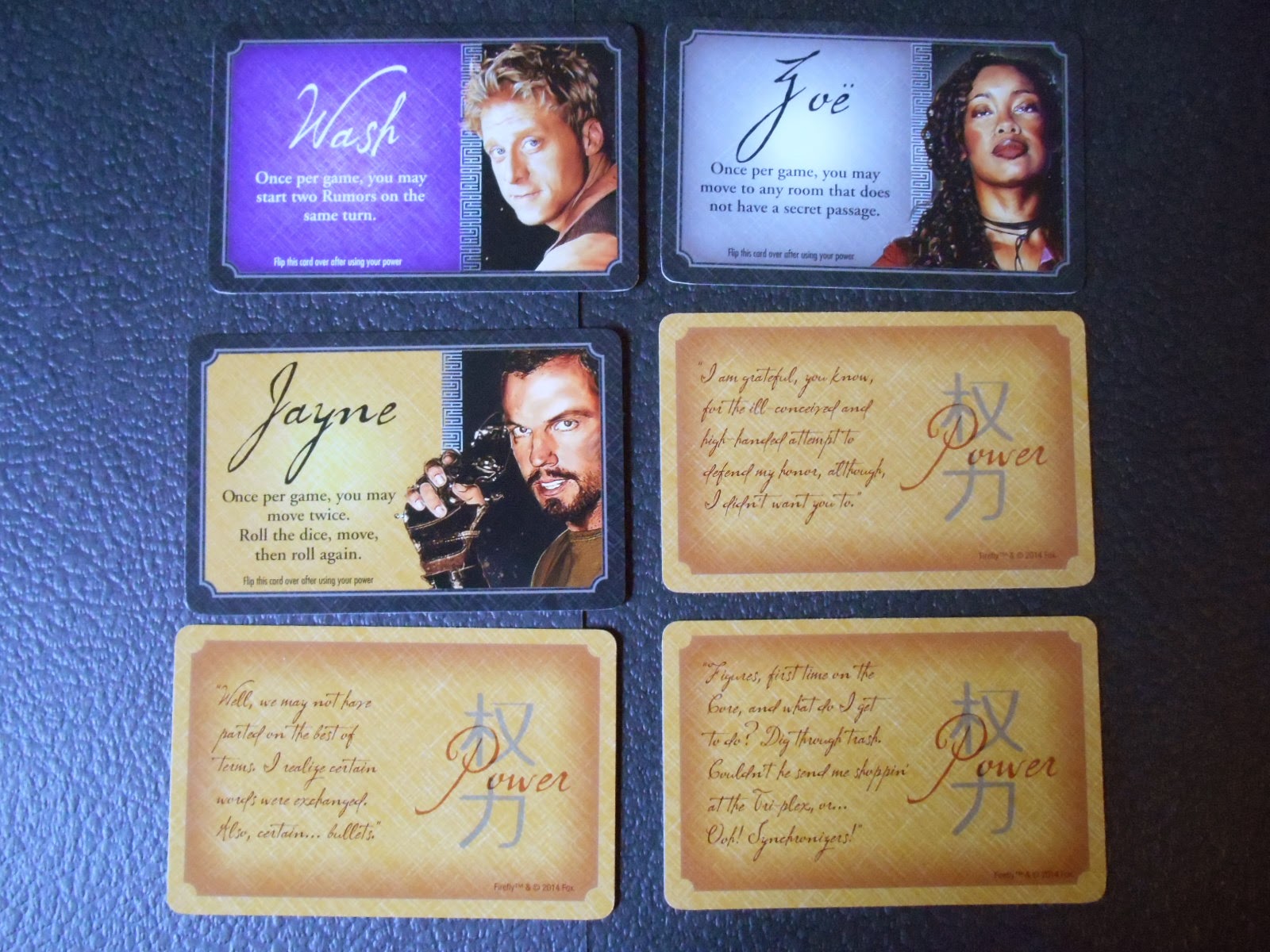 This edition is based off of the Discover The Secrets variation, and as such includes Intrigue and Power Cards, as well as nine weapons instead of six. The power cards accompany the character you've chosen to play, and include a one-time power, such as being able to take a second turn or sneaking a peak at another player's cards. Each of these cards, as well as most of the rest of the game, comes with a character quote. These are cherry picked and actually shy away (mostly) from using the best known of the series' lines, and use lines that make sense in the context of the game. It can't avoid using "Big Damn Heroes" or "curse your sudden but inevitable betrayal," but it also makes use of some more meaningful bits of dialogue, like "faith fixes you."

Another indicator of successful adaptation to a property is the quality of the weapons. The choice of items have been culled from the depths of the material. My personal favourite Clue weapon is the George Foreman Grill from the Office Clue. These weapons are no less impressive, and eclectic. Because the show was low on instantly recognizable objects, they've instead followed the basic formula that each of the weapons has some significance to a pivotal moment for each character on the show. Wash's toy stegosaurus, Jayne's very favourite weapon, Book's torn Bible, Mal's gun. Part of me feels like Kaylee's parasol would have been a better choice then a nondescript wrench, and it speaks somewhat to Simon's blandness as a character that the best they could come up for him was a med-kit (in reality, River would be Simon's defining item). 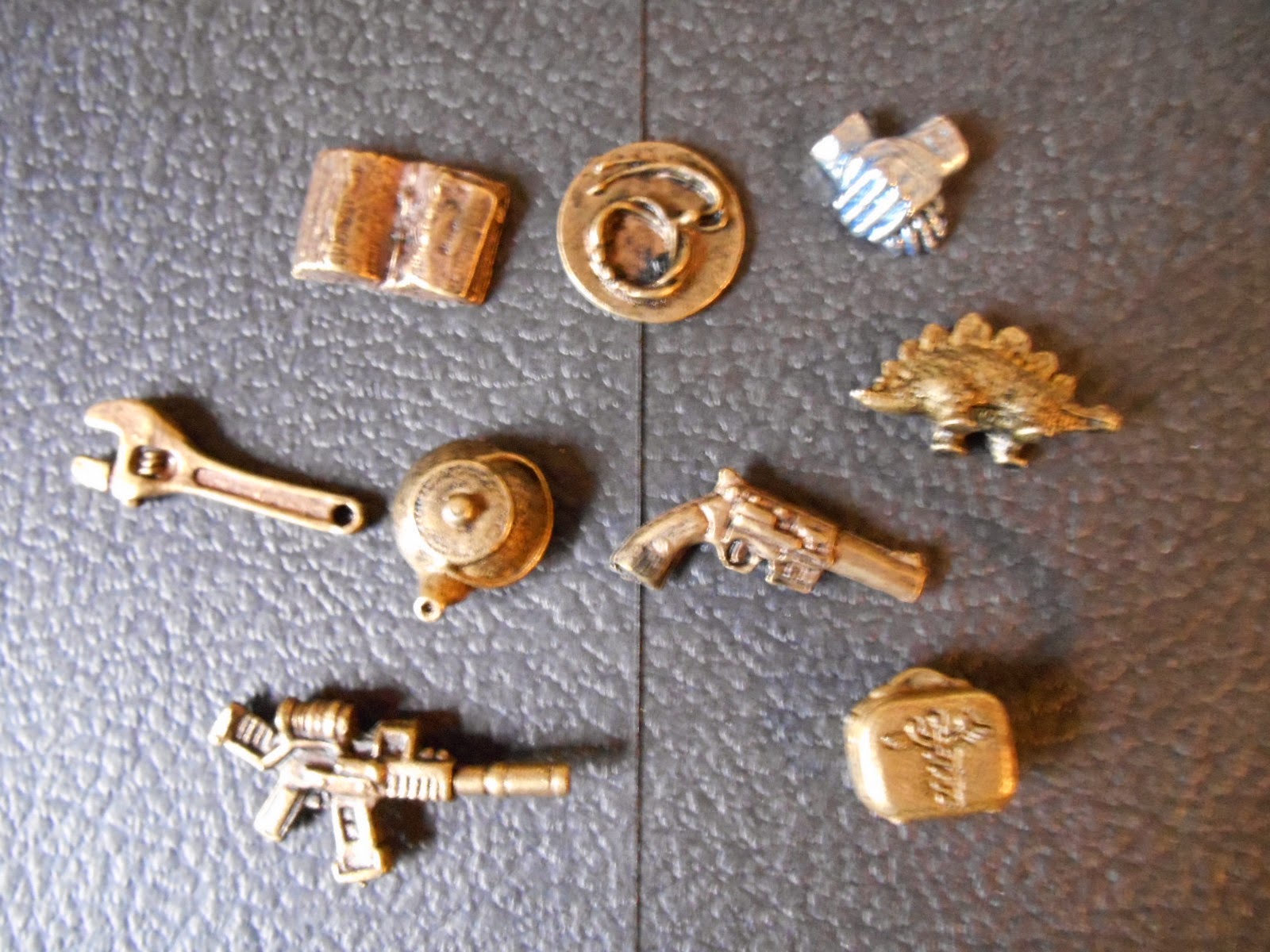 Each weapon is die cast metal, painted gold, except for the Hands of Blue, which are, as you might have already guessed, was blue. The Vera piece has a slight curve to it, and the necklace (the rope stand-in) is embossed on a flat plate, when it could have been a plastic piece that laid on it's own, and wouldn't have seemed odd (Clue fans have come to expect the rope to be the one out of place piece in the set). These are solid, heavy pieces that won't be prone to breaking. 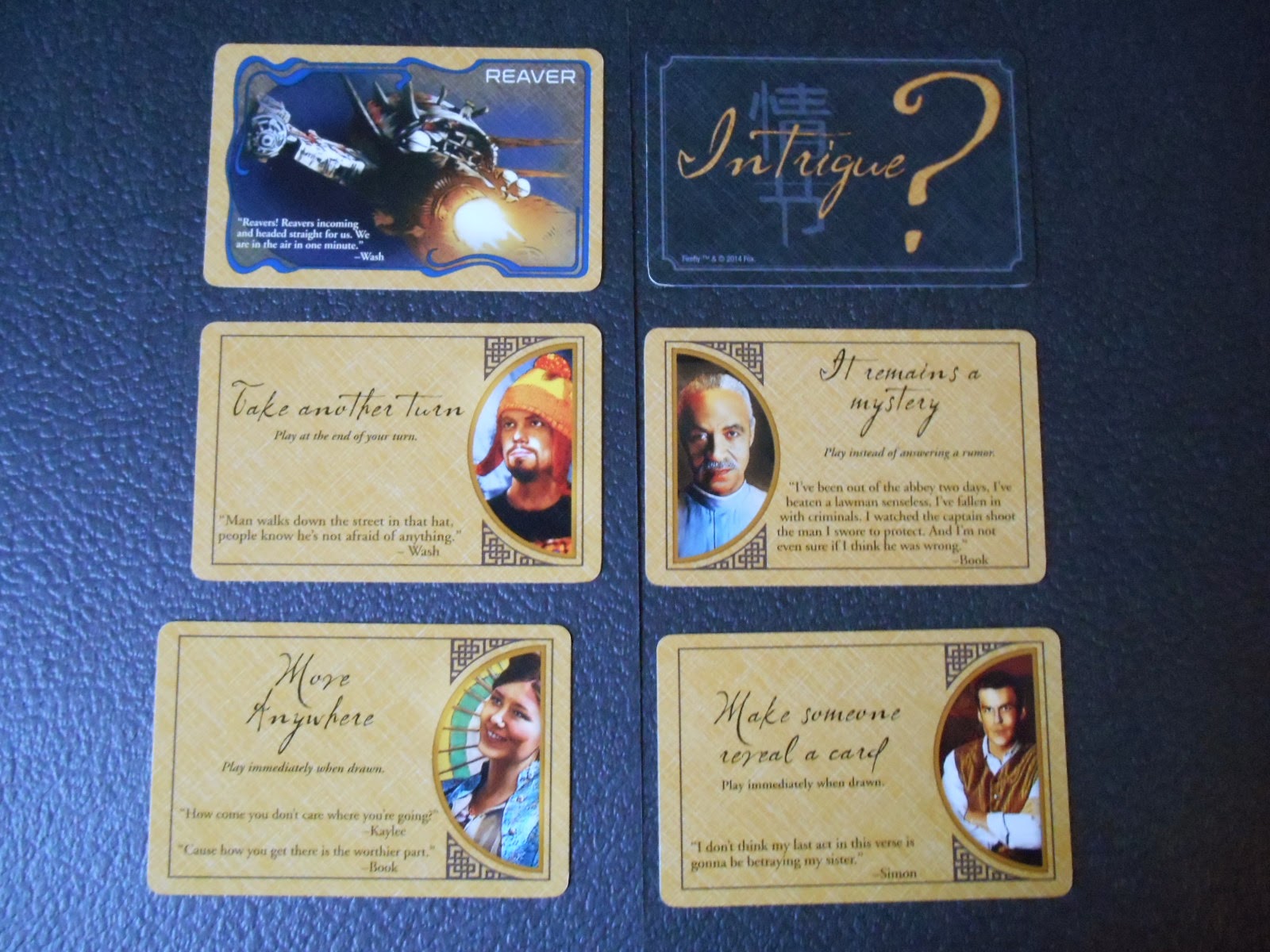 Intrigue cards are an added feature to more recent Clue editions, though they abandoned the idea when they revamped the core game to include hipsters and internet celebrities. They are special spaces on the board and dice where powers similar to those of the Power cards can be used (cynically, it's a way to speed up what is meant to be a game of gradual deduction). Here, they are mostly an excuse to get to include Sion and Book in some artwork beyond the box cover, and to include more quotes from the series (this game is Firefly and licensed by Fox, so there is no sign of material from the film Serenity, save in two Jayne quotes: "sure wish we had some grenades" and "let's be bad guys," which seem like odd mistakes on the part of the researchers, and oversights on the part of the clearing lawyers). One interesting addition are eight Reaver cards, which when drawn force the player out of the game (again, a transparent way to speed the game up, a variation of the Clock cards from DtS).

As with everything else, the room selections are inspired and a tiny bit obvious (Serenity is not a large ship, so that they could find nine separate locations is impressive to start with). Jayne's Bunk is less a valid choice as it is an in-joke with fans, and a particular filthy one that that. There is the occasional instance of the game being perverted-in-context, also including Book's "how... special" line at one point. The art work, as with everywhere else, is fantastic, and the most obvious use of real art instead of manipulation, since many of thee locations, especially from these angles, never appeared on the show. 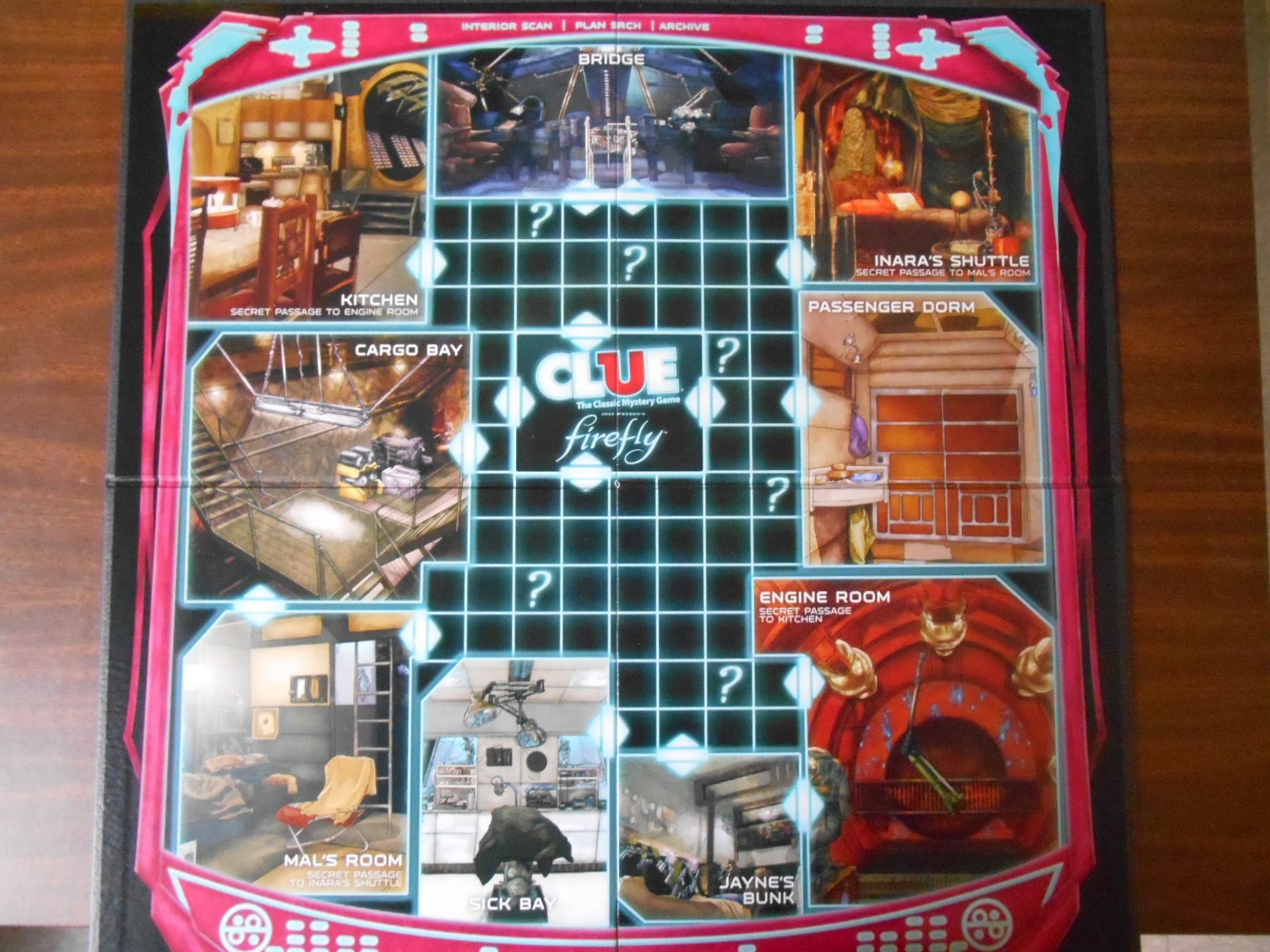 The board sees a major change from the conventional Clue board in two important respects. First, the rooms are considerable larger, each butting up against the other and allowing movement between them. This is, again, a way to speed the game up but severely limiting the number of dice-motivated moment. This is the biggest weakness of this set, in that the board seems almost taken from the Clue Jr set, so small is the actual game space. That said, the larger rooms feature the fantastic artwork, so at least you have something nice to look at while whizzing through a game. Secondly, because the pathway between rooms have been removed, the colour-specific starting locations have been removed. All players start from the centre, traditionally where the envelope containing the answer lays (this is a return to an element from a variation from the 1980s). The interior space is slightly smaller than the envelope. 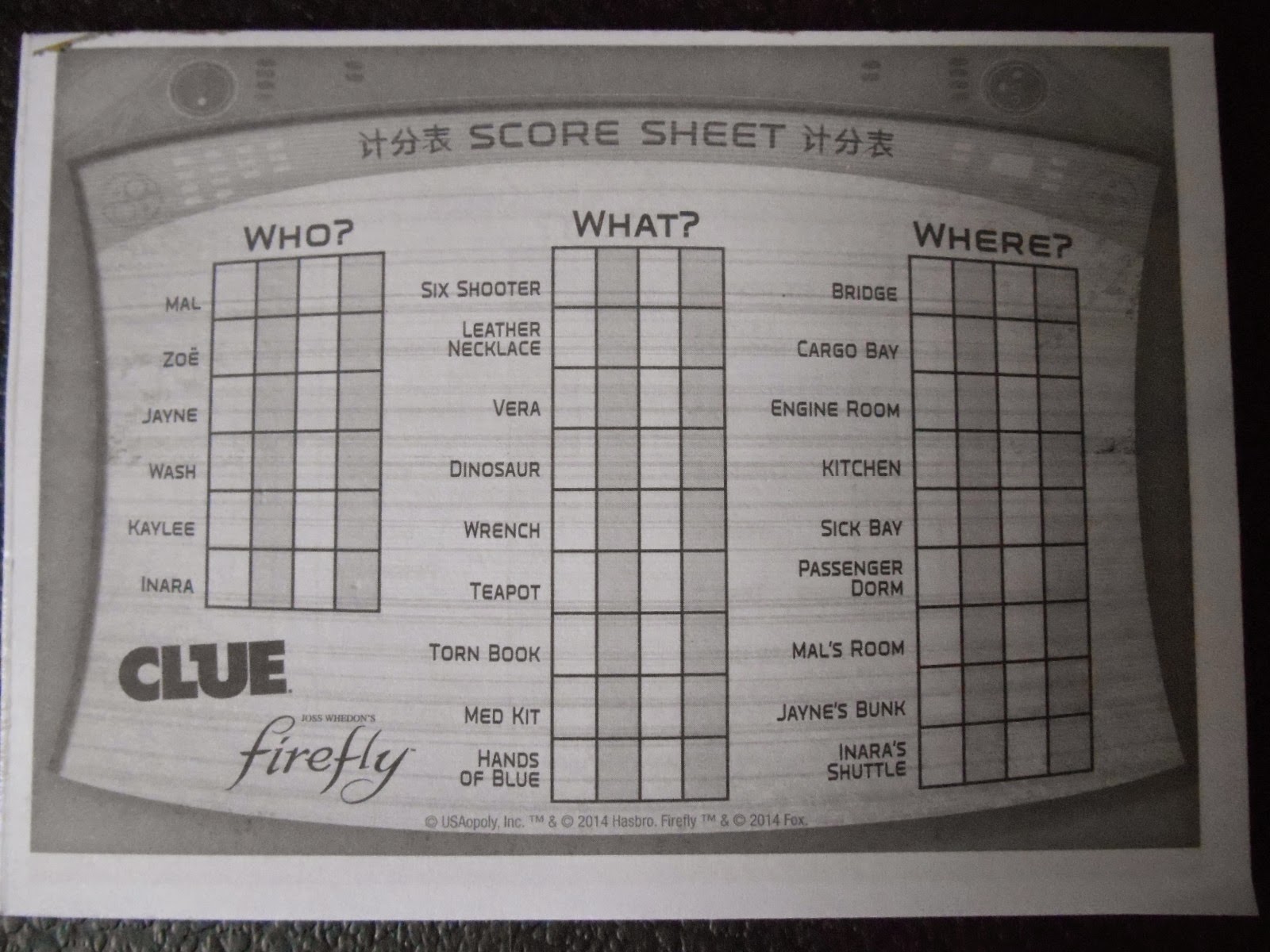 In some recent licensed version of games, the theme is only tenuously applied. Here, it permeates the entire package. Chinese labeling, the curved display screen formatting. It all creates an appreciable air of authenticity, that the company actually took the time to make this a Firefly version of clue, rather than just a copy of Clue with a recognizable brand tamped on it. 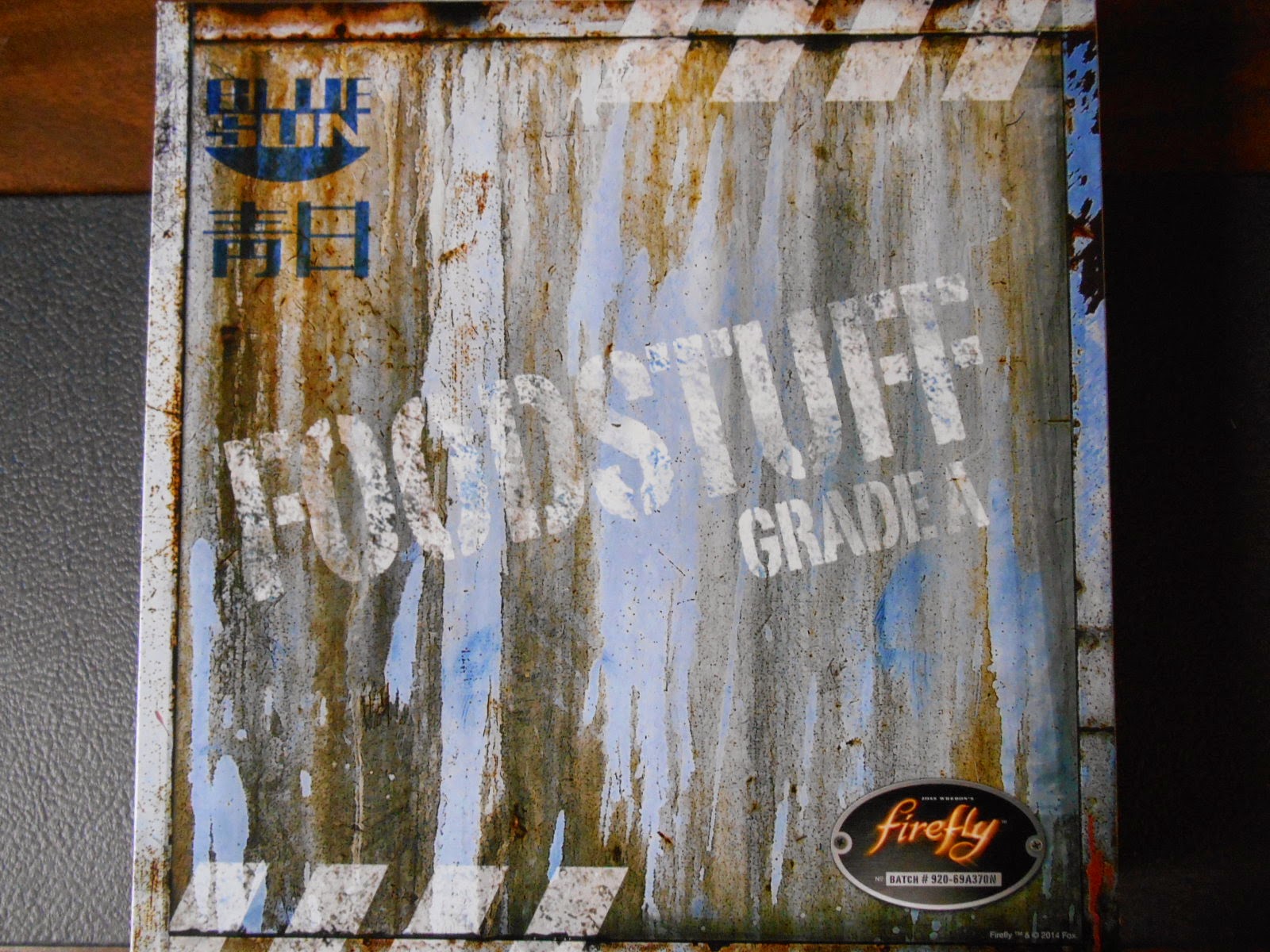 This license does both Firefly and Clue proud. To conclude this review, I include the above image. A replica of a Blue Sun manufactured food stuff crate seen in the series. This is the cardboard prop-up that fills the majority of the interior of the box. It serves no purpose other than to fill space. Most games, including the base-line Clue usually leave it blank. At most, they print the rules on it. Firefly Clue decided no, this was another opportunity to show the property some love. This sums up the attention given to this edition. In fact, this board game shows more reverence and appreciation for the short-lived series than some other, recent, canonal additions to the 'verse. For this collector, I think I've got a new favourite version of my very favourite game.