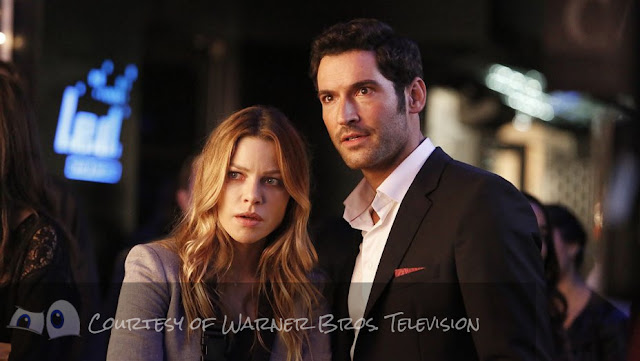 In which the Devil is revealed to be charming and entertaining, if not terribly original.

Much has been said about DC and Warner Bros. relationship with adapting their properties. I’ve spoken about it, half the internet has written about it, and doubtless we will all continue to do so. But what tends to get left aside in those discussions is that Warner Bros. has become quite liberal with their televised adaptations. Aside from the ‘verses that Greg Berlanti is overseeing, DC has managed to get on screen Human Target, Constantine, Gotham, iZombie, Preacher and now Lucifer. Not too bad considering that a decade ago it was Smallville and nothing else. In fact, TV is where DC is outpacing Marvel, something I’ve said from the beginning is the wiser move. Part of DC’s presence on the small screen is that, Berlanti aside, they aren’t even trying to keep to a shared continuity, something I’ve also advocated in the past. Farm out as many properties to as many networks as possible, to whichever creators have a clear vision for the material, and see if something manages to make it past a couple seasons. This is also partially possible because DC, unlike Marvel, does have something of a larger catalogue of characters that don’t fall into the traditional superhero genre, in large part due to the good works put out by the Vertigo Imprint. These, removed from any connections to Steely Men or Dark Knights, have a greater chance of hooking the casual audience, not just the detail obsessed nerd brigade.

And so, despite originating in the pages of Neil Gaiman’s Sandman, the prospect of a Devil who has given up on Hell and come to LA for a change of scenery and a little self-reinvention is an island, one of the many making up the DC television atoll. And, it’s an easy concept for anyone to get on board with, and to the casual viewer, no hint of its comic book heritage need peak through the veil. Of course, the other side of DC’s television bonanza is that none of the series have been particularly good. Human Target was retooled to hell, Constantine was a wasted opportunity, Gotham is… whatever it is, and Berlanti’s shows are in steep creative free fall. So, I wandered into Lucifer apprehensive, to say the least.

Happily, I was surprised. Understand, the show is not breaking boundaries. It is playing quite nicely and safely within the confines of Standard Network Operating Procedure. Except for those dismissive reactionaries in the Mid-West, Lucifer is designed to be broadly accessible and low on cognitive exertion. You won’t work up a sweat watching this show, nor will you need to obsess over every small detail in order to discern some hidden meaning. What you see is what you get, everything is spelled out, and the most subtle thing about it is Tom Ellis’ accent. But despite all that, it is quite a lot of fun. Fun enough to keep me coming back each week, though not actively engaged. I wasn’t looking forward to each episode, but each episode made me happy for an hour. And sometimes that’s all you need. Spoilers with a hint of brimstone follow.

If you want to know what kind of show this is, I must first admit that I didn’t watch every episode. I missed one, near the end. I don’t know which, maybe episode 10? But it doesn’t matter. I didn’t even realize I had missed one until the “Previously On” in the finale. So, this is the sort of show where you can comfortably miss an entire episode, and miss out on nothing of the narrative. I like to call these shows Start-And-Finish shows (and opposed to Start-To-Finish). The only episodes of significant consequence are the premiere and the finale. Everything in between is fine, but so self-contained that if there is a narrative arc, it is minor and happens at a crawl. Networks love these kinds of shows. They are one step up form procedurals, because the expectation is that everything has to have a narrative arc now. Stand-alone and one-offs are an eighties fade that nostalgia did not resurrect.

So, shows paint a vague framework around themselves and that spider’s web of a through line is enough to get corner-of-the-eye viewers feeling good about themselves, but the actual substance of the episodes is week-to-week and completely in passing. Could Lucifer have been arc heavy, building a complex mythology around a heavily detailed and developed character? Yes, but Supernatural has been on for 11 seasons and has pretty much pummeled Christian mythology to a pulp. Lucifer works better without those lofty aspirations. It isn’t shallow, it just isn’t looking to be important. It understands its lot in life and embraces it. I’ll admit to having been put off by the cop show aspect of it at first, but as time and episodes went on, I realized that the show was making good use of the device. It was finding a balance between being watchable and being marketable. And it did it by being charming as hell.

The whole show belongs to Tom Ellis. It just does. The rest of the cast are good, every fine and adept at what they are doing, but they couldn’t hold the show together themselves. Well, maybe Scarlett Estevez as Trixie. She could hold the show on her own. But Tom Ellis’ charm is the beginning and end of the bulk of the show. They cast him perfectly. Easily one of my five favourite Devils, and mostly because Ellis plays him (and the character is written) in a way that the Devil isn’t usually. This Devil is affable. He’s seductive. But he isn’t mean. He is cocky without being arrogant. And he isn’t selfish. Every other – any other – Devil cares only for himself, only for getting the best out of a deal. But right from episode one, this Devil shows himself to be an angel who cares about people. In fact, I’d go so far to say that this Devil did more to remind me that he is a former angel, a being reportedly made of love, than any other depiction. He punishes the wicked not because he derives pleasure form it, but because they deserve it. His methods are just.

Likewise, he wants to see people who deserve success succeed. It goes a long way to making him less a villain and more an anti-hero. And, it manages to do it within the framework of the classic story of the Devil’s Fall. They aren’t making things up out of whole cloth here, they are just looking things from a new perspective. Which, as I’ve worn down mountains trying to explain, is the whole point of adapting. Why tell the story of the Devil again if you don’t have something original to say about the character, while still working within the confines of the established character? So, the Devil draws out your desires, he tempts you, just as pagans and true believers have always feared, but the show looks at it as much from the other side: what happens when your desires are reasonable, or good, or earned? It goes against any puritan notion that all desires are bad. It shows a Devil in balance, and that is a nice change. Never once is this Devil presented as Evil. He’s just… well meaning, with a twist.

Yes, the show was frustrating at times. The story arc with Malcolm (Kevin Rankin, who had previously played Devil on Justified) in the second half really felt like a convenience story line, bobbing and weaving as the writers needed it to rather than having a clear map of where it was going. Malcolm’s intent seemed to shift too often for him to have been wholly constructed before he was introduced. And the entire finale was as by-the-books as you could get. The enemies coming together to work a common case, the sudden and inexplicable changes in motivation, the requisite self-sacrifice and seeding of future threats. As much as the show tied itself to convention and rode that to success through the rest of the season, the finale felt like too little, too much of the old tropes and clichés, and not enough spark. But I rage against inconsistency all the time, so I can hardly fault them for being consistent, even if that consistency was minorly disappointing.

I mean, the show pretty much does what it says on the tin. If it supposes something, that supposition is pretty much correct. Which makes the one lingering mystery – why can the Devil be hurt by and around Chloe – pretty unmysterious. Angels and demons can hurt angels and demons, things made by angels and demons can hurt angels and demons. It then stands to reason that Chloe is either an angel or a demon, or was made by an angel or a demon. I really don’t expect the reveal to be more complex than that. Since we haven’t seen her father yet, my money is that he was an angel, making Chloe a Nephilim, and insusceptible to the Devil’s wiles. That is the straightest answer available, and this is a show that goes for the straight answer. That’s not a fault, it just doesn’t indenture any long term affection. It makes for in-the-moment fun, but when something happens that I was expecting, I feel disappointed. I’m just the sort of person who would rather be surprised than right. But not everyone is, and this is a show that definitely plays more towards confirmed expectations. But it does it with a smile and a nice bit of piano and a lot of single entendre, and it really is hard to think too negatively about it. Lucifier, despite what those buzzkills at the Dozen UnHappy Mums think, is the happy puppy dog of comic book adaptations: no matter how many times it takes a leak on the carpet, you still want to rub it’s belly.
Share on Facebook Share on Twitter Share on Google Plus