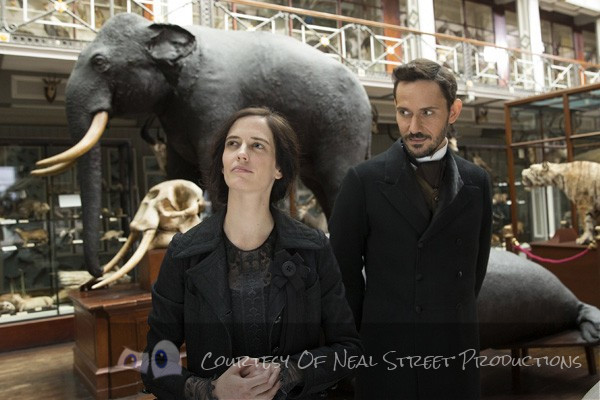 In which this is all we get; there isn’t any more.

Perfectly in keeping with how Penny Dreadful has operated since the beginning, without warning it has ended. In theory, I’m alright with this. I am a firm believer in less-is-more, and that a few seasons of fewer episodes make for better, more focused story telling. John Logan would seem to agree, claiming that he has known as far back as mid-season two that Vanessa Ives’ story would end here and now. Except it really doesn’t feel that way. In fact, I would go so far as to say that I don’t believe him. Because this season never felt like it was the last. It certainly felt like a progression, an escalation of what the first two seasons was building towards. And for the first two thirds of the season, it was fantastic, exactly what I’d come to expect from this mad, brilliant series. Then, suddenly, it stopped what it was doing, turned on its heel and took off in entirely different direction. A direction that vaulted towards a resolution that felt rushed, and ineffective, and left me significantly dissatisfied. Not dissatisfied in the manner of the ending, just at that it didn’t end with as much detail in which it should have.

From day one, Penny Dreadful has been a slow burn show. The wonderful thing about being character based rather than plot focused is that the characters took exactly as long as they needed to figure things out, and never allowed the plot to push them around. This created some very odd pacing issues, likely the sort of issues that turns some viewers off. Whole episodes would focus on single characters in isolation, burrowing under their motivation and revealing their true selves. Then there would be a flurry of activity in the next episode, as this greater understanding was applied to whatever beastie was badgering them. And to start, this season was no different. Picking up where last season left off, with each character running to a far-flung corner of the world to avoid their problems back in London. Except Vanessa, who walled herself away hoping to fade into the rot and shadows in which she surrounded herself. And yet, from this first episode, things seemed uneasy. Logan didn’t seem overly interested in exploring all these new status quos. The Creature (or Caliban, or Claire) walks his way back off the ice flow, and is in Londontown by episode next. Victor is saved from his addiction (which never plagues him again) by the timely arrival of former class-mate Henry Jekyll. Sir Malcolm is whisked away to America, hot on the heels of Ethan, who trades the keeper of his leg-iron keys like he’s avoid the glare of the sun. Lily and Dorian’s plot to create a master race of immortals has been replaced with a women’s liberation with extreme prejudice movement.

Once the season got running though, everything seemed to click. At the very least, each character had something to occupy themselves, and more than enough to drive their continued evolution. And all of it came via a voice whispering in their ear. Victor decides to kidnap and mind-rape Lily, at the urging or Jekyll. Malcolm finds new purpose and drive thanks to the mystic prompting of Kaetenay. Vanessa had Dr. Seward on one hand, the seductive Dr. Sweet on the other, pushing and pulling her towards the light and the dark. Ethan had to tend with Hecate’s constant weaseling, and Lily and Dorian had one another, to weakening effect. Even the Creature had the memories of his former life taunting him. So, it was a season of outside influences pushing the characters in directions that they would not naturally travel. The bulk of the drama was derived from both the character succumbing to these exterior influences, then realizing their mistakes and pulling back. “It is easy to be monsters,” says Dr. Frankenstein. “Let us try to be human.” If ever there were a thesis statement for the series as a whole, that might be it. And it holds up. Time and time again, these characters do horrible things because it comes easy, and come the nearest to defeat when they attempt to redeem themselves.

More than once, the acts of redemption require acts of equal monstrosity. Or, at the very least, that to save one, another must sacrifice. An excellent example of this would be Ethan and Malcolm’s relationship with Ethan’s father, played with fantastic aplomb by Brian Cox. Ethan renounces his faith and soul and status as the salvation of the world, all for the chance to exact revenge on his father. When the time comes though, he falters, realizes he is incapable, but has driven things too far past the brink to salvage them. It requires Malcolm to step up and kill Jared in Ethan’s place. It saves Ethan, and is an act of minor defamation on Malcolm’s soul, but utterly maintains Ethan’s. These are the sorts of interactions that all of the characters go through this season. Unfortunately, the season feels truncated. The first six episodes absolutely feel like they belong, but the last three feel as though they belong to an entirely different season. As much happens in those three episodes as Logan would have been able to devote a full complement, in his own pacing. And likely should have, because frankly the actions of the characters in the last three take huge leaps that do not follow the logical path there were on to that point. It feels like they are decisions they would have gotten to eventually, but the process of them coming to those decisions organically was removed.

This is best seen in the plots that ultimately went nowhere. Most glaringly were the Jekyll and Lily storylines, of which so much time was devoted, but of which nothing came. Likewise, it is seen in the fact that Lily and the Creature’s stories have no ending as the series closes. Lily certainly would not roll over and acquiesce to society, even after her losses and betrayals. The Creature too is stripped of everything that might have given his life purpose again, but that isn’t an ending, it is the beginning of an end. What do both of these characters do after being dealt these losses is what is interesting, and what matters. And would have been exactly the sort of thing that the show would have delighted in exploring. Why spend so much time in Bedlam if it plays out to nothing. It is like littering a stage with pistols and none go off. Were they added just to give the characters something to do in the meantime, or just to tick off some list of Victorian characters Logan felt compelled to include (which I don’t believe, since Jekyll was meant to be Dr. Moreau until very near filming). Dracula himself feels like a half notion, a story that was being built towards over the life of the series, but ended up an after image when time fell short. The immediately captivating and intriguing Catriona Hartdegan was clearly designed to be a character for which more was meant, but little happened. Too much of the end seems like conclusions rushed to convince me of anything other than Logan suddenly realizing that he had less time than expected. Or, maybe he’s just really bad with plotting, and got too caught up in delivering absolute cracker episodes like A Blade of Grass, easily this season’s standout, and yet another showcase of Eva Green’s talents.


But for these faults, the series remains a deeply impressive one. The laser focus on character is something that even other character-based programs do not approach. Game of Thrones is very much plot driven, as are most other rating juggernauts. Penny Dreadful was far more interested in examining the why of persons, not the how of events. So, even with the truncation of events, we know these people intimately enough to see reason in their decisions. I feel that I know Lily’s suffering greater than I know the whole being of some of my immediate family members. That the struggles that Vanessa and Ethan suffered with their faith, or Malcolm with his grief, were as laid bare as struggles that I’ve grappled with in my own mind. It is rare to be this close to a fictional character, to know so many so thoroughly. I very much wish more TV – hell, more fiction in general – were this invested in their players. And were wise enough to know, even if they can’t tell the whole story they wanted to, that there is a time in which the story is done.
Share on Facebook Share on Twitter Share on Google Plus