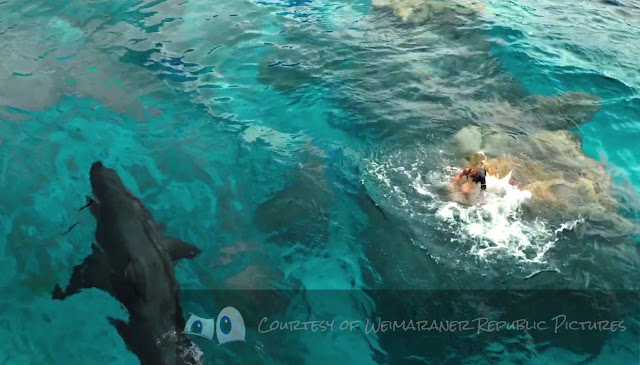 In which shark attack movies are redeemed after Jaws 4 and Sharknado.


There are two kinds of movies I really have no patience for: musicals and horror. Happily, The Shallows isn’t either of those, which was a surprise. Not that it wasn’t a musical; I rather supposed that Blake Lively wouldn’t be bursting in to song (the shark too, for that matter). But that it wasn’t a horror movie. This, despite the thirteen trailers that preceded it that were all identical, and were about a young woman in a tank top being aggressively shaded by a faster than usual shadow. Because that is the state of horror films now: jump scares and running through poorly lit halls and dead eyed children. It’s been this way since the eighties, when horror movies stopped being about sustained terror and started being about boobs and getting the audience to poop itself every ten minutes. Long gone are the days when movies like the Universal Monster movies could be considered horror. Gone are the days when the Exorcist, or Jaws would fall under that banner. Except, as it turns out, for The Shallows.

The Shallows owes very much of its existence to Jaws. It is, in many ways, the sequel that Jaws never got. It is, in many more accurate ways, what would happen if you took the last ten minutes of Jaws, when Brody is stuck up the top of the sinking boat, and made that an hour and a half long. And took away his gun. It is a suspense thriller in an age when people don’t have the time or attention span to feel tension building. It is a film that has essentially one actor, and very little dialogue (though quite a lot of gratuitous swimsuit shots, which I assume was meat to make up for the lack of word noises). And it is about a shark trying very desperately to eat that one actor. There is a multitude of ways and reasons why this film should not work, why it should be a horrible mess of a film, and I am so very really properly pleased to report that it is delightful and properly frightening, and very mostly good indeed.

It is at this point that I am going to pause in my review, and wonder aloud if Ryan Reynolds, Blake Lively’s husband, played any part in convincing her to take the role. I only wonder this because, some years back, Reynolds appeared in a film called Buried in which he was the only actor in the film aside from a disembodied voice, where he was buried alive in a coffin for an hour and half, and it was his best film before he put on a black and white mask and made $780 million worth of dick jokes. I wonder if, in their late night discussions of life, the universe, and what colour to pain the kitchen, he might have mentioned that with the right script, a one actor show can be a real talent showcase, especially if the actor is fearing getting typecast. This is an unknowable question, but the result is that the both of them have opted to take on this unsupported roles, and both came out the better from the experience. We now return to the review, already in progress.

Shallows takes a lot of stylistic cues from Jaws, it does so unabashedly, and it does so without feeling like being a cheap ripoff or a homage. Director Jaume Collet-Serra does what any competent director should do: he shows talent in using skills that are most effective in conveying the tone he wishes to impart. This largely manifests as less is more. He only shows as much as the audience needs to see in order to paint their own picture. The shark, blessedly, is only seen in glimpses (and much like Jaws, when it is seen in full, it looks ridiculously fake). But that’s alright, because the movie isn’t about the shark. It’s a shark attack movie where the shark attacks are the least important detail. It’s the idea of the shark that stalks the waters. Because the entire second and third acts take place within a thirty square foot of shallow water, during which time Lively is almost completely stationary. She knows exactly where she is, and can’t move; she knows exactly where the shark has been and where he could be, but can’t know for sure. And the result is leagues more terrifying than being constantly badgered by the thing. More realistic too.

The realism is a big part of what sold me on the film. The film doesn’t need to provide little details, but it does and it adds definition and real world substance to the scenario. The shark isn’t some mindless killing machine, it is there because of a whale carcass fifty feet away. There is no supernatural vendetta the shark has against Lively, it’s just sticking near a source of food, and doing what comes naturally. Likewise, Lively’s injuries 1) mount the longer she is trapped, b) get worse the longer she is trapped and iii) have ramifications on what she is able to accomplish after she suffers them. At least, until the climax, when the film pretty much forgets itself and goes full Jurassic World, but I’ll get to that in a minute. The injuries she sustains are enough to slow her, not cripple, and her fixes are slapdash but effective. The time she spends stranded on a rock reduces her effectiveness in bettering her situation. The tide plays as critical a role as the shark in providing her motivation. A realistic depiction of time, distance and temperature make this a far more believable man vs nature survival story than The Revenant.

Now, the quibbles. First and foremost, the first act is shit. Sit through it. It is worth it. But the first act has a bunch of rubbish dialogue and clunky exposition that is irrelevant. As much as establishing the character’s medical background and why she’s alone on the beach do come into play, there is a load of motivational stuff like her mom having died of cancer and her father being disappointed in her that is useless and not needed to enjoy the hour she is trapped on a sinking island about to be eaten (tip to writers: taking strength from another’s character’s fight against cancer is only motivational if they won their fight against cancer. Lively shouldn’t be aspiring to the same outcome when mustering energy to repel the shark). Second, because the film is a shoestring budget, the few instances of CG look particularly terrible. Like, CW hour long superhero drama terrible. For the most part this is obscured by the ocean’s surface, and overwhelmed by the practical, on-location filming. But it completely took me out of the film when Lively falls off her rock and into a field of jellyfish that were rendered using what appeared to be a Windows 95 screensaver.

There are three deaths in the film, and really only one is necessary. The impact the audience was meant to have was accomplished then, making the other too sensationalistic and just to keep the teenagers in the audience from dozing. The first attack might well be the film’s best scene, certainly Lively’s best, as the camera lingers on her long, increasingly horrified reaction to something completely off camera. The other two deaths, while shot reservedly, aren’t strictly necessary. And, if I’m being extra special quibblesome, I really wish the shark wasn’t a Great White. Great Whites barely attack humans, even when provoked, and there are many faster, more deadly and more interesting sharks out there for whom the story would have needed changing in no way to accommodate, like the Tiger Shark, or Bull Sharks. It is like every Jurassic Park movie having raptors, because they were so awesome in the first one. Because of Jaws, the only sharks we get now are among the least interesting. And speaking of both least interesting and the Jurassic films, the climax of The Shallows really does let the rest of the movie down by feeling like we’re suddenly in a blockbuster instead of something smaller and more intimate. I suppose I was just hoping for a more interesting ending than something that felt more at home in a SyFy Original Movie.

But the whole vastly outweighs the imperfect, and The Shallows follows other smaller and original fair that has been released this year in the shadows of the big budget and action packed. And like those other, smaller fair, I found myself charmed and completely won over. I only wish it hadn’t been as well received or successful as it was, because that now means that we’ll be getting a Shallows sequel every year from now until they reboot the franchise to take place on a cruise ship aquarium, or something. Those films will be shit. This one wasn’t.
Share on Facebook Share on Twitter Share on Google Plus