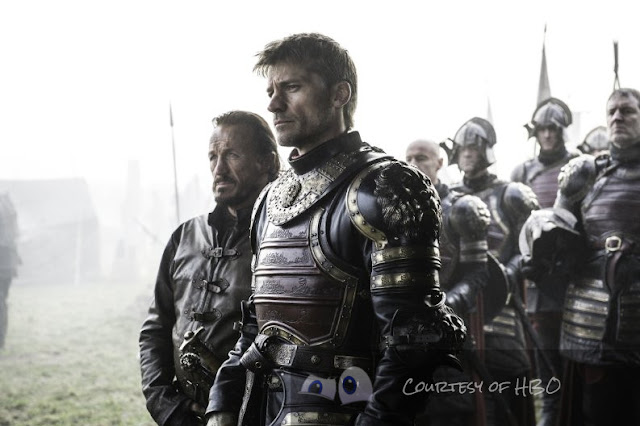 In which we’ve only got 15 hours left, and that’s starting to seem like too many.

I nearly gave up on Game of Thrones after last season. I very nearly cut ties with this once mighty series for good, because last season was atrocious. Going into season six, I was extremely hesitant to let down my guard, or give the series back any of the goodwill it had squandered. Now with season six in the bag, a small, fleshy part of me is relieved by the fact that it was a marked improvement over five. That being said, the show has slipped into a comfortable self parody of its former self; almost like it is its own off-brand rip-off. The show is measurably worse than it used to be, and arguably not good anymore. Spoilers, like unfortunately filled meat pies, are present and should be prepared for.

Let’s get right down to the nitty-gritty of why this season worked better than last. Last year, for the first time, the writers were “off book.” They didn’t have Martin’s books to guide them through the remains of the narrative, and the floundered. Hard. At the time, I said that the writers were revealing themselves not to be writers at all, but very adept (and lucky) adapters. When they could transcribe events from the books directly to the screen, and make like necessary changes as needed, they were in their element. But as soon as they were responsible for the whole cart-load, the cart tipped. This season’s slight rebound was down almost entirely to the fact that the bulk of it was a patch-work of the plot points from the novel that they had skipped over originally. In some cases, plot points that the writers had said were inconsequential when they skipped them, but are suddenly important enough to cobble together to hold this season up. And it worked, in that there was clearly an ember of life behind these events that simply isn’t present when the writers are making things up themselves. Those storylines tended to belabour, decompress and go very little of anywhere. The transcribed plots also tended to go nowhere, but seemed like they had a purpose buried deep within their DNA. At this point though, huge swatches of the series feel vestigial, the result of an evolutionary process that feels far more top-down than bottom-up the longer this series lasts.

There is a bigger issue at play behind the scenes than the writers just not having the chops to maintain this thing they’ve created. There is a significant slippage in caring about detail that is more than a little frustrating. This is a show that, like the novels, thrived on detail. Detail of character, detail of world building, and detail of plotting. Everything hung together like a well made crystal chandelier. Now, is lazily sits, twisting around itself like a child-made model of the solar system. By way of example, take the travel time in the show. The early seasons built into the narrative the amount of time it took characters to travel from one place to another. It informed how the stories unfolded, and time acted almost as a character in its own right. Now, characters leap from place to place like Sam Beckett, crossing continents between episodes or even between scene breaks. Producer Bryan Cogman, on Twitter and to EW, explained that “We realized a while ago that if we tied ourselves in knots trying to make all the ‘story days’ line up between all the characters the momentum would suffer.” Which is another way of saying they let something small snowball out of control, and rather than fix it or find an interesting way of turning it to their advantage, they said “fuck it” and did what they wanted regardless of the fact that it distracts entirely from the narrative and is clearly obviously painfully lazy as hell.

Likewise, the writers don’t seem to be interested in the characters anymore. When the show began, it was clearly a character based show. That has shifted, as the writers are now working towards a series of very specific events (this, arguably, has always been the motive of the show, as the writers long ago admitted that the reason they wanted to make it at all was to film the Red Wedding). But it so much more pronounced now, and obvious that they are working towards an end regardless of everything else that happens. Despite the first three seasons leading to it in every conceivable way, before the Red Wedding you wouldn’t have guessed that was where it was heading. And every storyline and every character (which some exceptions) was pushing the narrative to that end. Now, the end result – Dany’s invasion, and a grand war with the White Walkers – are painfully obvious, and very very few of the storylines actually matter because these things are going to happen regardless of what else is going on. The literal fire sale the finale had on a huge bulk of characters is evidence of that. Here are a half dozen plots that have been developing for years, at the time seemingly towards something, only to be cut off and rendered meaningless by the fact that the writers A) couldn’t be bothered to make them relevant, and 2) wanted to have a Big Damned Finale that everyone would be talking about the next day.

The term Flanderization refers to the trend in long form storytelling when a single trait begins to overwhelm a character or narrative. It is a form of reduction, whittling a robust and well developed concept down to a lowest common denominator mostly because of entropy and malaise. I feel it is a just term to be applied to Game of Thrones. Remember back in season one, when they coined the word sexposition? When the show wanted to titillate the audience, build it’s public brand, but had so much information to impart the easiest way was to explain things with nudity? And over the seasons, the sexposition has disappeared entirely. It has been replaced by what the audience was reacting to more: blatant nudity. Then violent nudity. This came to a head last season when the show was roundly and rightly criticized for sensationalizing rape. The reaction: this season there was barely any nudity at all. Dany had one, in a moment of triumph, and there were several gratuitous shots of male genitalia (itself a reaction to the criticism the show received for being generous with female nudity and very prudish with man-bits). But it is an example of a larger issues. The way the show has depicted violence has progressed the same way. In the early seasons, the violence was harsh and brutal, but only shown when necessary. There were a lot of off-screen events and reaction shots. Now, the show spurts blood at a moment’s notice, in extreme close up and in HD. Like the nudity, the violence went from being meaningful and with purpose to being gratuitous and hollow.

None of that is to say that the show isn’t still capable of brilliance. There were several moments this season that were deeply affecting – which makes it stand in greater contrast to last year all the more – but most of those moments came from character deaths rather than character victories, and being affected by a character’s death is a cheap way to illicit a reaction from the audience. It requires no work to achieve, because people naturally grieve, and grieve all the more when the death is tragic. And tragic all the more when the death is narratively meaningless. The net result is that Game of Thrones becomes with every episode a paler version of its former self, and that like so many shows that had immense popularity thrust upon them (I’m thinking more pointedly of LOST), the longer they go, the more they falter under the weight of that popularity and the expectation that comes from it. At least when a show like Penny Dreadful falters at the end of its life, you know it was because the writer was too ambitious, not because the turgid will of the audience loomed too heavily over the process. The writers claim there are only 15 hours left in the life of this show, and I’ll stick with it to the end, which might be more than it deserves. But now that Winter has come, it really doesn’t seem to have as much bite was we’ve been warned it had.