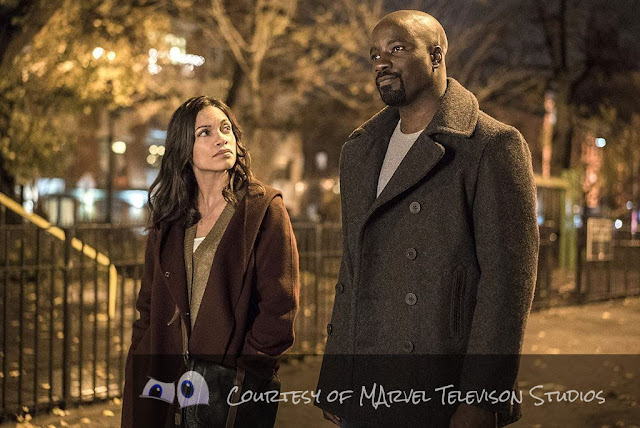 In which Power Man runs out of juice.

Back when I reviewed Jessica Jones, I said that Mike Colter’s portrayal of Luke Cage made me more excited for his solo series than for pretty much anything else coming up in the MCU. Now I stand back and wish that the series had lived up to those expectations. It was only a matter of time until there was a series faltering of the Marvel brand, and I feel like this might be it. The TV division has never been the stronger of the two arms, it’s more the puny left-handed cousin to the meatier, Hulk-like bulge of the cinematic side. But Luke Cage stumbles harder than Daredevil’s second season did, as had as that may seem, and part of me worries that it is now a systemic issue facing the television productions. The money is clearly there, as these series make their most of their scenery and imagery and special effects budget. But the story just isn’t there with Cage, and worse still, the characters aren’t there. Even the stalwart and reliable Claire Temple is pushed back into the role of love interest, a mold she managed to escape back in Daredevil’s first season.

Cage starts off strong, and the first six episodes seem like a show that is going somewhere, and trying to say something. But it was too much too fast apparently, as the second half of the series stumbles and trips, uncertain where the story is going or what the characters are doing. Antagonists rotate through on a lazy Susan, while Cage himself is stuck treading water the entire 13 episode run. The meatiest story they had for him – the death of his wife – was resolved in another character’s show, leaving Cage the hero’s journey to travel on. Unfortunately, despite his near per-episode refrain that he “isn’t a hero”, he pretty much gets over his crisis by the end of episode one. Unlike Matt Murdock, who has real ethical struggles to overcome, or Jessica Jones who has severe trauma to work through, Cage’s sole problem seems to be not wanting to get involved. He just seems cantankerously lazy. It’s not as if he’s trying to protect his identity. He constantly gets involved, and shows his face at every opportunity. I’ll say this for Cage, he’s the only character in the MCU short of Tony Stark to end up with his face on the news as often as he does. Makes one wonder why no one recognized him from his past life sooner.

The reason for that is, poor writing. It’s not that the words themselves are bad, it’s that there is no narrative flow. Most episodes feel decompressed. Several flounder by tacking on flashbacks, or lots of conversations full of exposition, in the hopes that it will distract the viewer from noticing that things are progressing at a snail’s pace. The final episode devotes nearly fourteen minutes to a street brawl, the action movie equivalent to watching someone learn to play an instrument.  What character development does come tends to arrive in sudden bursts, and then gets thinned down by the pacing and the padding. Cage can’t claim to be the first of the MCU products which I’ve given up on - that would still, and always be Agents of SHIELD – but it certainly was the first of the Netflix shows I considered not finishing. As it was, it took me twice as long to get through them as any of the others. While Daredevil and Jones usually left me itching to watch the next one, each episode of Cage felt like homework. I really did not look forward to having to watch another, and another, and was happiest when I reached the end. If I was looking forward to seeing the solo series after Jessica Jones, now I am actively routing never to see another series of Cage going solo again. Better to pair him up, where he doesn’t have to carry the load solo.

Which isn’t to say that it is either the character’s fault, or Colter’s. Colter is just as good here, when he has the opportunity to do so, as he was in Jones. The difference is that on Jones he had something to do, his character served a purpose. Here, in the centre of his own tale, he seems superfluous. In fact, upon closer examination, he might have been a detriment to the tale. Diamondback would have been far less likely to enter into events if not for his personal vendetta against Cage, leaving the rest of the rogues to eventually get caught by Misty Knight. In fact, this series might have played better had it been a Misty Knight solo, as her character received the bulk of the development, and had the closest thing to a perceivable arc. The writers seemed more – even most – interested in her, letting Cage risk becoming a supporting character in his own story. Hell, even the chemistry between Simone Missick and Rosario Dawson was more palpable than it was between Colter and Dawson. Dawson’s involvement, by the way, seemed entirely contractual. The character isn’t strictly necessary in the narrative, and despite the presence of her mother, there is little in the way of diving in to this character’s backstory. Which is fine, she has thus far proven to be a character that is better when being realized in the moment. With each brush up beside another hero, she is driven to become stronger, faster, better than she was. If she doesn’t take her rightful place among the heroes come the Defenders, I’ll be greatly disappointed. That, and Dawson seems to be enjoying herself immensely, even if she isn’t getting much to do day-to-day.

The villains are the worst the Netflix series has offered, if only because there are so many of them, they are all playing musical chairs, and none of them are around long enough to showcase any real menace. Cottonmouth is about the most threatening, and Mariah might have been the most interesting if she had been allowed to evolve into an actual danger. Diamondback is too cheesy and traditional, with his conveniently interwoven backstory and tendency to pontificate to his gang or victims, trying to occupy the crazy corner here, when the situation doesn’t necessitate a crazy, just someone organized. He feels like they were going for Joker of Harlem, but they just got a preachy buzz kill instead. If a hero is only as good as a villains they face, than it is no wonder that Cage spends his series groping in the dark for a sense of identity.

Weirdly, Cage is the most interconnected to the rest of the MCU, through references alone. No one mentioned by name, though Temple is constantly referring to her really good lawyer friend, and Jessica, and Punisher, and the Avengers all get name dropped. Conversely, because the series takes place in Harlem, so far uptown and away from the happenings in Hell’s Kitchen, the series is the most disconnected from the rest of the MCU. Nothing else that has happened in New York has touched Harlem. There were no alien invaders, no gang war, no Kingpin. Just a version of Harlem that feels like someone was trying to make Harlem into what Quentin Tarantino thinks Harlem is like. You’d be forgiven for thinking that this version of Harlem is in New Jersey, for all it feels like it is part of the New York that Netflix has showcased so far.

This is the most boundary pushing of the series, in terms of language and sex. But rather than make it feel real, or edgy, it just further drives it away from its brethren. Considering that Daredevil had a man’s head bashed in with a car door, and that this hero actually has super strength, Cage is a bloodless affair. There is message here too, and plenty of room for both sub and surface text. A bullet proof black man in a hoodie at the end of a cop’s gun is too relevant not to touch on, and to the credit of the writers, they don’t back down. They make their commentary, and forgo subtly in the process. I cannot (and should not) speak for the effectiveness of this approach as a balm for the community, as I do not belong to that community. I’m just a guy watching TV, and as honourable as the intent, it isn’t particularly good TV.