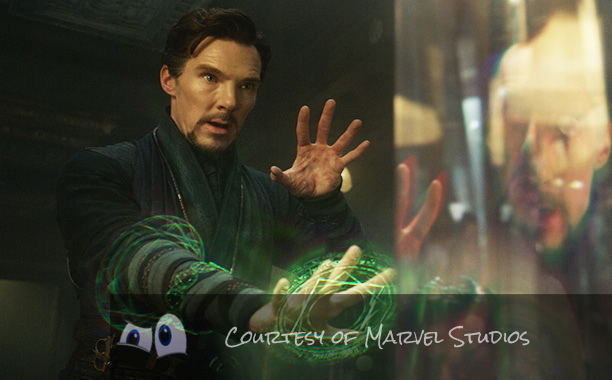 In which Marvel begins its magical mystery tour.

Doctor Strange is Marvel’s fourteenth film in the MCU, and it has begun to show. They have established a formula that has made them a lot of money, and that has clearly made them wary of straying too far from the formula. Or, worse, leaning too hard into the formula, to the detriment of character, plot and story. And as much as Kevin Feige might like to claim that each film is an exploration of a different genre through the medium of superheroes, the films very heavily rely on sameness, especially these origin stories. In terms of awkwardness of plot, underdevelopment of characters and general disposition, Doctor Strange reminds me greatly of the catastrophic Green Lantern movie. It isn’t worse than that film, but it cannot be considered any better.

Let’s get this out of the way straight off: this movie looks amazing, if you like kaleidoscopes. I saw it in IMAX 3D, and I have to admit that the film made great use of depth, especially as Strange is sent spinning and tumbling through the multiverse. I have no idea how this will translate to standard viewing, but I imagine that something substantial will be lost in the downgrade. However, when the best thing that can be said about the film is that certain scenes look very impressive in a particular format, then that might be a sign that your film has bigger problems.  A reliance on a gimmick is usually either a sign that you are attempting to cover up the lack of substance elsewhere, or you put so much effort into the one, the other fell by the wayside.

The film is also pretty funny, comedy punched up apparently by Dan Harmon. It has that same level of sarcastic snark that Iron Man set as the standard for the entire MCU. Not every joke works though, for two reasons. First, some of the jokes just needed of a bit of tightening in the edit, but mostly because these actors are not snark actors. Benedict Cumberbatch, Chiwetel Ejiofor, Tilda Swinton, even Rachel McAdams are all more than capable of comedy. I know, I’ve seen it. But they aren’t Robert Downey Jr, whose wit comes from a borderline sleazy charm, capable of a caustic jab or a quick rejoinder; or Chris Hemsworth, who delivers every line with the utmost earnestness. Strange’s actors are more comfortable with a longer form of wit, a more understated, sardonic form of deadpan. Here, they flounder with a very – I’m going to say it – American sensibility. The scene that plays the best with the humour is when Strange (Cumberbatch) first meets The Ancient One (Swinton) and is greeted with enigmatic bemusement.

But looking good and having the occasional laugh does not a movie make, and this film falls to the worst qualities that have been present with Marvel’s movies since the beginning. The other movies  spackled over those flaws with interesting, engaging, characters for us to cheer for and sympathize with. This film is far more concerned with spectacle over engagement, and think that pseudo-science Harry Potter fight sequences make up for the fact that we either know nothing about these characters, or are given no reason to care. Stephen Strange, by benefit of having the most screen time, is the most fully flushed out character, and even that is at a bare minimum. He begins as an arrogant playboy genius surgeon, interested only in his own glory rather than actually helping people. His hands are mangled in an accident, and his search for a cure leads him to become a kung-fu Jedi. We’re meant to follow his progression from egotist to hero, but that journey never feels fully realized. At no point in the film does he learn the value of helping others. In fact, he repeatedly denies his new found talents. Really, the only reason he acts heroic in any way is out of self-preservation, or in the third act, guilt. This isn’t a noble journey of discovery, it’s just another form of arrogance.

Part of why this journey might feel inorganic is that the film can only reasonably take place over a ridiculous length of time, a length of time that the film is terrible at reflecting. Due to an appearance of the Avengers tower in the New York skyline, the film must start in 2012, leading up to the modern day. However long it would take to have seven reconstructive surgeries on your hands plus recovery, and (even with photographic memory – something mentioned once, midway through, and never again) however long it would take to become a master of magic. Beyond the growing of a terrible looking beard and the occasional colour change in his tunic, there is nothing to indicate that such a length of time has passed. When Strange and Palmer (McAdams) reunite, there is the supposition that they’ve been apart for years, but to look at them, and considering what the film has shown us, it might have well been a long weekend.

The script has a huge exposition problem. And unfortunately, that problem is given form in Mordo (Ejiofor), who spends most of the film explaining things. But the movie is grossly uninterested in showing us how things work, or how things happened, preferring to loose itself in montage or to fill in time with endless descriptions of things that might have been interesting to experience ourselves. In fact, most of the first act is a montage. First it is a montage of Strange being arrogant, then him being sad, then him learning magic. A whole third of the movie which we experience via divorced scene after divorced scene. But don’t worry, because the second two acts are just the repetition of the same fight scene, in which a wall folds in on itself, someone counteracts gravity, and there is a lot of jumping while wizards use glass shards and Wonder Woman’s lasso of truth to fight each other. Because Mordo is too focused on explaining other things to us, he never becomes a character in his own right, which makes the direction his character go in confusing. He is the most blatant and nonsensical sequel hook in a superhero film since Sinestro in the aforementioned Green Lantern, or in Marvel’s own Rhodey in the first Iron Man. The one thing we do know about him – that he is Strange’s most vocal supporter – makes his role in the third act make all the less sense.

I wish that I could say that Marvel’s streak of hiring amazing actors to play paltry villains has been brought to an end, but sadly once again they have wasted the likes of Mads Mikklesen on a character as empty shirted as Kaecilius. Mads brings as much energy and life to the character as he can, and gets both the best line and best joke of the movie, in a weird Abbot and Costello moment with Cumberbatch. But he is so underdeveloped, and his intent so separate from Strange’s journey that it is literally only bad timing that brings them together. Had Kaecilius’ journey happened concurrently with Strange’s, cooperatively even, instead of entirely off screen and completely unexplained, as it is in the film, we might have sympathized with him and his journey. If Kaecilius was falling out of love with The Ancient One’s teachings at the same time as Strange was adopting them, a conflict between them would have taken a personal edge rather than being very generally “for the greater good.” Certainly, Kaecilius’ philosophical disagreement with The Ancient One might have carried more oomph if we had witnessed their falling out rather than hearing about it second hand. I also feel that if Kaecilius and Mordo’s character had been merged, both would have benefited greatly.

The one character I had no fault with was Wong, possibly because he is such a minor character that he seemed to be much more fully realized. We know his motivations, we understand his position, and his role is clear cut and fulfilled. He’s just doing his job, and automatically goes to the top of bad ass fictional librarians. The same cannot be said about Palmer, who isn’t even relegated to the girlfriend role. Here, she’s already the ex. She doesn’t even really serve as motivation for Strange reclaiming his former life, as he makes consistently clear that he’s more interested in his career and reputation than he is her. She serves no more role than a couple other minor characters might have, and feels included so that the film could have another female character. This role certainly won’t Marvel’s terrible PR about their female characters. In fact, between Palmer and the way the Wasps were treated in Ant-man, I’d say they are getting even worse at female characters.

I will say this about the film, it did manage to put a new spin on the Standard Superhero Finale, in which something is destroyed in pornographic detail while the hero punches something repeatedly, and for that Scott Derrickson earns my respect. Without going into spoiler territory, the confrontation with the Big Bad is one built on logic and patience, and the set piece feels like a direct reaction to all these movies featuring explosions and huge chunks of cities being reduced to rubble. Unfortunately, drug trip-inspired visuals and a clever ending doesn’t make up for the lack of imagination and inattention to character throughout the rest of the film. When the most excited I was during the entire thing was the post-credits sequence, teasing an entirely different movie, you have failed completely at your job. And I suspect more of that blame lays at the feet of the ever forward looking but rarely present attentive Marvel Studios.
Share on Facebook Share on Twitter Share on Google Plus