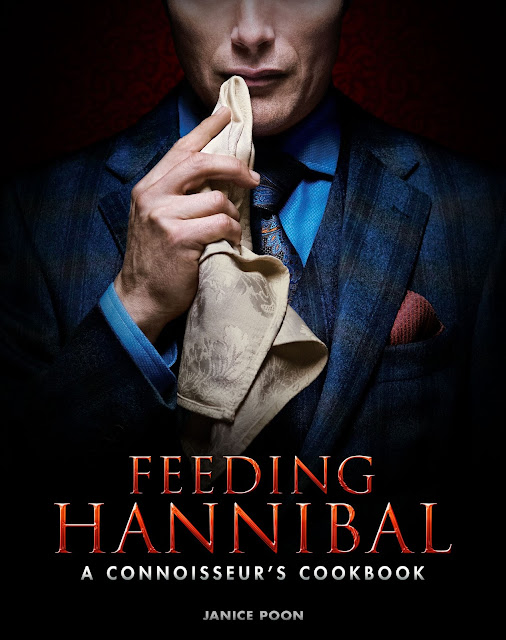 In which an old friend comes for dinner.

Hannibal, long time readers will be able to attest, may well be my favourite TV show of the last ten years. Few other shows have stirred in me the same passion, dedication and hunger as Bryan Fuller’s reinvention of Thomas Harris’ sociopath. I remember the first recommendation of the show I made to a friend, that the show treats violence as other shows treat food, and treats food as other shows treat violence. Quite rightly, in a show featuring a refined cannibal, the food was given almost pornographic prominence. Also given a show that made minute and exquisite use of the visual medium, the long, salivating shots of the meals prepared were enough to drive viewers to hunger pains. Never has rack of man looked so appealing.

This was, behind the scenes, due to Janice Poon, the food stylist for the series. Food stylist isn’t a job you often come across, but it was her job to make the food look as good as it did. A point of clarification, she was not the culinary consultant on the show, that was José Andrés (the man credited with bringing tapas to North America). These two, with Bryan Fuller, would create a menu for each episode together. Fuller would approve what was being served, Andrés would build the recipe, and Poon would assemble the piece for maximum visual effect. She was very good at her job, and chronicled her efforts on the Feeding Hannibal blog. This blog has now been assembled and expanded upon in the form of a cook book.

In terms of the genre, Feeding Hannibal is no different than any other cook book. The theme is simply the food and style of Hannibal Lecter, rather than slow cooker recipes or 1000 and 1 Things To Do With Corn. Despite Hannibal being a gourmet chef, this book is really a beginner’s guide to developing an eye and a tongue for finer foods. The book begins with a general instruction manual, providing a brief outline of the sorts of tools, pans, dishes and kit a person should have in their kitchen, and will need in order to make these dishes effectively. This is followed by a primer on how to chop foods, make broths, and form sauces. These aren’t recipes but a brief technique training. This is not to say that if all you’ve ever done is make macaroni and cheese in the microwave, you should be able to pick up this book and gain a basic understanding of how to prepare fine foods. Rather, if you are able to cook, this book could help bump you up into more illustrious company.

The book is plainly and clearly written, the recipes presented as Everyman alternatives to incredibly rich and complex dishes. Part of this is the product of its birth; Andrés’ recipes were built to suit Hannibal’s tastes, whereas Poon was crafting these dishes on a budget, for maximum visual appeal and replication (in order to have enough to film multiple takes over the course of a day). Therefore, some of the recipes are homages to classical dishes rather than examples of them. There is an inclusivity to them, making accessible via general stuff you would find at a good supermarket (or butcher), recipes that might otherwise be out of a person’s league. Additionally, there are adaptations of dishes to suit the filming process. For instance, the kibbeh tongues aren't tongues but a combination of bulgur and ground beef, or the clay baked thigh has been replaced with chicken wrapped in bacon.

Each recipe is either taken directly from an episode (rare were those that didn’t feature food of some kind at some point) or inspired by an episode or character. For instance, while we saw Will trout fishing frequently in his mind, Poon imagines how the day’s catches might be prepared for the table that evening. These flourishes fit the thesis of the book and the show, which is that food is a deeply personal thing, both the meals we prepare and the meals we enjoy. On Hannibal, the food reflected the emotions of the scene or spoke to how Hannibal viewed those he was eating, and eating with. If a recipe has a real world history, Poon gives some background. Or, if the meal has some significance to Hannibal, she delves into what might draw him to that particular dish. Where relevant, the recipes are accented by anecdotes about Poon's experiences on the show, such as Mads Mikklesen breaking an egg over a knife in Mukozuke. Perhaps the thing missing most from the book is what made her blog such a great read, were the steps she took to discover how to take the recipes Fuller and Andrés had settled on, and make them work for the show. The process she undertook to create artificial ortolans out of marzipan, for instance. Some of this process remains in the finished product, as she includes recipes for both a faux fois gras and a vegetarian alternative, which she prepared for Laurence Fishburne and Gina Torres respectively. The substance of the food remains, but the substance of the process is cast aside.

The book is arranged in the standard sections: breakfast, apps, meat, fish and veg, sides, desserts, drinks, style. Each recipe is augmented with either pictures taken from episodes of the final presentation, or of Poon’s sketches when attempting to create the design that matched what Fuller’s scripts needed and showcased Hannibal’s flare, like storyboards. These sections include plenty of pauses where she speaks on the topic of a specific food, like oysters or ham, and how these foods should be treated before you even get near a recipe. The book closes with something of a style guide, a perspective on presentation from Hannibal’s point of view. How a rose of prosciutto, or how a sauce is ladled onto a dish says as much about the meal, and changes the meal, as much as the preparation. It also includes a cocktail section which, Alana’s arm fermented beer aside, are all original creations based on the tastes and themes of the show, and how they would pair with certain recipes.

For someone like me, who enjoys spending time in the kitchen, especially if he knows guests will be arriving, this book is a treat. An excuse to take people beyond their comfort zone and try something that tastes and looks outside of the usual. It also provides us Hannibal fans with an outlet for all those tummy rumbles we felt over three seasons of the series. Perhaps a viewing party, where you eat what they eat, might be in order. Happily, this isn’t a book just for Fannibals or culinary aficionados. Poon has made an accessible tome that introduces even the most basic of cooks to different corners of the kitchen, and is a worthy addition to any cook book collection.
Share on Facebook Share on Twitter Share on Google Plus