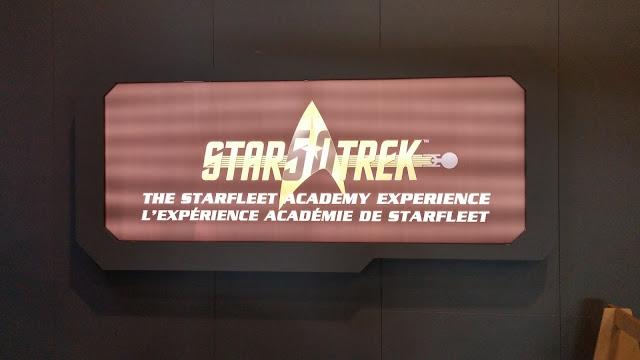 In which we go, boldly, where we've been going for 50 years.

The question was asked "why hasn't there been more promotion of the 50th Anniversary of Star Trek," and that is a great question that I will answer, in another way, at another time. But a weirder and briefer answer is that Canada is going out of it's way to promote the anniversary. Canada Post recently unveiled a collection of commemorative stamps, and the Canadian Mint has produced a series of collectible coins. This might seem weird at first, but Canada has a long and proud connection to Trek - William Shatner and James Doohan were both from north of the 49th; Vulcan, Alberta has went out of it's way to be a Trekker's destination; and the recent announcement that the new Bryan Fuller-run series will shoot in Toronto brings the the Final Frontier to the Great White North. And really, Canada is only giving the 50th anniversary the respect it deserves.

Add to this celebration a new exhibition, which I was lucky enough to view last week as it opened to the public. The Canadian Aviation and Space Museum in Ottawa is hosting Star Trek: The Starfleet Academy Experience from May 13th until September 5th. Much like when the Game of Thrones exhibit launched in Toronto some years back, Ottawa is the first stop on what will be a multi-city North American tour. And like the GoT exhibition, this celebration of 50 years of Trek is a combination of interactive experiences and authentic props and costumes from the entire history of the franchise. Well... I say entire history, but really it's just the series. The reboot movies are almost completely excluded. In the entire exhibition, I say only a single reference to the current film series, in the form of a lone, blurry image of Chris Pine set among the images of the other Captains.

In a way it might make sense though, as the artifacts present in the exhibition are almost entirely the property of Martin Netter, famous for having the largest collection of authentic Trek props and memorabilia on the plant. After more than 30 years of collecting, the bulk of this collection consists of items from the original series and Next Generation. And really... who wants to see Zachery Quinto's ear casts when you can look at a disembodied prop head of Brent Spiner? 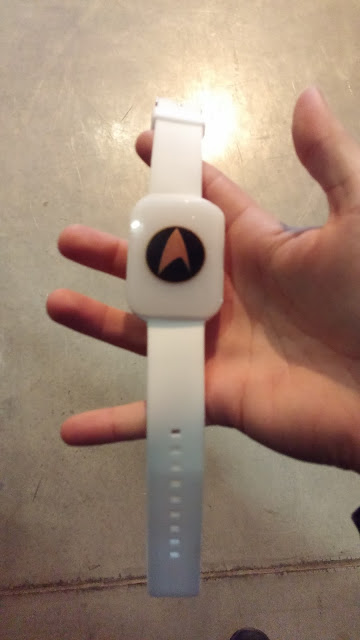 The exhibition is set up so that visitors are treated as academy recruits, and that as you revisit the history of the series, you are being being trained for a position on a starship. It's a clever hook, and creates the interactivity. It also informs the layout of the exhibition. 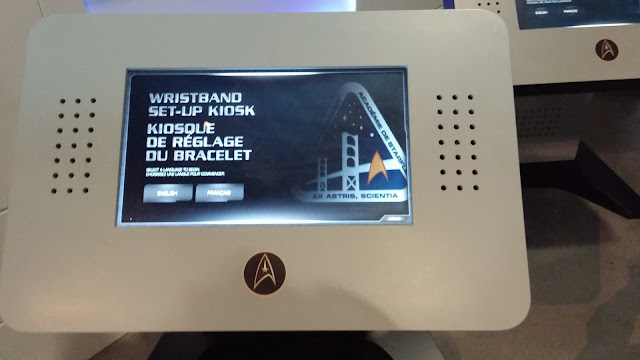 Upon entering the event, you are given a wrist band, and invited to set up an account. This wristband collects the data from each station as you progress through the exhibit, and tabulates your results. All of this is explained to you upon entering by an honest to gods hologram. 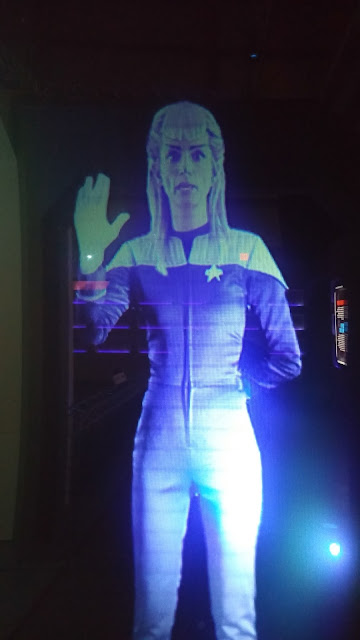 The acting present throughout the exhibit is not great, and while the exhibit is sanctioned and licenced by CBS, it straddles the line of official. you definitely get the sense that, if CBS had put some serious money behind this, they could have gotten someone like John de Lancie to narrate the various sections. But that is a minor quibble. the hologram explains that as you progress though the exhibit, your proficiency in each of the major areas of study will be judged, and at the end, you will be assigned a specialty based on your results, which will then be emailed to you along with various other interactive elements you encounter throughout. 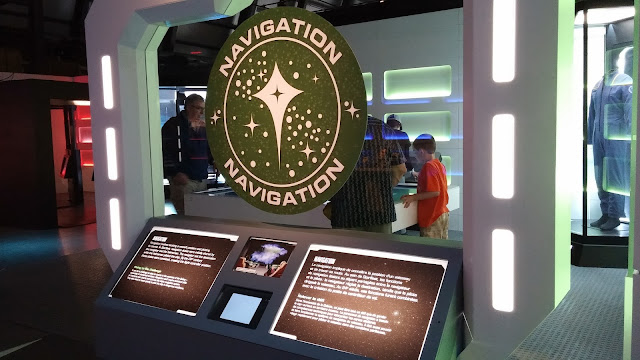 The exhibition is broken into the various departments that exist on a starship: command, science, engineering, medical, navigation, communications and tactical. The props, costumes, and displays are arranged according to these distinctions. For instance, Dr. Crusher's blue lab coat is on display in the medical section, along with a selection of medical tricorders and hyposprays from throughout the various series. 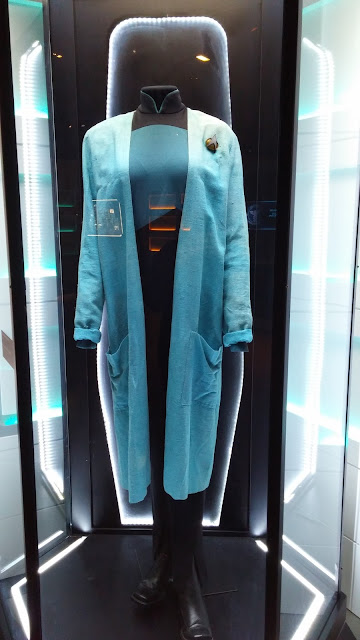 Each section includes information on the series, as presented as biographical fact. This information than informs the activities present in each section. In communications, you learn to speak Klingon; in Science you conduct a planet survey; in Navigation, you must guide the Enterprise through a maze of threats and dangers; in Tactical, there is a bloody difficult phaser target practice.

Not all these activities were working properly when I went through, though I did go through on the first day. there were glitches, and one activity, a medical tricorder test, wasn't working at all. The instructions on some of the activities were also vague, meaning if you could get it to work, it might take a couple tries to figure out exactly what you were meant to do.

The rest of the exhibits are what you might expect. Props from across all eras on display together, such as communicators... 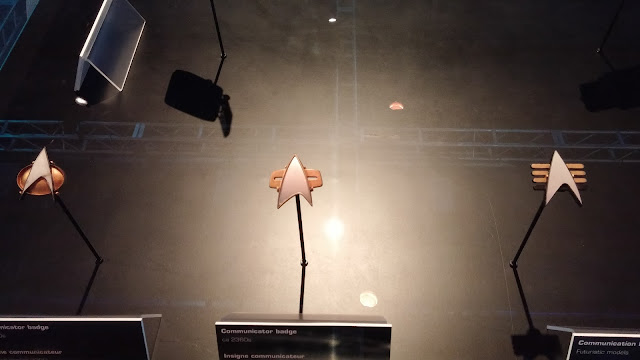 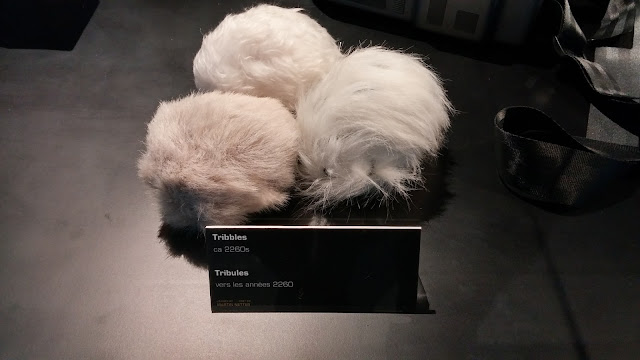 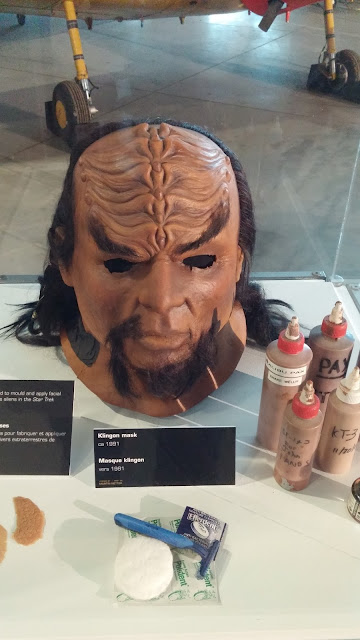 And even models that were used during filming, back when models were used rather than just CGI. You know, back when things looked real, and were the result of impressive physical discipline, rather than digital mapping and wonky physics. 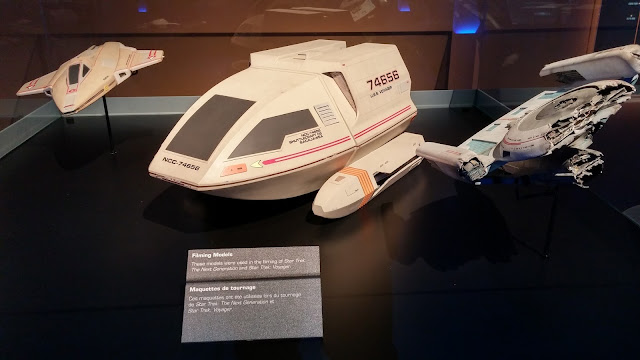 Considering how utterly lacking the NuTrek material was, it was almost impressive how much stuff from Enterprise was present, considering it's reputation among fans, and that this is a fan collection. 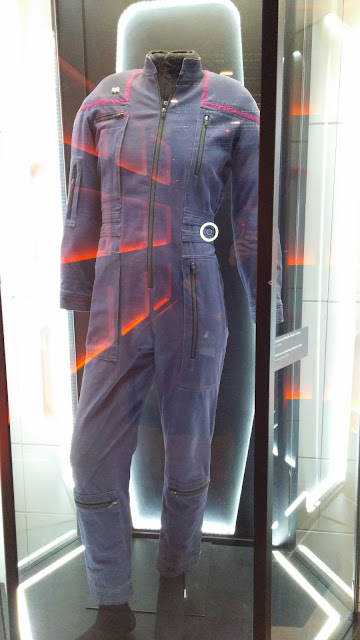 Again, because everything was sorted according the relevant departments, the Captain's uniforms were all bunched at the end, making a hall of glory just before you exit into the final module. Expect this to be where the largest crowds are, everyone scrambling to get a look at Kirk and Picard's uniforms, and giving the cold shoulder to Janeway's jumper. 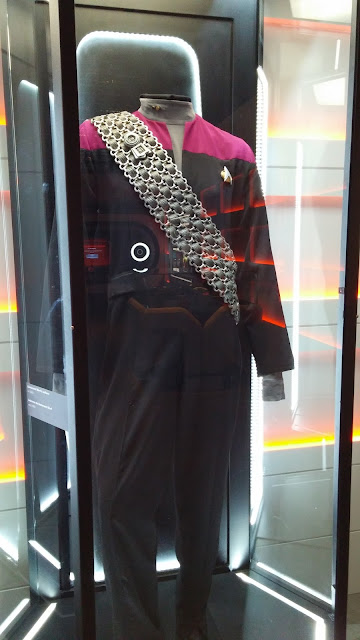 As you might be able to tell form some of these photos, there is significantly harsher lighting in the museum than these display cases can handle, and in many cases, you have to stand in a shadow-casting position in order to pier through the glare and at what you actually want to see. While this is often an issue at galleries, this collection augments the problem by filling every space bit of space and inch of wall with Trek style lighting, which means every room is washed out with light of various colours and intensities. The designers really need to scale back the lighting, or at least swap out the 60 watt bulbs for some forties. 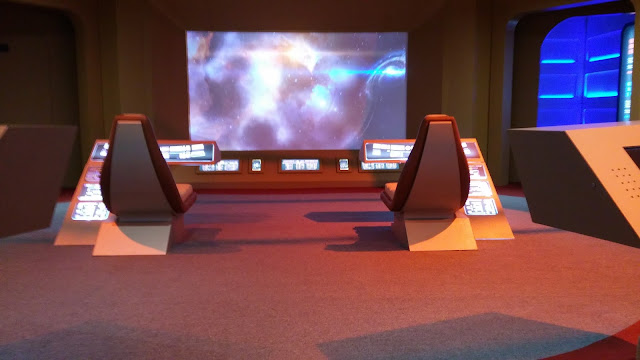 You exit the exhibition through a full scale replica of the Enterprise-D bridge, from Next Generation. Here, you can have you picture taken sitting in the Captain's chair, prowl the rear stations, or take a seat at any of the auxiliary stations and take part in the Kobayashi Maru test, easily the longest and most difficult of the activities. It takes for damned ever, and isn't as engaging as some of the others, but you are defending against a Klingon attack while sitting in Commander Riker's seat (shoulder uncomfortably jutted out in front, if striving for authenticity), so depending on your level of nerdishness, you'll likely be very happy with the experience. 12 year old me was supremely jealous, I can tell you that much. 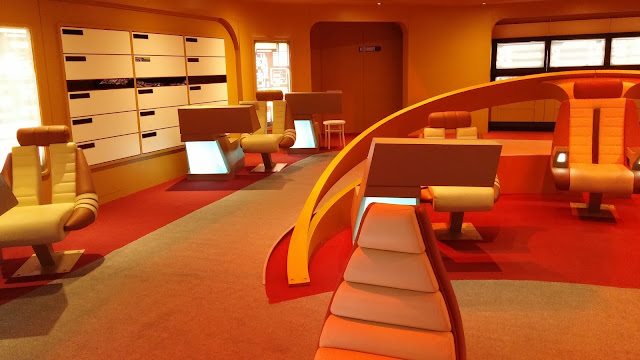 If you are a fan of Trek, in any incarnation, this is a solid trip. Total time through is around an hour and half, depending on crowds and how often you decide to retry the Phaser activity because I can get a better score dammit, so  don't make it the fixture of your entire day. Entries are timed, so it pays to plan ahead, and the number of people inside the exhibit at a time are limited. It doesn't have as much memorabilia as, say, the Game of Thrones or X-Men exhibitions I've seen previously, but considering that all of this came from a single guy's basement, it's a damned impressive collection. And the activities, as cheesy as they occasionally were, filled in the gaps nicely.