MR. Clark 25.2.13 Clue , Reviews , Sherlock Holmes , Toys Edit
Because of a complete lack of upcoming films that interest the author in any way, this is part of a spring series of reviews of things other then motion pictures.

I love the game Clue. Love it. I own every North American version of the game produced since the 1960's, except the Harry Potter version (which wasn't officially licenced anyway). I love the structure, the concept, the characters, the game play. I love the infinite variations that are possible within that framework, and I love that it is a game that people can sit down and play, and not feel an overpowering need to kill each other before game's end. In fact, you can usually sneak in three or four games before that feeling bubbles up, and then it's more about who your opponent is as a person then it is about the game.

When I found out that the BBC was licencing a Sherlock edition of Cluedo (the original and still British name of the game, a play on an older and now less well known game Ludo), I knew two things: first, very clever BBC, I see what you did there. And two, that I must have it. I must make it mine, it would be mine and I'll cut anyone who tries to stop me.

Well, after waiting for the Christmas parcel rush to pass, and without any unnecessary bloodshed, I have made it thus. And all excitement and anticipation I felt was immediately... undermined by the product being rather disappointing.

Hit the jump for the review. Which contains no spoilers. Because it is a board game. Sherlock is, of course, perfectly suited for the Clue franchise. It is a game of deduction, and Sherlock Holmes is the patron saint of that. However, the BBC has yet to market the show in the same way that they do Doctor Who, or Top Gear. Sherlock merch is slow coming, much like new episodes of the series itself. This game represents the broadcaster's first foray into Sherlock licencing, and I can only hope that next time they put a little effort into the final product, rather then agreeing to the contract at what must have been the eleventh hour, and resulting in what is obviously a rushed product.

Straight away things are coming part. The Sherlock title logo is out of focus and slightly pixelated, as if the product designs grabbed the first example off of Google image search, resolution be damned. 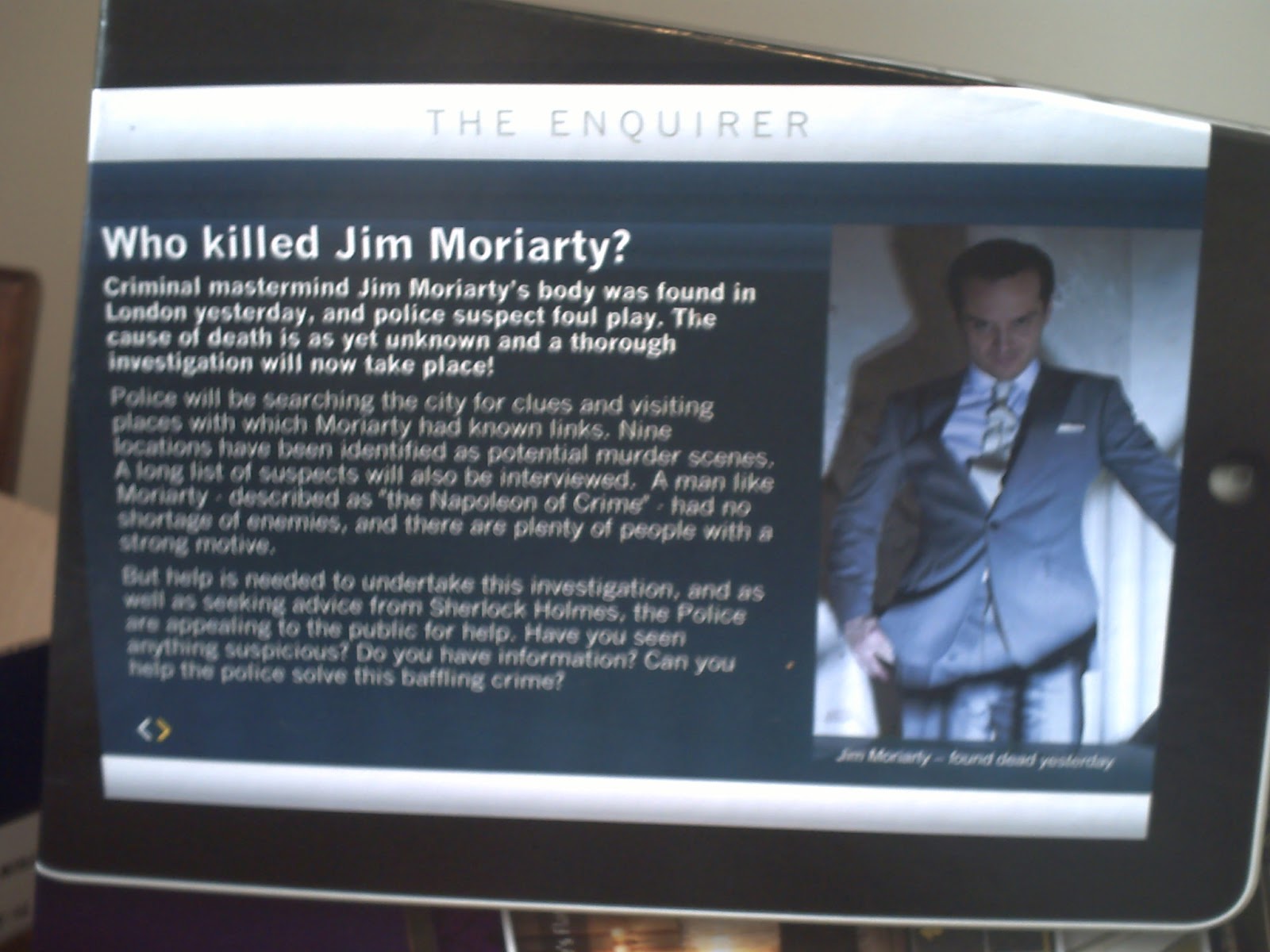 Every version of Clue has, at its core, a question which forms the foundation of the gameplay. As questions go, "Who killed Moriarty?" is a logical choice. Few of the licenced Clue products have such a clear-cut and obvious plot already set. As I said, Sherlock was almost designed to be adaptable to the game's format. 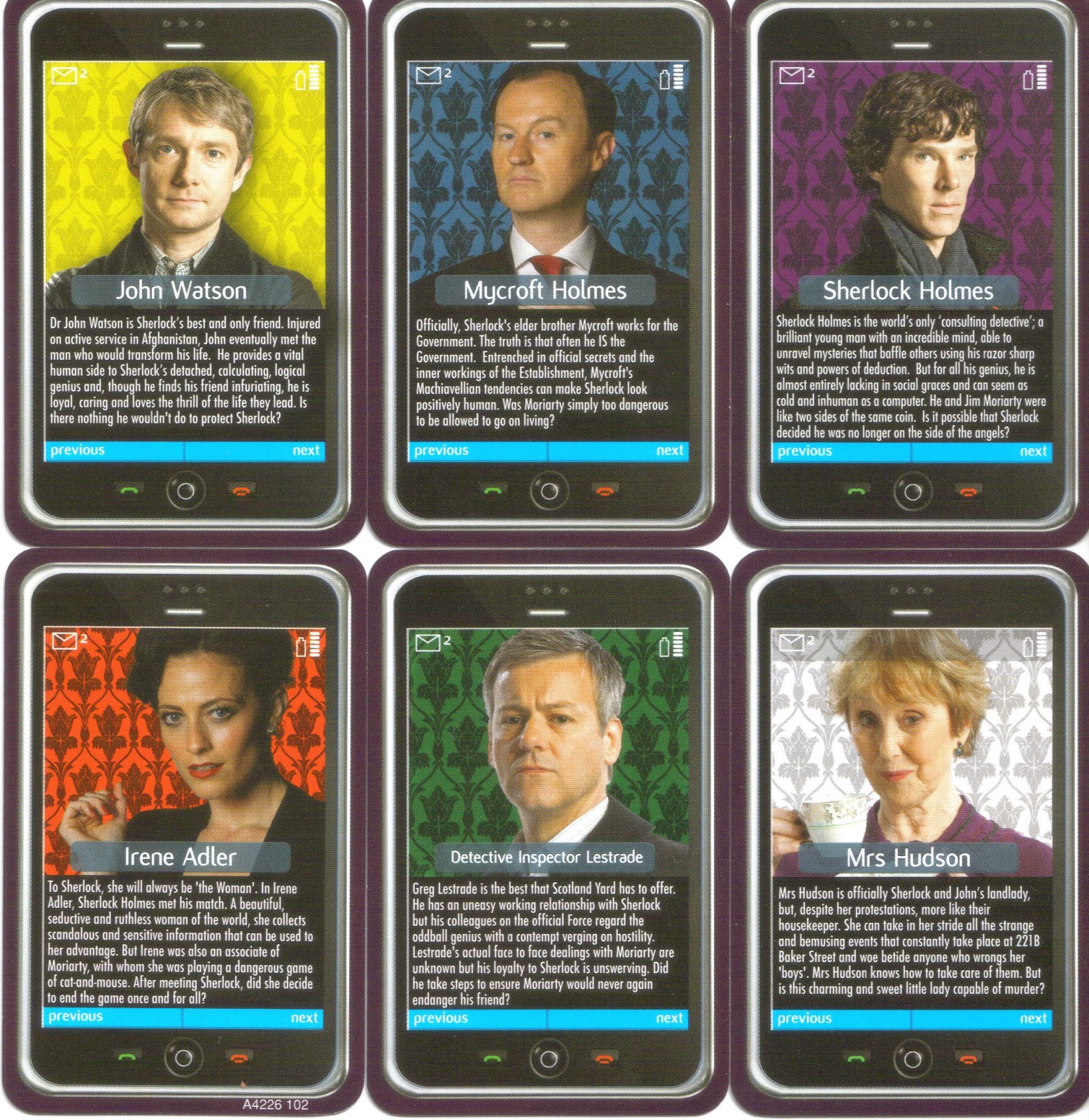 The character cards are the only example of any imagination being put into the game. When it was first announced, I suggested that Molly might have been a wiser choice for the role of Ms. Scarlett, thus making all playable roles recurring characters on from the series. But I can understand the desire to include Irene Adler, considering she is the most recognisable female character from Doyle's books, and that Scarlett has traditionally been viewed as the seductress archetype within the game.

The character cards are formatted as dossiers being read on a smart phone, which I thought was a brilliant idea. It, much like the show, is a fantastic way to make a modern update to a traditional element. If only it were an element that had been repeated in any way. Despite the fact that both the locations (as GPS or maps) and the weapons (as evidence records) could have been used in exactly the same way, there is no indication that was ever considered. As it is, the character cards are both the most interesting thing about this edition, and the clearest example of the wasted opportunity that is this game. 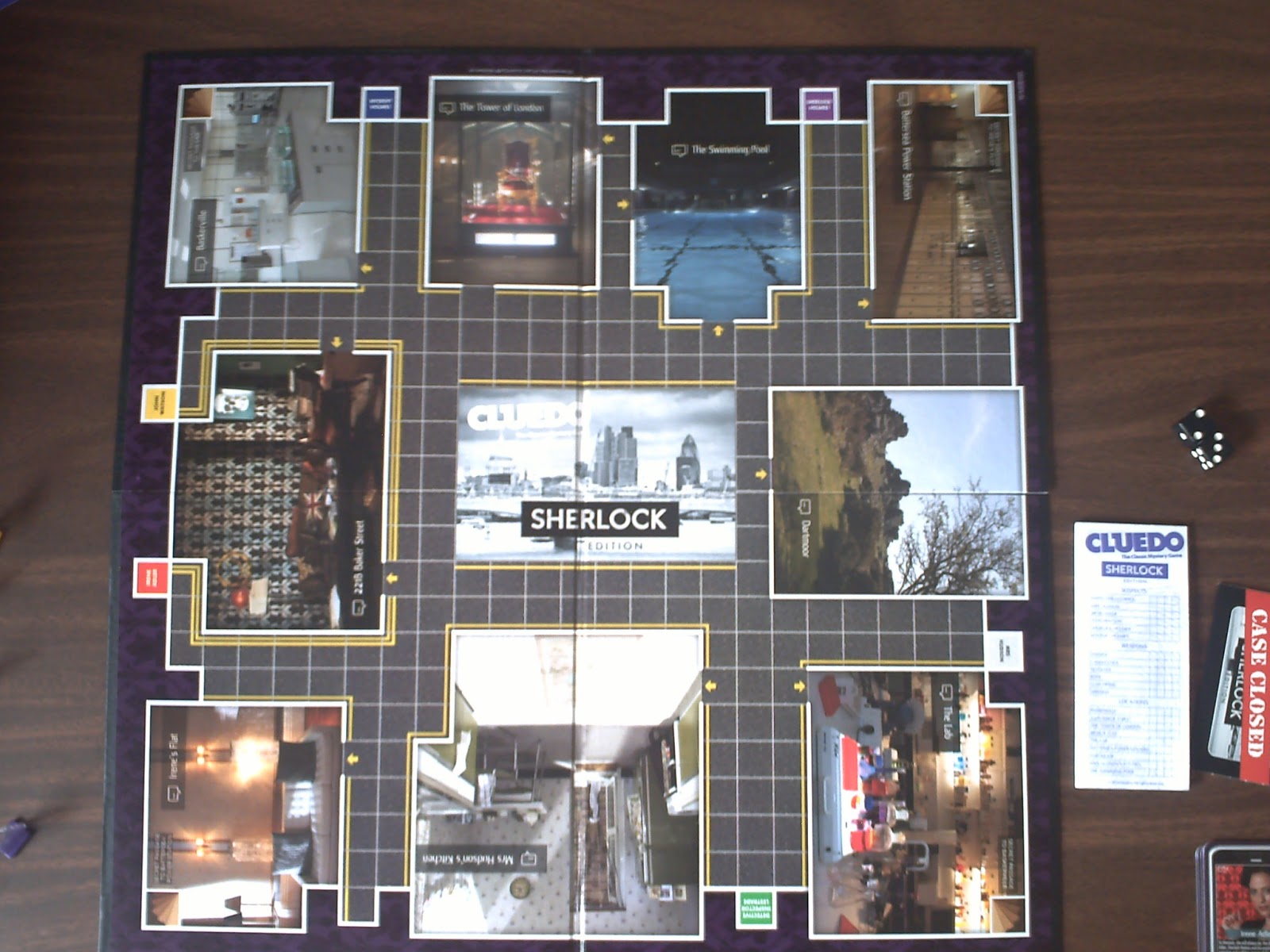 The board is the traditional Clue board, with the nine locations. In this case, nine locations taken from the series. Some make sense, like 221b, Mrs. Hudson's Kitchen, Molly's Lab, and the Swimming Pool from the finale of series 1. Some make sense, but seem redundant: Irene's Flat is nondescript, Baskerville lab and Dartmoor are both included, the lab thus competing with The Lab. Others stretch the imagination as to why they were chosen: the Tower of London, and hilariously the Battersea Power Station, which seems like a last minute, grasping at straws selection.

What about Lestrade's office? Or the rooftop where Moriarty actually dies? Or Watson's therapist's office, or half a dozen other locations of diminishing logic, that all make more sense then the Battersea Power Station. 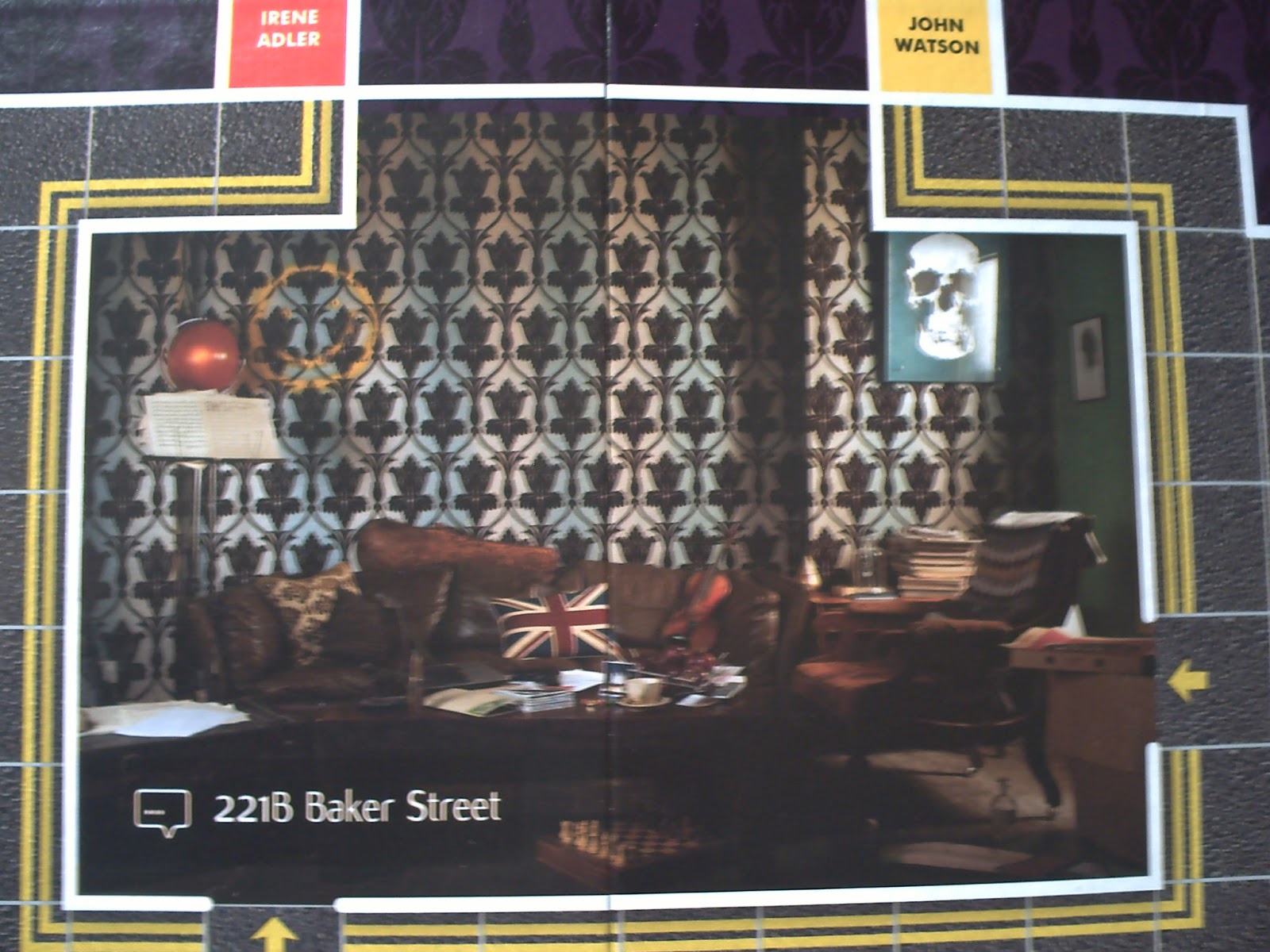 The board images themselves are little more then set pictures. Considering that this is the BBC, and Sherlock is one of their most popular and profitable properties, this seems like the cheap direction to take. By way of comparison, The Office (US) edition of the game, licenced by NBC, features CG drawings of each work space in the show, from the top down perspective of the more modern games. It showed effort and intention, which clip art does not. 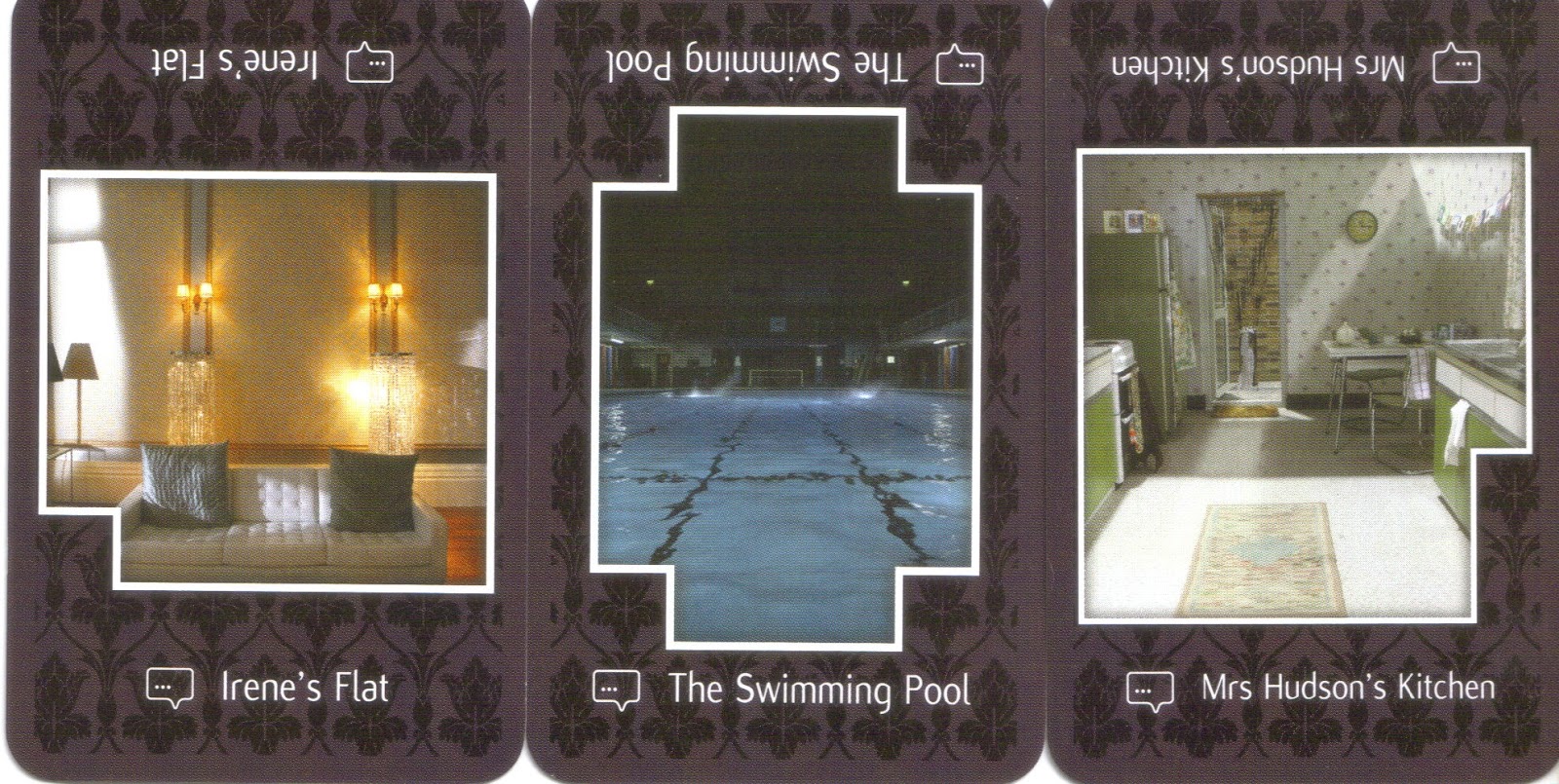 The location cards show the same level of disinterest, literally just cut and pasted from the board image and placed on the card background with as little effort as possible. Gone is the innovation of the smart phone idea from before. But, at least they managed to come up with locations that had a connection to the show. Which is more then can be said about the weapons

Literally every licensed version of Clue I've ever played has included six weapons that are specific to the licence. Seinfeld Clue had a bowl of cereal. Scooby-Doo Clue had a ray gun. Office Clue had a George Foreman Grill for the love of gods. But not this one. They used the original, basic Clue weapons. Now, I can understand and excuse the use of simple, nondescript character pieces, but personalised weapons are expected, necessary even. The new and controversial Discover the Secrets edition weapons would have made more sense. But really, a 19th century revolver screamed Sherlock to the designers?

Off the top of my head, I can think of six better alternatives then the nearly 70 year old options: a bottle of poison and a modern pistol (A Study in Pink), both included in the Discover the Secrets; a smart phone (A Scandal in Belgravia); a bomb (The Great Game), as from the Alfred Hitchcock Clue; a teacup (The Blind Banker) and a bloody magnifying glass (because honestly). But these would have required entirely new pieces being cast out of pewter. But that would have taken time and shown that Hasbro and the Beeb actually put some time and money into the project rather then just churning it out in order to make a quick buck.

It's a nice thing to have in the collection, and as a Clue game it succeeds on all accounts. There are characters, locations, and weapons. The game can be played. Bully for it. But as a piece of Sherlock merchandise, I can call it nothing but an abject failure, a wasted opportunity and a disappointment. I won't be able to live with it like this, and will have to "hack" it in order to make our continued cohabitation tolerable.

For anyone out there who hasn't done so already, do not waste your money on this game. If you already own a version of Clue, you've as good as already got it. And if all you're interested in is a bit of card with Cumberbatch's face on it, there are cheaper ways of getting one of those as well.
Share on Facebook Share on Twitter Share on Google Plus