Home / Featured / Rant / [Opinion] - Welcome To The Future, It's Terrible

[Opinion] - Welcome To The Future, It's Terrible 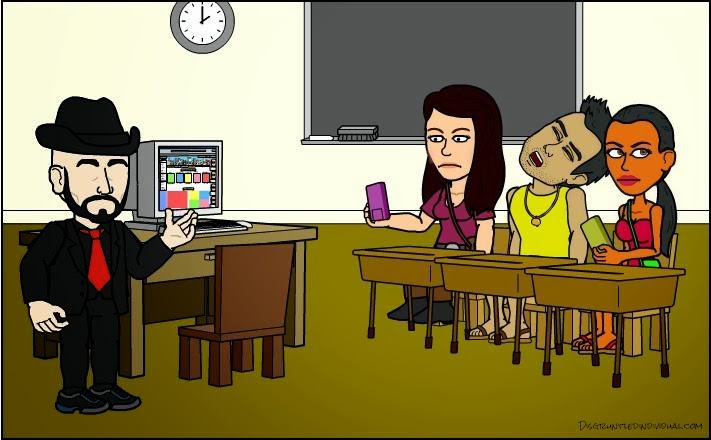 We have a problem: the future is going to suck. And I'm not talking about five hundred, two thousand or deep time and a half from now, I mean the next thirty years. Because thanks to a period of technological advancement not seen since the industrial revolution, we are now a completely digital society. Our books are digital, our televisions are digital, seven hells even our eye glasses are digital. There are apps for everything, and the word "phone" is the least indicative name, a relic of a bygone era, for what the majority of the population carries around in their pockets. They are thinking machine super computers, scaled down and discounted for market competition. The thing people are swiping their fingers over while they're meant to be driving are more powerful than the first four computers I owned, combined.

And therein lies the problem. Because we have a generation of youths for whom technology is completely ubiquitous, and because of that have no learned skills when it comes to maintaining, up keeping or a third thing that means the same as "fixing" these machines. They have only basic skills, little more than the ability to turn it off and turn it back on again. And, thanks to a complete lack of deductive reasoning, an entire generation is without the ability to recognise a problem, understand the steps necessary to fix the problem, and than do so. Because in their lives, usually a computer does it for them.

Buckle up, because the future is now, and the future has terrible customer service. Hit the jump for more.


I'm sure this is the same for many of you, but my grandfather could fix anything. He came from that generation that didn't have as much, and made damned certain that what they did have worked. Car making a noise? Take apart the engine, give it a clean, maybe swap out a few parts. Fuse keeps blowing? Take the panel out, do some rewiring. Accidentally hit a deer? Throw that in the back, dress it, clean it, make sausages. This is not a character trait that has trickled down through the generations. Give me enough time and lumber, and I could probably build a decent enough house. But it wouldn't have any power, because the only thing I've ever been able to make electricity do is set fires. Give a hammer to your average modern teenager, and after they've taken a few swings with the pein end, they'd probably wander off to find a signal so they can update their Twit-Book.

This has gotten only worse with the introduction of computers. I remember the first computer I ever saw. My chum's father worked for the military, and was given not only a 486, but also a secured internet connection. This was before the internet was a thing, so basically all it could do was remotely access the base's network. And it was amazing. Shortly after this, my school installed a computer lab of five 386's, on which we were allowed to do very little. The reason was two fold. One, the computers could do very little, beyond teaching us to type. And two, they were expensive and they didn't want us to break the damned things. A few years later, when internet came to the masses (and again, I mean working professionals and institutions that could afford it), a single computer with internet access was installed in the lab. Our computer class was divided up so that everyone got five minutes a period to "browse" the "world wide web." So, two minutes were eaten up waiting for it to dial up a connection (which it didn't always make, for all the effort it put into it), and another two minutes for the page to load, line by line. Which was fine, because everyone went to the same page. Because there was only one page back then. Or, at least, for us there was. It was a Simpsons sound board, and it was a credit to your worth as a human being on which quote from the first three seasons of the show you clicked on (gods help you if you picked Marge). In retrospect, I shouldn't be surprised the internet turned out as it has if it's original use involved a bunch of adolescents gathered around a computer listening to Nelson "Ha-Ha" over and over again.

Aside from our complete obliviousness concerning what this thing we were using would become, we respected and feared those machines. And, importantly, we recognised them as machines. They weren't a part of our lives, they were a tool that we encountered occasionally. Like a backhoe, or one of those wall mounted pressure cuffs in the doctor's exam room. And as such, we were taught how to use one, from the ground up. Our computer classes weren't just about learning how to manually boot Windows 3.11 from DOS, they were about opening the thing up and knowing where it's guts were. This was the standard. And because of that, if something goes hinky with my PC, I can open it up and with a certain degree of accuracy, fix it. Ask a modern teenager to fix a computer problem, and their answer would probably be "take it to the Apple store."

I encounter this problem every day. Youths who come with "world ending problems" that are ridiculously simple. "The question mark isn't working on my keyboard." "How do you change the line spacing in Word?" "Where is the internet?" A computer giving the instruction to press Alt+Ctrl+Delete to access a login screen, to which the youth bemoaned that they didn't know where the Delete key was. That one isn't even a skill, that one is just the ability to look down at the keyboard and read the keys. And yet, completely out of reach of their ability. And the reason, I feel, is because the current generation is the first in which computers have always been there. There was no introduction, no first date. They were born into a world where there was a computer in the den and a laptop in the briefcase. They've never known a way to search the internet that didn't involve Google (which, remember when certain search engines were used for specific topics, so you might have to use multiple engines to get what you needed). And now with the advent of the smart phone, not only are computers just another part of the background scenery, they are also and simutaniously an omnipresent force dictating their movements. So yes, they can record a video in high def, post it to YouTube, share that on Twitter, and Instagram a picture in old timey tint of them sharing it like it's second nature. But I doubt any of them now the difference between RAM and ROM. Or, what RAM is. Or what memory in a computer is at all.

This is because they aren't taught about it. Or, more accurately, there isn't an interest in knowing that stuff. Because a computer is just another box, like the TV, sitting in their home, and kids aren't amazed by them anymore. Look at a five year old playing Angry Birds on a smart phone (which, really, be better parents); they look so placid and almost bored. I wasn't young when computers entered my life, but I went at them like an infant at Christmas. They were new and amazing and something that needed knowing about. In schools nowadays, kids aren't taught typing. They aren't taught basic computer knowledge, like how to use hot keys, or troubleshoot software issues. Unless they take specific interest, and take specialised course, to enter the glamorous world of IT, the knowledge isn't there. We effectively haven't moved beyond the stereotype of the computer obsessed nerd, except now the stereotype is reality, and the nerds are the only ones capable of holding the world together, because people don't know how to reset their passwords.

Part of the problem too is a general lack of deductive ability. I've noticed, especially in the last five years, a sharp drop in youth's ability to understand A-B-C situations. When presented with problem A, most people are able to take action B, and produce result C. Now, when problem A appears, even if action B is stupidly obvious, they just sit there, unable to figure out what to do. The connection between action and solution never occurs to them. So they either stop working, wait until someone else fixes it, or use their ineptitude as an excuse for why they didn't finish. And it's frustrating as hell, because we're going to be expected to vote for some of these people one day. They'll be driving our public transportation, policing our streets and making our food. Our world is about to get a lot more dangerous, because simple problem solving skills are disappearing. This isn't Batman/Sherlock Holmes level thinking, this is understanding that if you leave milk out, it will turn into the worst possible yogurt then kill you.

The solution would be as simple as teaching children from a young age about basics. Basic problem solving, basic life skills, basic world knowledge. So when they drop their phones in the toilet, they can react like a reasonable person and not the sort of person who has their phone out near a toilet. Also, make them turn off their phones from time to all the time. It's not helping their social skills, which is something else we've completely given up on teaching them. Last Saturday night, in the heart of a university town, I glimpse two young lovers sitting in each others arms on a park bench, the soft glow of their phones highlighting them as they completely ignored each other. Aw, memories to last until the server crashes. For me personally, the solution is easy: down payments on a cave in Wales. No phone, no lights, no motorcar, not a single luxury. Just the damp and the knowledge that I won't be killed by someone who honestly didn't know what they were doing.
Share on Facebook Share on Twitter Share on Google Plus