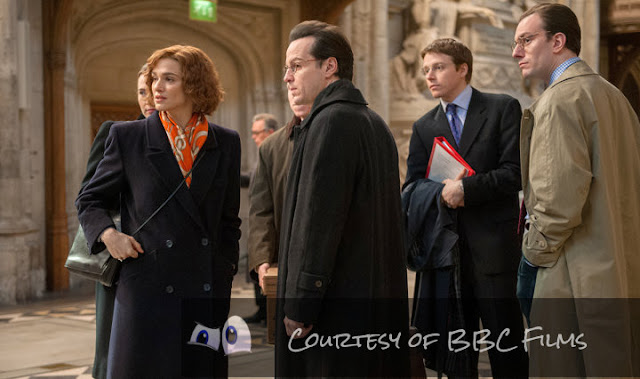 In which what is known to be true is held up against what is wanted to be true.

Denial is a film which, to my mind, highlights three terrifying acts of stupidity. The first is the Holocaust, against whom any number of incendiary adjectives can be leveled and not come close to capturing the true scope of horror. Labeling it a terrifying act of stupidity is about the tamest way that event has ever been described, but no less accurately. The second is the discourse, if you can call it that, propagated by deniers. The people, personified here by David Irving (played by Timothy Spall), who willfully ignore the facts in order to serve their own distorted perception of reality. The third, less obviously than the first two, is British defamation law, in which the burden of proof is placed on the accused rather than the accuser. This archaic practice is a symptom of a system which has not progressed beyond a presumption of guilt inherent to medieval class culture. I am an anglophile. I have thin Saxon blood in my veins, and have spent my life in awe of the British. Their culture, their wit, their steadfast adherence to not letting overt emotions get in the way of the constant fear of crippling embarrassment. We have a lot in common, that sceptered isle and I.

But there is also much about it which gives progression a wide birth. Easily caused by the institutional repression that is ingrained upon each of them, the English are slow to passion and slower still to taking up a just cause. There is a current to this film, which is at times is more over than under, of an impeachment against Britain. When Anthony Julius (Sherlock’s Andrew Scott) is explaining to Deborah Lipstadt (Rachel Weisz) about how England is a community which Irving wants to be a part of, and legitimacy is his ticket in, he speaks of a culture which would prefer if things weren’t made a fuss over. The legitimacy is merely the cover; the real issue is that he is drawing attention to himself. This is reiterated in a skin-pickling scene in which Deborah attends a dinner of the influential Jewish community. They deride Julius as a seducer, someone who seeks the spotlight. They chuckle away Princess Diana as if she were a dalliance to be forgotten rather than a human being. And they encourage Deborah to settle, which the vast majority of defamation suits are, so that there isn’t any unnecessary bother.

It helps the thesis that Deborah is American, that she spends the whole film reacting with passion and disbelief at the stoic, detached manner of the English system. That the film is constantly showing her inclinations in contrast to the measured approach strengths this approach. Even her benefactors, which the film goes out of its way to mention includes Steven Spielberg, and American backers for her fight were many and open with their support, while the British wanted very much for the whole thing to go away. The protagonist and antagonist, in Deborah and Irving, are very much passionate people too. They both fight and scream and claw at their positions, insistent of their correctness.

The difference is that Deborah’s is always coming from a place of absolute belief, while Irving – whether he honestly believes what he claims, or is oblivious to his own failings – comes off as more a barker, a professional rouser of rabble. His convictions never seem as true as his ego, and that everything he says has that manufactured edge of attention seeking. Meanwhile, in Julius and Richard Rampton (Tom Wilkinson), operate as the measured arm of The System. Deborah spends most of the second half of the film yelling through half tears and Weisz’ distractingly affected Queen’s accent, of how little Rampton seems to care about what is happening. Quite the opposite, like anyone, he cares too much. But The System works when enacted dispassionately.

So, here is the rub. The film seems to be a condemnation on the British System, and yet it sings the song of high praise as it moves into the final act of the patience of science, the exactness of logic, and the fallacy of emotion. It is a strange tonal shift, perhaps meant to mirror Deborah’s own acceptance of the system in which she has become an unwitting part. But ultimately (and personally, assuringly), it is reason and science that win out. Emotion is a ferocious motivator, but passion blinds. Deborah, for all her good intents, cannot see the damage that her passion would deal. Indeed, there are a weirdly large number of reaction shots from the judge and gallery in the court room scenes after Deborah has had an emotional outburst. They are almost pornographic in their immediacy and exactness. Nothing disquieted me – not even the long, lingering, haunting images of Auschwitz; or the single, out of place and jarring CGI scene of clawing hands behind bars – as those sideways glances and looks of disapproval.

The court case is a love letter to the accuracy of history. “People forget”, as Deborah is warned, and history can be distorted, but data proves events. I hate to harp on a single seal, but it comes down again to the notion of truth vs accuracy. The Holocaust is still recent enough that there remain survivours, or at least where were more when this case was before the courts in the late nineties and into 2000. Is less than one hundred years long enough for the tide of memory to have moved the banks of events, or can the impenetrable truth of reality still stand firm? The case is not at all about proving that the Holocaust happened, as Deborah believes. It is about showing beyond all doubt that anyone with the intent to deliberately reroute the course of history is doomed to be swallowed up in it’s current, so long as he is alone in his misgivings.

The film lives by its performances. The direction of Mick Jackson only rarely extends beyond point and shoot, and when it does get a bit flagrant or artistic, it seems disingenuous. Likewise, David Hare’s script does little to find nuance in the words. It is left to Weisz, who is a wonderful actress despite the accent she’s putting on, which rob her more passionate moments of true vigor. Wilkinson is understated, but don’t let that fool you into thinking he’s paled. His revile towards Irving is palpable, and his earnestness towards his case is inscrutable. He has a moment, mid-way through the film, where he confesses that he has always believed that he was a coward, which is as indicative of everything in his performance: utterly naked revelation, delivered with simply frankness. Andrew Scott is fun to watch as someone who knows how to get what he wants while actually doing what is right, and it is in his character that you get as close to a laugh in the film. His deliver is too quick not to inspire a chuckle, and he is so readily able to move from fiendish to approachable, you can see why the character is unwanted in polite society.

But it is Spall, as it often is, who steals the show. Here he plays a monster of obliviousness, whom you can’t help but feel utterly sorry for. A human comprised entirely of the Wrong Side of History, as it is often labeled today, all he wants is to be liked. You get the sense form the way Spall carries him, from the way he lightly twitches his face that this was always a boy picked last for games. When he is called a liar and a fraud, it hurts him more personally than professionally. That here is a man damning himself by holding himself up in the sun. You feel no sorrow for him, only an immense pity. Helpfully backed by roles from Caren Pistorious (whose character arc feels truncated), John Sessions and Mark Gatiss, the film really does gather some momentum, while at the same time playing exactly the opposite that a court-room drama is traditionally played. And that drama is not dependent on confrontation or spectacle, but sometimes from a simply human place.