Winter is Coming to Toronto 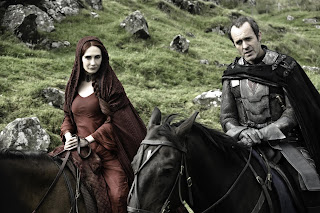 Some of your out there might be fans of the HBO series Game of Thrones. Some of you might be fans of the series of books, A Song of Ice and Fire, by George R.R. Martin, on which the show is based. If you are not a fan of either of these things, what are you, a communist? For descent folk, and Canadians, some good news. The TIFF Lightbox in Toronto, Ontario, Canada is presenting Game of Thrones: The Exhibit from March 9th to 18th.

"The exhibit will feature material from the show, including six costumes, important props, weaponry, tableware and banners from the different Houses, still photos and behind the scenes videos. The never before seen costume of season two's Melisandre is on display, as well as one of Daenerys' dragon eggs and King Baratheon's stag crown. The infamous Iron Throne will be right in the lobby of the Lightbox, where visitors can have their picture taken as King or Queen."

Now, that sounds pretty good, yes? Very little could make that sounds better, correct? Well what if I told you that it was free? That's right, the tickets are free! They must be reserved in advance, by contacting the box office, which can be done here. I don't know about you, but being able to sit in the Iron Throne, for free, gets my geek up.

And that's not all. On March 12th at 7pm, George R.R. Martin will take part in a live Q&A, give his thoughts on the translation of his books into TV, and discuss the upcoming sixth book in the series.

The TIFF Lightbox is a fantastic place for these sorts of exhibits. Last year, they were the Canadian host to the remarkable Tim Burton exhibition, using props, costumes, and a seemingly endless number of drawings from Burton's life to chart his progress as a film maker. It cost money, and was worth every penny. So, order your tickets for GoT while they're available, and don't tell anyone at TIFF that we would have been willing to pay for something this cool.
Share on Facebook Share on Twitter Share on Google Plus