Home / Featured / We Need To Talk About The Future

We Need To Talk About The Future 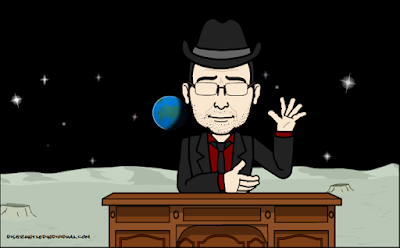 Hi there. Name's Clark. This is my space. And I want to use it to talk to you directly and personally for a moment. Maybe you are a long time and loyal reader, we've got a few of those around here, and they mean a great deal to me. Maybe you are a hobo in a public library using this site to quick cover the Korean pornography you are looking at on the express terminal (it doesn't matter, everyone knows what you are doing, and it weirds them out). Maybe you are just passing through. In any case, I want to thank you for the visit.

I've been doing this for a while now. Back when I started, it was a tool for myself. See, as a successfully unpublished author, I came upon a time where I needed to force myself to write something when I wasn't writing anything, if you get what I mean. I needed the structure. I needed the prompt. So, I bought a corner of the internet, and started writing about movies. And TV. And science, and dinosaurs and Lego. Basically, the things in life I love the most. And I enjoyed it. I did. I've had a lot of fun over the years. But then two things happened, separate but also simultaneous.

The first was that I realized that my aid had become my crutch. And that pouring time and effort into writing The Disgruntled Individual meant I wasn't putting that effort into writing anything else. And so, ideas that I had for other, loftier things just sat in their infancy because I felt the need to meet an imagined deadline to post an article about a rumour of a casting decision on a film that ultimately never got made. Long time readers might remember back when I would post five or six articles every single day. Like I had to keep pace with professional, commercial outfits for some reason. Now, I'm lucky if I get five or six out a week. But personally, I liked the content of what I was posting more back then. And I don't mean the casting rumours or spoilers or that horse shit, I never like that stuff. But I felt my reviews were stronger, I posted a lot more long form analysis and lists and reconstructions and generally fun content that I was proud of, and that I thought others would enjoy reading. And I haven't felt that of what I have been posting for a while. Like any writer, I haven't felt what I've been writing, and that hasn't sat well with me.

The second thing that happened was, in real life, I was fired.  Well... not fired. Downsized, I suppose is a more accurate term. "Made redundant." It was nothing I did, it was the company making a series of bad decisions. Point being, I suddenly wasn't doing a job I loved, and had spent ten years doing exceeding well. I won't say what exactly, though long time readers could probably put together a pretty good idea. The point is, I was good at it. It filled me with pride. I was "burdened with glorious purpose" in my life, and that purpose and fulfillment translated into my writing. And suddenly, I lacked that. And looking back on that, the result was a mild depression that I've spent the last year and half climbing out of. Again, long time readers will have noticed the shift. Fewer posts, longer breaks, less consistency. And more bitching. I got bitchier. I cop to that; that's on me. Although, to be fair, things outside of my influence got shittier. I mean... Jurassic World was just bad. Anyway, that's not the point. The point is, my real life influenced by literary one, and my literary life influenced my real one. The snake ate it's own tale, and things kept falling short.

The reason I write to you directly, mano a mano (which, did you know, does not mean man-to-man as many people think. It means hand-to-hand, and refers to unarmed combat), is to let you know that I'll be stepping away for a while. Part of this is logistical. In the real world, I am moving. After a couple decades rooted to a spot with nothing left for me, I am packing up my truck and hauling stakes, as well as other moving cliches. The result is, I will be without internet for a while. And, I'll need time to settle into my new arrangements, and the horrifically buzz-phrased "next phase of my life." Who knows, maybe I'll get around to knocking that "un" off "successfully unpublished author." But also, I need to reevaluate what I want The Disgruntled Individual to be. Make no mistake, I am not leaving for good. I very much want The Disgruntled Individual to continue, and absolutely intend to do so. However, it will not continue in the way it once did, nor in the way it has of late. For my own emotional well being, it cannot. Changes will be made. Structural and philosophical. No former posts will be removed; all the things I'm most proud of, and all the things I really am not will continue to be accessible in the archives. But change, like winter, is coming. And with it might come Something Else Entirely.

I don't know how long I'll be gone; not long I hope. And if it starts to look that way, I'll let you know. Until I come back around this way again, I leave you with a departure I've stolen wholly from one of my favourite old series. And NBC: for old times sake, after the jump, I've left a final, personal, parting message just for you.